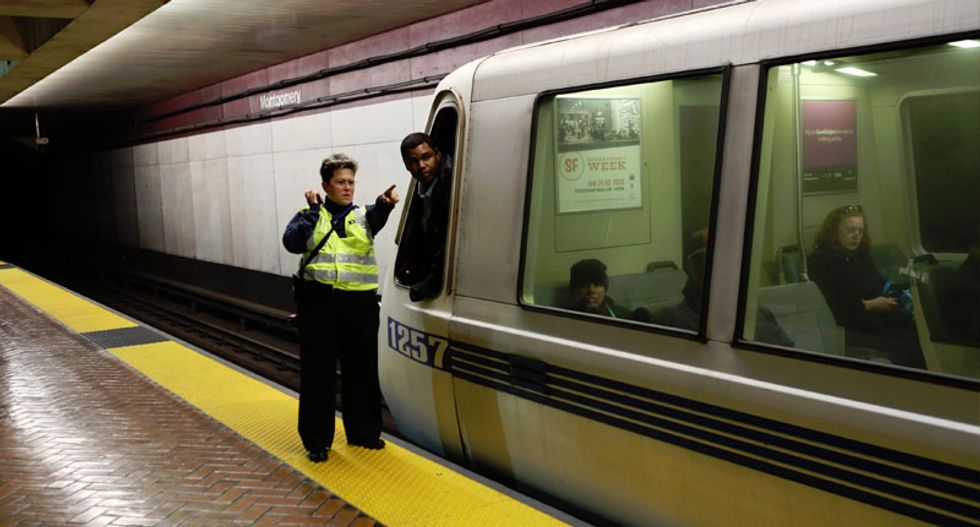 No injuries were reported, and two people were arrested on misdemeanor charges of interfering with the operation of a rail system, Bay Area Rapid Transit police spokesman Jim Allison said.

The protests, dubbed "BART Friday: No Business as Usual," targeted a commuter rail system that serves more than 400,000 riders a day in San Francisco, Oakland, Berkeley and surrounding suburbs.

With demonstrators gathered near the tracks, banging spoons on passing trains, officials closed the rail system's Powell, Montgomery and Embarcadero stations during the height of the morning rush hour, forcing glum passengers to stay on board well past their usual stops.

"Now I am in trouble because I have to try to figure out how to take the bus or muni. I work at a preschool and don't want to be too late," said Florence Biswas, 48, a pre-school teacher commuting into the city from Oakland.

"I want to support (the protesters) but at the same time I don't want them to do what they've done. This is very hard for people like me. I work at a school and the whole class is going to be screwed up," said Biswas.

The stations all reopened by mid-morning but another 100 or more protesters gathered at a downtown San Francisco federal courthouse.

According to the activists' Facebook page, Friday's action on BART is part of a planned weekend of protests dubbed "Reclaim King's Legacy Weekend of Actions," organized by a group known as the Anti-Police Terrorism Project and Occupy SF.

On Thursday, anti-police-violence protesters closed two sections of a major highway outside of Boston.

The Bay area group is also calling for charges to be dropped against another group of protesters known as the Black Friday 14. Those activists were arrested in November after chaining themselves to a train in Oakland.

That protest was part of a wave of actions after a Missouri grand jury declined to indict Ferguson Police Officer Darren Wilson in the August shooting death of black teenager Michael Brown.