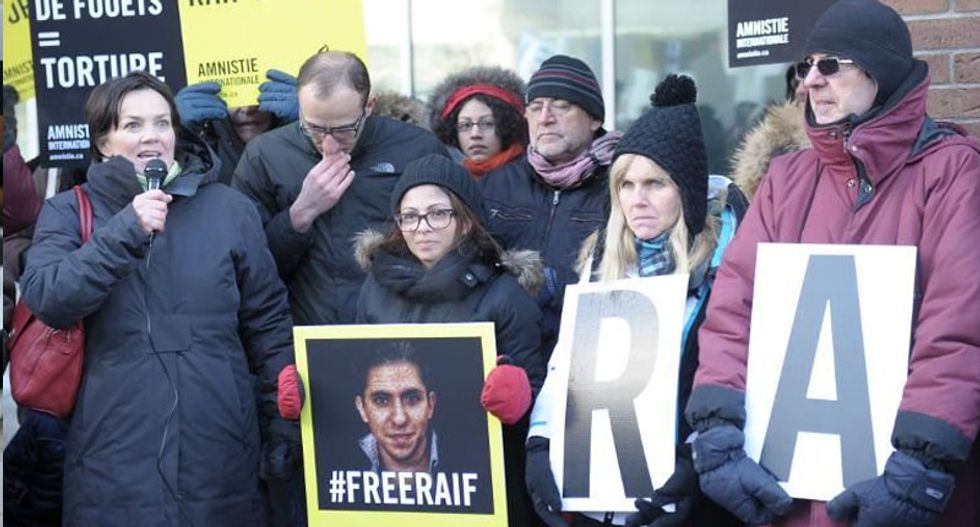 Ensaf Haidar(C), the wife of Saudi Blogger Raef Badawi, holds a vigil in Montreal, Canada, on January 13, 2015, urging Saudi Arabia to free her husband who was flogged for 'insulting Islam' (AFP)

Saudi Arabia postponed until next week Friday's flogging of a blogger jailed for insulting Islam, citing medical reasons, a week after he received the first 50 of 1,000-lash sentence, his wife said.

Raef Badawi received the first whipping in public outside a mosque in the Red Sea city of Jeddah, sparking an international outcry and a campaign by Amnesty International and others for him to be freed.

Badawi is expected to undergo 20 more weekly beatings until his punishment is complete.

"The prison doctor saw (Raef) Badawi's health does not allow his flogging today," his wife, Ensaf Haidar said, speaking to AFP by telephone from Canada, where she has sought asylum with her three children.

Haidar said Friday's flogging was postponed because her husband's wounds had not yet healed, an explanation also given by Amnesty.

"But it will probably still take place next Friday," she said.

During a medical exam ahead of the flogging, "the doctor concluded that the wounds had not yet healed properly and that (Badawi) would not be able to withstand another round of lashes at this time," a statement said.

It added that the doctor recommended the flogging be postponed until next week.

"Not only does this postponement... expose the utter brutality of this punishment, it underlines its outrageous inhumanity. The notion that Raef Badawi must be allowed to heal so that he can suffer this cruel punishment again and again is macabre and outrageous," said Said Boumedouha, Amnesty's Middle East and North Africa deputy director.

In September, a Saudi court upheld a jail sentence of 10 years and 1,000 lashes for Badawi, who has been behind bars since June 2012.

Badawi is the co-founder of the now-banned Saudi Liberal Network along with women's rights campaigner Suad al-Shammari, who was also accused of insulting Islam and arrested last October.

Shammari has said the charges against Badawi were brought after the Saudi Liberal Network criticised clerics and the kingdom's notorious religious police, who have been accused of a heavy-handed enforcement of Islamic sharia law.

In July 2013, a court initially sentenced Badawi to more than seven years and 600 lashes, but an appeals court overturned the ruling, sending the case back for a retrial that resulted in a harsher sentence.

Rape, apostasy, murder, armed robbery and drug trafficking are all punishable by death.