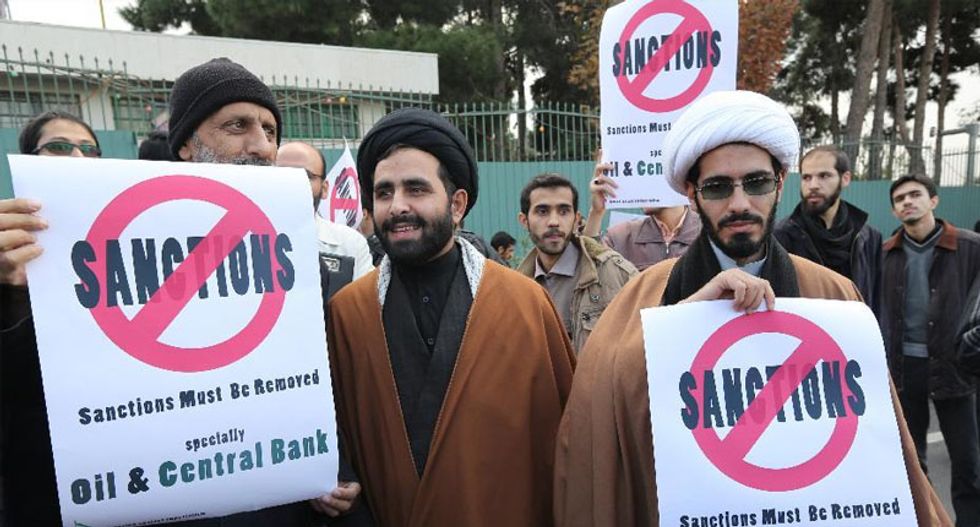 Iranian men hold placards during a demonstration outside the Tehran Research Reactor in Tehran on November 23, 2014, to show their support to Iran's nuclear program (AFP Photo/Atta Kenare)

Supporters of Iran sanctions in the US Senate have unveiled a toned-down bill aimed at gaining enough votes to override a presidential veto.

President Barack Obama has argued forcefully against any new measures against the Islamic Republic, saying Iran was already chafing under existing sanctions and imposing new ones could torpedo ongoing talks on an agreement to prevent Tehran from developing a nuclear bomb, a goal it denies having.

On Thursday, the Senate banking committee will discuss and vote on the re-jigged bill proposed by Republican Mark Kirk and Democrat Robert Menedez, two senators who have sponsored previous sanctions bills.

Their long-awaited bill was made public Friday but has not been formally introduced in the Senate.

It would gradually impose sanctions against Iran if, by July 1, no final deal is reached in the talks under way between Tehran and the so-called P5+1 group -- the United States, Britain, China, France, Germany and Russia.

July 1 is the current deadline for the international negotiations, at a stalemate after two previous deadlines passed without a final agreement.

The calendar proposed by Kirk and Menendez would kick in a few days later, and escalate over several months.

If there were no deal by July 6, sanctions that had been frozen as part of an interim agreement would be reinstated. They would be followed on August 3 by new sanctions on the petroleum industry, and on September 7 by new restrictions on countries that currently import Iranian oil.

On October 5, more Iranian officials would be targeted by travel and financial sanctions, and on November 2, new sanctions would kick in against foreign financial institutions engaged in transactions with Iran's Central Bank or other sanctioned banks.

Finally, on December 7, if there were still no deal, Iran's automobile, construction, engineering, and mining sectors would be targeted.

"The guillotine cuts into the wallet," but not in one fell swoop, a senior congressional staffer told AFP. "It cuts through over the next six months."

If a final agreement with Iran were reached, the president must inform Congress, at which point the sanctions could be waived after Congress has been in session for 30 continuous days -- that would likely be in September or October at the earliest, given the summer recess.

But even if there is no comprehensive deal, Obama, every 30 days, could block the new sanctions from taking effect in the name of national security and on the condition that he certifies Iran is respecting the temporary agreement and not re-starting forbidden nuclear activities.

In December 2013, the two lawmakers had proposed a much more stringent law, which set specific and very strict criteria for any final agreement with Iran -- including that Tehran completely dismantle illicit aspects of their nuclear program and stop its support for terrorism.

The new proposal would make these conditions non-binding, which leaves Obama with more flexibility.

But the US president has urged Congress "to show patience" and not impose any new sanctions, threatening to veto any such legislation that reaches his desk.