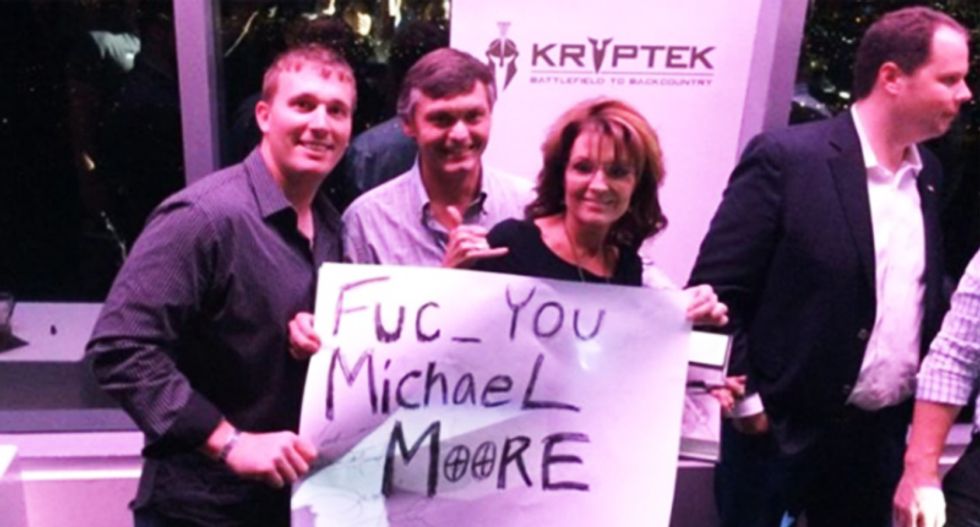 In a development that shocked the literary world,  Bristol Palin -- teen mom, GED-American, and future assistant nail salon receptionist -  used the word "succinct" on her blog properly, landing all three c's and not fancying it up into something more Palin-esque like 'succinctably' or 'succinctiacationally,' as is the custom of her northern tribe.

Writing on Bristol Palin: life. family. alaska. ("A blog about  faith and being a mom") Bristol poured one out for the late Chris Kyle while sharing  a picture of her mom (Sarah Palin - for those who don't watch cable TV) holding up a "fuc_" sign.

Sarah has declared Juneau Jihad of Michael Moore for dissing her homey Chris Kyle and has decided one of the best ways to launch her 2016 campaign for more money from the rubes  is by holding up a sign reading: "Fuc_ You MichaeL Moore," while sandwiched between a couple of strapping young white bucks at GunBarrelStrokeStock in the heartland of America: Las Vegas.

Normally when not trying to swear politely using the F-bomb, most people bleep out the 'u,' but apparently there was some forethought given to the fact that Tea Partiers might not get it ... so they bought a vowel.

As a nifty touch, the two o's in Moore's name have gun sight cross-hairs drawn in, although it is entirely possible they could represent surveyors marks, white power symbols, or the cross on which Our Lord and Savior Jesus Christ died for our sins.

To be safe, lets say they represent all of them, Katie.

Additionally Palin is flashing the 'shaka' gang sign ('shaka' not 'shocker,' although it is entirely possible she may have mistaken the two) paying tribute to two of the colleges in Hawaii that she attended, making the other five or six colleges she also attended sad.

Or, happy if their accreditation review is coming up.

While in Vegas, Bristol Palin also hopes to replace her fuc_ing shoes and $300 sunglasses she lost the Great Snowbilly Brawl of 2014.