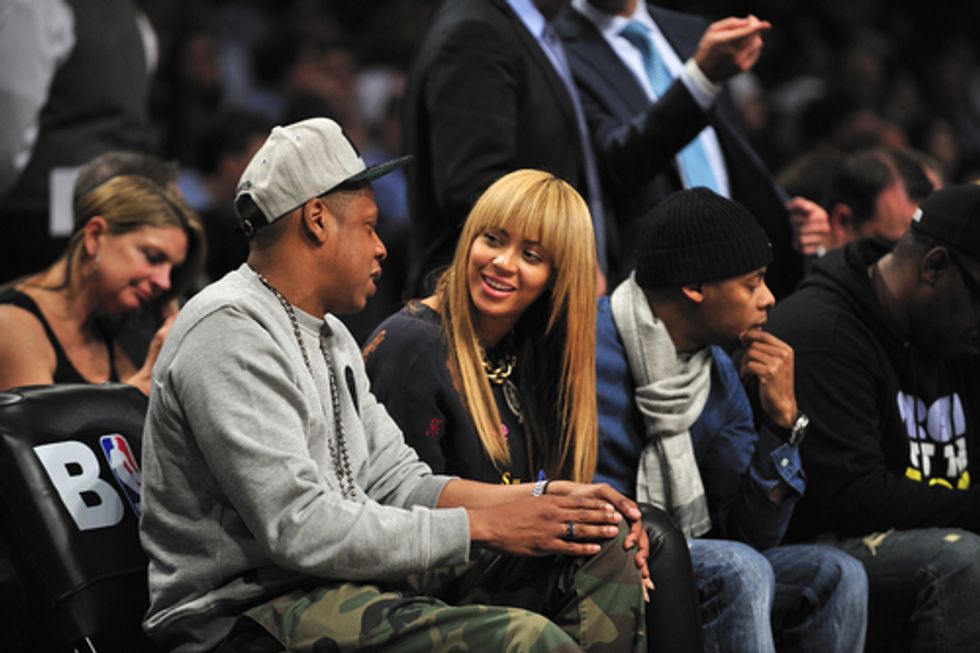 Jay-Z likes hanging out with his wife, which is unimaginable to the Mike Huckabees of the world.

I guess Mike Huckabee wants to buy another vacation home or something, because he's dusting off the conservative hustler's favorite money-making tactic: Pretending to run for president. I mean, I don't know if he's said that yet, but he has a new book out, which is about as good as an announcement for a fake presidential run/money-making opportunity gets. And in this money-grub, Huckabee shares his ideas about the Beyoncé/Jay-Z marriage:

Beyonce is incredibly talented – gifted, in fact. She has an exceptional set of pipes and can actually sing,” Huckabee writes. “She is a terrific dancer – without the explicit moves best left for the privacy of her bedroom. Jay-Z is a very shrewd businessman, but I wonder: Does it occur to him that he is arguably crossing the line from husband to pimp by exploiting his wife as a sex object?

Oh, there is so much there: The misogyny, the racism, the sex-phobia. The inability to imagine that a woman makes her own choices. The unquestioned assumption that women are owned by their husbands. The inability to see a black businessman as anything but a "pimp". The prudish unwillingness to admit that sexual expression has a place in art. And inability to imagine that it's possible that a man actually likes his wife and wants to have fun with her instead of treating her like a cum sock. In one quote, Huckabee managed be convey roughly 95% of what is wrong with conservatism. Naturally, he's doubling down on this, in an interview with People.

In an interview about his new book, God, Guns, Grits and Gravy, Huckabee tells PEOPLE he doesn't get how the Obamas can encourage their daughters' love for Beyoncé. Especially, the former Arkansas governor and Baptist minister says, if the president and first lady ever actually listened to the lyrics to – or seen a performance of Beyonc´'s steamy "Drunk in Love." The Obamas "are excellent and exemplary parents in many ways," Huckabee says. "That's the whole point. I don't understand how on one hand they can be such doting parents and so careful about the intake of everything – how much broccoli they eat and where they go to school and making sure they're kind of sheltered and shielded from so many things – and yet they don't see anything that might not be suitable for either a preteen or a teen in some of the lyrical content and choreography of Beyoncé, who has sort of a regular key to the door" of the White House.

Yeah, why are the Obamas encouraging their daughters to look up to a woman who models how a woman can be tough, creative, and independent while also having a loving marriage with someone who enjoys having fun with you? Especially when "good" parents teach their daughters that sex is dirty and that marriage is supposed to be sad and dutiful instead of joyful and loving? Get it together, Obamas! Next you're going to tell me they don't make their daughters beg their father's forgiveness for having the temerity to be born female. The way they raise girls these days, I tell you what.

Of course, as Kelly Faircloth of Jezebel points out, in the same interview Mike Huckabee is singing the praises of the Duggar family.

As for any 2016 bid for the White House, Huckabee says he'll decide sometime this spring and, if it's a yes, he wants some of the only reality TV stars he can stomach – the Duggars of TLC's 19 Kids & Counting beside him. "I've pointed them out as an example of something that's wholesome and wonderful and I've known them since Jim Bob was in the legislature when I was governor," says Huckabee. The Duggars campaigned for Huckabee in 2008. "Should I run, I'm hoping they'll do it again. And now there's more of 'em!"

Oh fuck me. If you want to talk about someone who objectifies his wife, it sure as shit isn't Jay-Z, who treats his wife as a professional and a colleague and his equal. It's Jim Bob Dugger, who treats his wife like an object put on earth to make babies for him. That is what "objectification" means: Reducing someone to an object and denying them agency or having value outside of how you can use them. I realize people use it to mean "thinks someone is sexy", but those people are wrong. Sex is a good thing and thinking your spouse is sexy is key to a healthy marriage.

No, objectification is about reducing someone to an object. And thus, few celebrities are more objectified than Michelle Duggar, who belongs to a religious cult that teaches that women should have no agency whatsoever when it comes to how their body is used, because they are objects to be owned and controlled by their husbands. They are not allowed to decide when to have sex or when to have children. Only the man who currently controls them is allowed to make that decision. Their father owns them until marriage, denying them the autonomy to decide to have sex if they want. After marriage, their husbands own them, and the decision of when to have sex is solely the husband's. They don't hide this, openly explaining that a woman is obliged to have sex whenever the husband wants it, regardless of how she feels, because---being an object---her feelings don't matter. Since they are not allowed to use birth control, this also means they get pregnant not when they want to, but strictly according to what the husband wants. Their bodies do not belong to them. They are objects to be used by men. Sort of sex-and-breeding appliances, if you will.

That's what objectification looks like. Does anyone honestly think Beyoncé is denied autonomy in her marriage? Obviously, there's different levels of objectification, and there are plenty of marriages where men control their wives without it going so far as to deny them any birth control or right to control when they have sex. But let's be honest: Odds are that Beyoncé is not in one of those marriages. She's independently wealthy and married to a man who is clearly not threatened by her success, whereas you get the feeling that Jim Bob Duggar melts down if his wife takes a 15 second break from staring at him with dog-like adoration.

Someone should straight up ask Huckabee if Michelle Duggar is a better role model for girls than Beyoncé. I'd love to hear him explain directly that we should be teaching girls to be submissive breeding machines instead of independent women who marry men who actually like and respect them. That would be interesting.