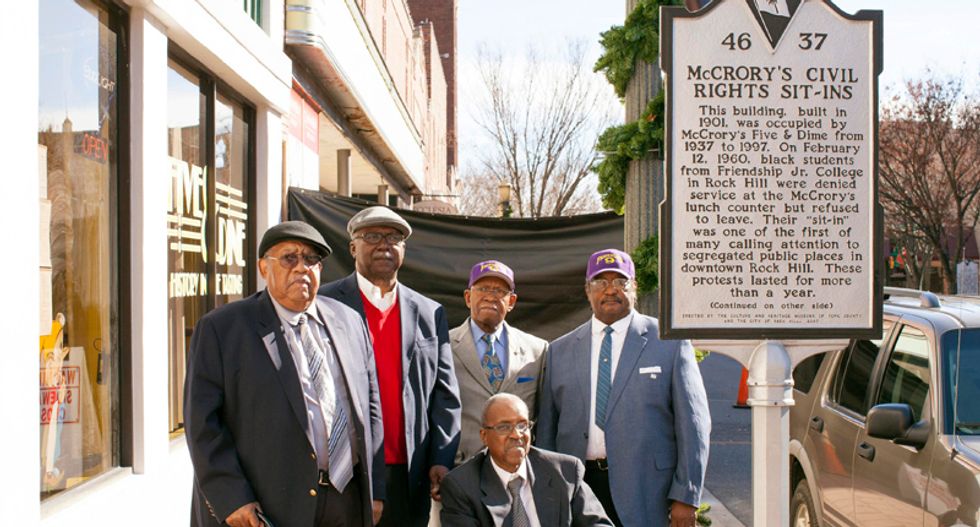 ROCK HILL, S.C. (Reuters) - Fifty-four years after nine young black men became the first U.S. civil rights protesters to serve jail time for sitting at an all-white lunch counter, surviving members of the group will return to a South Carolina courtroom this month to be exonerated of their crimes.

Their "jail, no bail" strategy helped galvanize the fight against racial inequality in the South and became a model for other protesters. But the "Friendship Nine," as the men became known, endured personal hardships for taking the bold stand.

They say the push to clear their names so long after the Jan. 31, 1961, sit-in in Rock Hill will have little effect on their lives. Still, they welcome the message it sends at a time of sharpened focus on U.S. race relations following white police killings of unarmed black men in Missouri and New York.

"For the generations that are here now and for the future, it shows that the country was wrong," said one of the men, Willie McCleod, 72.

The convictions are among a number of decades-old cases that have been revisited across the South in recent years as courts acknowledge racial injustice in the criminal justice system.

Author Kimberly Johnson, who published a children's book about the Friendship Nine last year, began to seek vindication for the men after reading what Martin Luther King Jr. wrote in 1963 while he was jailed for demonstrating against discrimination of African Americans.

In his "Letter from Birmingham Jail," King argued he had a moral duty to stand up to unjust laws. "Injustice anywhere is a threat to justice everywhere," he wrote.

The U.S. holiday honoring King, who was assassinated in 1968, is on Monday.

Johnson said she was struck by the similarity of the nonviolent approaches by King and those of the Friendship Nine, most of whom were attending Friendship College when they agreed to risk arrest at the McCrory's five-and-dime store's lunch counter.

At the time, the sit-in movement that had begun in 1960 at a Woolworth's segregated lunch counter in Greensboro, North Carolina, was losing steam. Organizers thought they could draw more attention if protesters went to jail instead of continuing to pay fines.

Clarence Graham, 72, agreed to participate and remembers being dragged out of McCrory's by police. Just 17, he knew that some people who went to jail during that turbulent era were not seen again.

The group served 30-day sentences doing hard labor at the county prison farm. They carried the stigma of a criminal record much longer, they said, and for years did not talk about the experience, even with their own families.

"I had fears about someone exposing me, saying: 'Do you know what he did?'" said Willie Thomas "Dub" Massey, 72, who went on to serve in the Army and later became an educator and minister.

A few years after the sit-in, actions like the Friendship Nine's were no longer a crime. The federal Civil Rights Act of 1964 requires that all races have equal access to restaurants and other public places.

Solicitor Kevin Brackett, who since 2006 has overseen prosecutions in the judicial circuit that includes Rock Hill, said past suggestions to expunge the men's records or pursue pardons seemed inappropriate because those strategies would erase an important part of history or imply the men were seeking forgiveness.

Prodded by Kimberly Johnson to take another look, Brackett settled upon a different tactic. On Jan. 28, he will argue that the men's convictions for trespassing should be thrown out because their skin color was the sole reason for their arrests.

Most of the eight surviving members of the Friendship Nine plan to attend the hearing, which will be held in a courtroom about 500 yards from where the sit-in occurred. Their records will still reflect their arrests but will show they were not guilty of a crime, Brackett said.

"What these gentlemen did was take a courageous stand against an obnoxious and vile policy," Brackett said. "It’s important that we publicly and legally recognize the wrongfulness of those convictions."