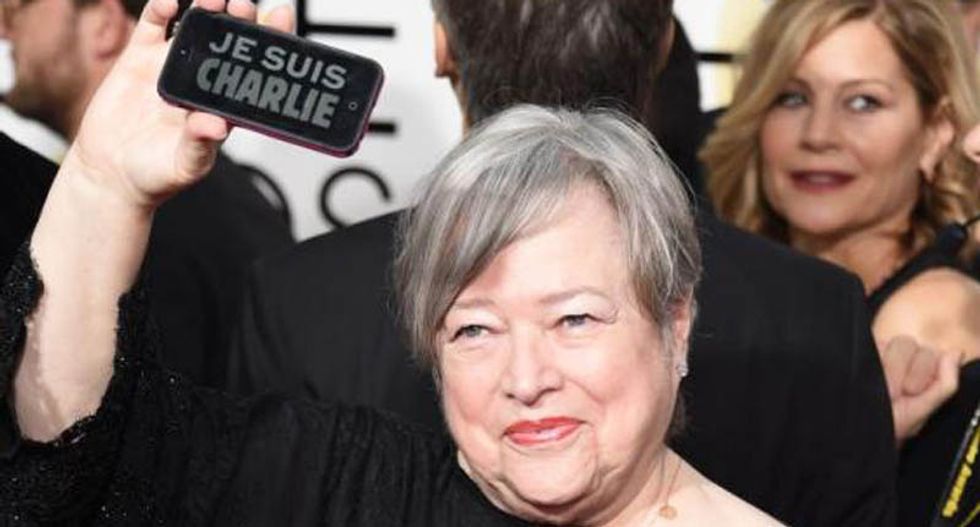 AFP/AFP - Actress Kathy Bates shows "Je suis Charlie" on her phone as she arrives on the red carpet for the 72nd Annual Golden Globe Awards on January 11, 2015 at the Beverly Hilton Hotel in Beverly Hills, California

George and Amal Clooney, Helen Mirren, Kathy Bates and Diane Kruger were among those who brandished signs or wore pins reading "Je Suis Charlie" -- the rallying slogan in the wake of the deadly gun attack on French satirical weekly Charlie Hebdo.

Amal Clooney, elegant in a black Dior couture gown with a "Je suis Charlie" pin on her clutch bag, said she had chosen something from the fashion house "in solidarity with the French" people.

On the red carpet at the Beverly Hilton hotel, covered by a canopy to protect the stars as rain pelted Tinseltown, there were room for both activism and glamour.

"Gone Girl" star Rosamund Pike -- one of several British stars on the nominees list -- was one of the first to arrive, sporting a sleeveless cleavage-baring ivory Vera Wang gown with waist cut-outs.

Pike, who had a baby just over a month ago, admitted she would be "astonished" if she were to win the prize for best actress in a dramatic film, against Reese Witherspoon, Felicity Jones, Jennifer Aniston and Julianne Moore.

Moore, a double Globes threat in the best actress drama category for "Still Alice" and the musical/comedy category for "Maps to the Stars", glittered in a shimmering silver Givenchy gown, which trailed to the floor in a cloud of black feathers.

Britain's Emily Blunt -- up for a Globe for best actress in a musical/comedy for "Into the Woods" -- admitted her halter white Michael Kors dress with an intricate criss-cross bodice was "a bit soggy at the bottom."

Amy Adams, the "Big Eyes" star who is competing against Blunt, rocked the old-school Hollywood look in a demure one-shoulder Versace gown with a train, her red hair in flowing waves.

Also in Versace but far less demure was Jessica Chastain, nominated for her work in gritty 1980s thriller "A Most Violent Year." Her bronze Versace gown with a plunging neckline left little to the imagination.

For fashion and jewelry designers, having an A-list star show up on the Oscars red carpet in one of their creations is essentially free advertising -- thanks to the global coverage of the ceremony.

Hollywood's men did not disappoint, with Eddie Redmayne in a blue velvet tuxedo and "Birdman" star Michael Keaton rocking a more classic look.

Beyond the actors, the Globes carpet featured its share of musicians, with Lorde, John Legend and Lana del Rey all in the running.

Lorde -- the New Zealand singer who worked on the soundtrack for "The Hunger Games: Mockingjay - Part 1" -- wore a slinky Narciso Rodriguez suit with a midriff-baring top and a huge diamond collar necklace.

With Hurricane Ian bearing down on Florida, it's completely understandable why the House committee investigating the January 6 insurrection postponed Wednesday's scheduled hearing. No new date has been scheduled, though it will be coming soon and is likely to be another doozy of a hearing. As Heather "Digby" Parton, notes, the word is that the committee will focus heavily on the role of long-time Donald Trump confidante Roger Stone, and the role he played in planning and executing the Capitol riot.

But even without the January 6 hearing to provoke Trump's ravings on social media, Trump has a lot of legal problems to sweat this week. That's because jury selection began for the trial of Oath Keepers head Stewart Rhodes and four other members of his far-right militia. The Oath Keepers, as with the Proud Boys, are both heavily linked to Stone and both were central to the Capitol insurrection.