Superheroes vs. bigotry can be a powerful thing 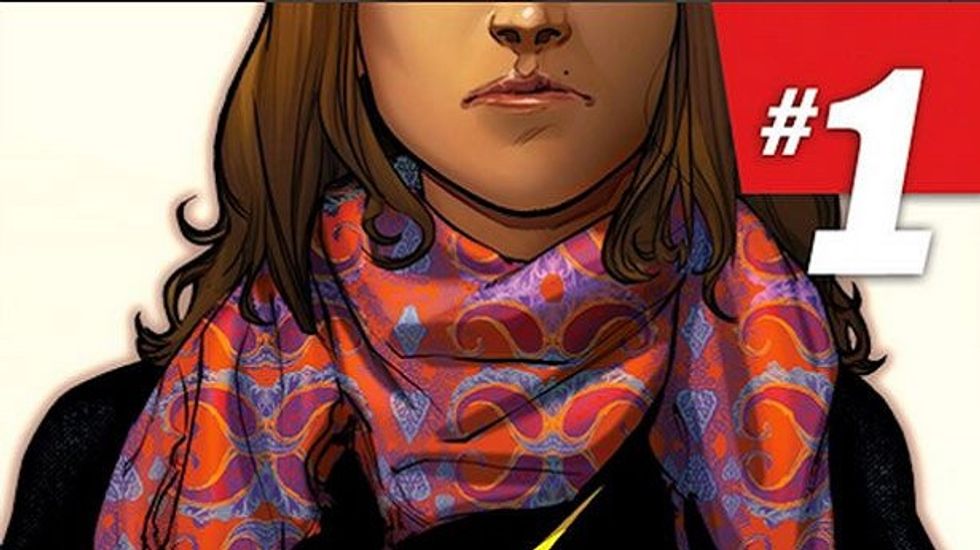 Taking a break from the usual doom and gloom that comes with the territory of political writing to highlight a heart-warming tale out of the San Francisco that has been reported on by io9. (Graphic Policy had some early coverage, as well.)  A group called the Freedom Defense Initiative, which has been classified as a hate group in the UK, has been blanketing the big cities in the country with ads that characterize Muslims as savages and equating Muslims with Nazis and demanding that the U.S. adopt a formal policy of religious discrimination by refusing to send aid to majority-Muslim countries. As regular readers know, I'm no fan of religion, but this is all just a simple cover for racism, and that's all there is to it. Just as with all other religions, the majority of Muslims are peaceful and these ads are an attempt to stoke needless hate and conflict. If anyone is being like the Nazis here, it's the people who are sponsoring these ads, which are about singling out members of a religious minority for hate and oppression and making false accusations that these people are a subversive element out to destroy your society. Which is, last I checked, exactly the strategy that the Nazis used to justify their treatment of Jewish people.

Anyway, the heart-warming part: Someone in San Francisco has been defacing these hateful ads with pictures of Kamala Khan, a new Marvel character that has been selling comic books like hotcakes. Kamala is a teenage Pakistani-American who is also a shapeshifter (great choice of a superpower to represent the struggles of the American child of immigrants, by the way), and she has taken over the mantle of Ms. Marvel now that Carol Danvers has become Captain Marvel. The character is a great face to put on an anti-Islamophobia campaign because she was written very specifically to be a kind of every-kid American Muslim, whose life has nothing to do with the hysterical portrayals of subversive Muslim evil being promulgated by hate groups like Freedom Defense Initiative. Here's some photos:

Frankly, I'm a little unclear on why so many cities are allowing these ads to be run. Freedom Defense Initiative has free speech rights, but it's not a violation of free speech to say that taxpayer-funded spaces should not be used to spread vicious lies about members of our community.

The writer of Ms. Marvel has endorsed the campaign:

I realize that there is likely some skepticism about fighting racism with superheroes, because superheroes are about fun and fantasy, which some people see as silly. But this campaign has a promising precedent, as history shows that Superman was critical in turning back the power of the KKK, as Mark Juddery explained in Mental Floss.

In the post-World War II era, the Klan experienced a huge resurgence. Its membership was skyrocketing, and its political influence was increasing, so Kennedy went undercover to infiltrate the group. By regularly attending meetings, he became privy to the organization's secrets. But when he took the information to local authorities, they had little interest in using it. The Klan had become so powerful and intimidating that police were hesitant to build a case against them.

Struggling to make use of his findings, Kennedy approached the writers of the Superman radio serial. It was perfect timing. With the war over and the Nazis no longer a threat, the producers were looking for a new villain for Superman to fight. The KKK was a great fit for the role.

As the storyline progressed, the shows exposed many of the KKK's most guarded secrets. By revealing everything from code words to rituals, the program completely stripped the Klan of its mystique. Within two weeks of the broadcast, KKK recruitment was down to zero. And by 1948, people were showing up to Klan rallies just to mock them.

You can listen to the serial online! But here's a summary in case your tolerance for the antics of 1940s radio is as low as mine. It's a perceptive story, though, hitting on how hate groups appeal to people who feel like life's losers and even has a subplot about how reactionaries target journalists for harassment. Hilariously, the real-life KKK, angry about "ethics in journalism" or "fair and balanced" or whatever term reactionaries used in the day to try to intimidate journalists away from reporting on social justice issues, tried to call for a boycott of Superman's advertisers. Luckily, it didn't work.