Sweet talk at US Republican retreat, but divisions persist 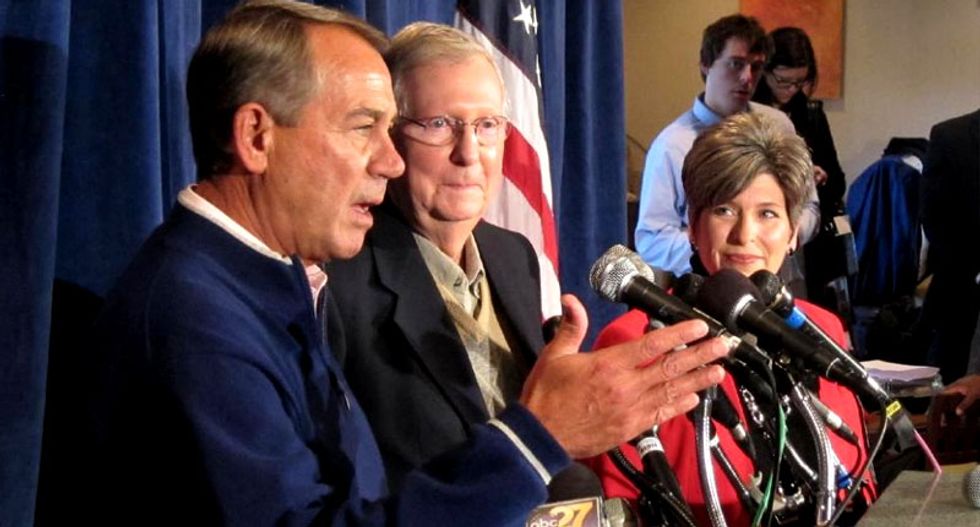 US House and Senate Republicans huddled Thursday in the famed chocolate town of Hershey, hoping some of the destination's sweetness rubs off as they struggle to smooth out divisions on vexing issues like immigration.

The GOP is in control of both chambers of Congress for the first time in eight years, and while they are largely united in opposing President Barack Obama's legislative agenda, Republican leaders are struggling to rein in recalcitrant conservatives in their party.

It was a "robust, frank discussion of the issues," Senator John Thune said.

But the reputation of this ageing resort town -- Hershey's motto is "The sweetest place on Earth" -- belied the occasionally edgy atmosphere in which the House and Senate Republican caucuses were meeting outside Washington for the first time in 10 years.

Topping the list of issues is immigration, in which fissures widened after the House passed a Department of Homeland Security funding bill Wednesday that not only would wipe out Obama's unilateral actions on immigration, but also roll back existing previsions that shield thousands of young undocumented immigrants from deportation.

"Yesterday was a clear overreach," said Congressman Jeff Denham, one of 26 Republicans who voted against that amendment.

He said there was Republican unanimity in wanted to prevent Obama's executive action on immigration, which would provide millions of illegal immigrants with temporary work permits.

"But going far beyond that I think not only sets us back on immigration reform, but I think it sends a mixed message to the American public -- and one that we're going to have to straighten out," Denham added.

The Senate is expected to take up the House DHS/immigration measure -- or its own version -- in the coming weeks, ahead of a February 28 deadline to renew DHS funding.

"I anticipate we'll act well in advance of that," number two Senate Republican John Cornyn told reporters, but "what the Senate will do, I don't know."

The DHS bill in its current form lacks sufficient votes in the Senate to overcome Democrats' blocking tactics.

Denham spoke to some Senate Republicans ahead of an afternoon session on immigration, and said they have "concern."

Several high-profile guests were brought to the retreat, including TV comedian Jay Leno, Aspen Institute president Walter Isaacson and former British prime minister Tony Blair, who according to lawmakers present called on the US and government worldwide to confront Islamist extremism "head on."

"We'll find some way to resolve the differences," Boehner said of the immigration impasse.

"To try to get all of us to agree is not an easy job."

"The president doesn't set the agenda in the Senate, but we're anxious to make progress... on things where we can find areas of agreement," McConnell said.