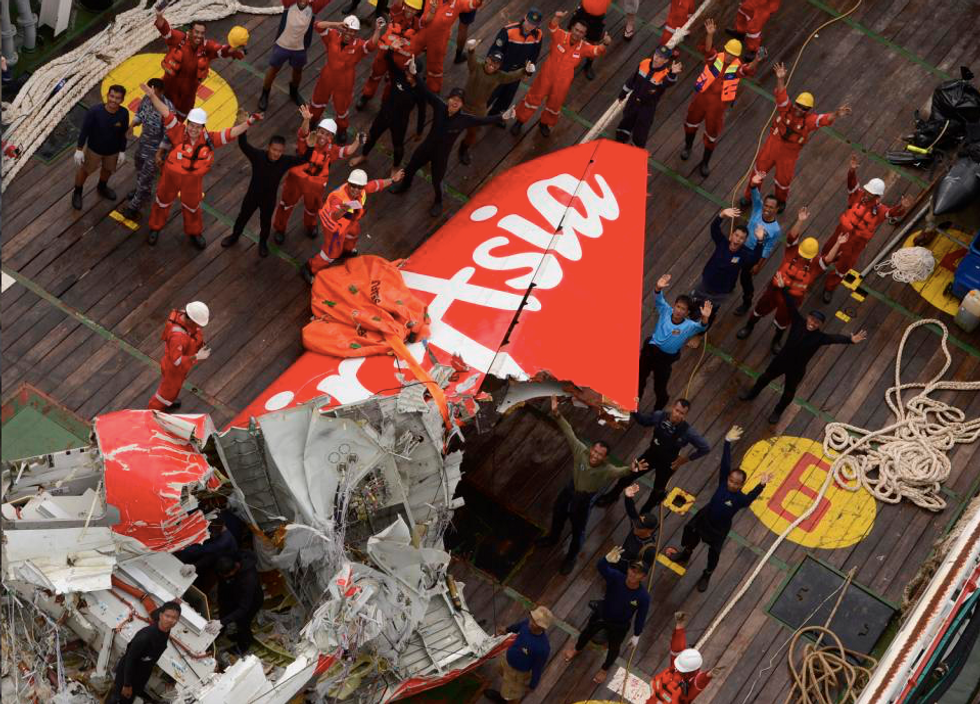 The mangled tail of an AirAsia plane that crashed with 162 people on board was lifted out of the Java Sea Saturday, but without the crucial flight recorders, Indonesian authorities said.

The Airbus jet went missing in stormy weather on December 28 as it flew from the Indonesian city of Surabaya to Singapore, killing all aboard.

The wreckage of the tail, which contained the black box data recorders that are essential to explaining the disaster, was found in the seabed 10 days after the crash.

The 10-metre-long (33-feet) stretch of mostly mangled metal was finally lifted on to a tugboat vessel on Saturday using giant balloons and a crane, but there was no sign of the black boxes.

"It's definite that the black boxes aren't there," S.B Supriyadi, a director with the National Search and Rescue Agency, told reporters after the tail had been inspected.

The black boxes are seen as important because they should contain the pilots' final words as well as various flight data.

However Supriyadi said the boxes were still emanating ping signals and were believed to be buried in the seabed close to where the tail was found, about 30 metres under the surface.

Supriyadi said divers, from an elite Marines unit, would continue scouring the sea for the black boxes.

"The challenge is that these sounds are very faint. If a ship passes by, the sounds will be drowned out. So we really need calm waters," he said.

To aid the tracking of the signals, Supriyadi said the engines of the warships involved in the search operation would be turned off on Sunday.

Search efforts also involving foreign naval ships continued throughout Saturday for other parts of the plane's wreckage, as well as for the bodies of the passengers and crew.

Just 48 bodies have been found so far, according to Indonesian authorities.

There was no success on Saturday in finding the cabin part of the plane where most of the passengers were.

"We strongly intend to find other parts of the plane as we are confident that the victims' (bodies) are still trapped in there," Indonesian military chief Moeldoko told reporters.

All but seven of those on board were Indonesian.

The non-Indonesians were three South Koreans, one Singaporean, one Malaysian, one Briton and a Frenchman -- co-pilot Remi Plesel.

The Indonesian meteorological agency has said weather was the "triggering factor" for the crash, with ice likely damaging the engines of the Airbus A320-200.

Before take-off, the plane's pilot, Captain Iriyanto, had asked for permission to fly at a higher altitude to avoid a major storm. But the request was not approved due to other planes above him on the popular route, according to AirNav, Indonesia's air traffic control.

In his last communication, the experienced former air force pilot said he wanted to change course to avoid the storm. Then all contact was lost, about 40 minutes after take-off.

A subsequent ministry audit found five other airlines, including national carrier Garuda, were flying dozens of routes without permits.

The ministry on Friday suspended 61 routes until those airlines secured the correct permits.

Indonesia AirAsia was banned shortly after the accident from flying the Surabaya-Singapore route.

However no connection over the permit issue has been made with the crash.