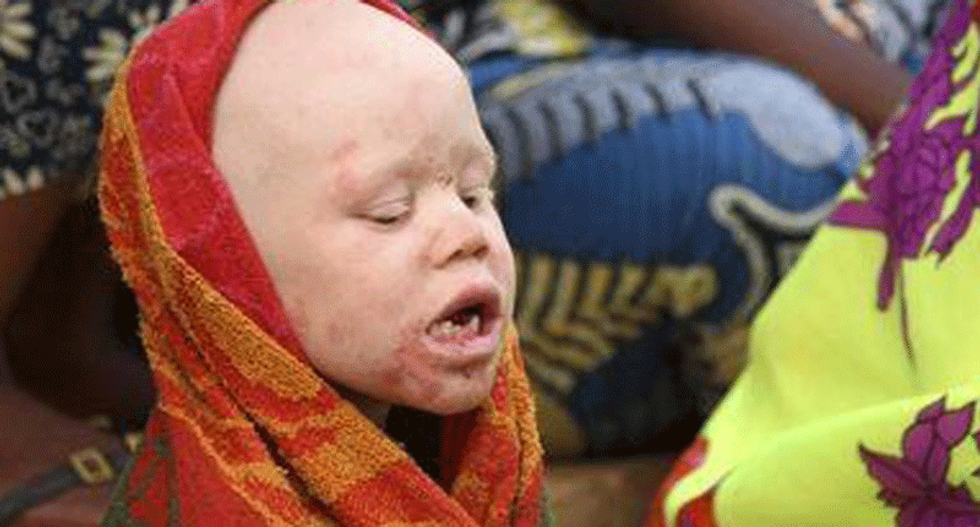 An albino child sits outside the courtroom in Ruyigi, eastern Burundi, May 28, 2009. (REUTERS/Jean Pierre Aime Harerimana)

Tanzania has banned witchdoctors to try and stem a surge in murders of albinos, whose body parts are sold for witchcraft, officials said Wednesday.

The ban follows the kidnapping last month of a four-year-old girl by men armed with machetes, who took her from her home in the northern Mwanza region. Police have since arrested 15 people, including the girl's father and two uncles, but she is still missing.

At least 74 albinos have been murdered in the east African country since 2000, according to United Nations experts.

After a spike in killings in 2009, the government placed youngsters in children's homes in a desperate effort to defend them.

As well as the ban, the government has launched an education campaign to end the killing of albinos.

"We are keen on addressing the issue of abductions and killings of people with albinism once and for all," home affairs minister Mathias Chikawe said.

The ban however does not cover traditional healers who use herbs to help the sick.

Chikawe said the government and the Tanzania Albino Society (TAS) agreed on Tuesday to form a task force for conducting special operations against the kidnap, abduction and murder of albinos.

"We are against those who cheat people that they will be rich by possessing charms, as well as fortune tellers and those distributing talismans," Chikawe said.

"People should also be repeatedly told that the only way of becoming rich is through hard work and not possessing charms."

A hereditary genetic condition which causes an absence of pigmentation in the skin, hair and eyes, albinism affects one Tanzanian in 1,400, experts say. In the West, it affects just one person in 20,000.

In August, a UN rights expert warned that attacks against albinos were on the rise because Tanzania's October 2015 presidential election was on the horizon, encouraging political campaigners to turn to influential sorcerers for support.

Albino body parts sell for around $600 in Tanzania, with an entire corpse fetching $75,000, a fortune in the impoverished country.

The Malian singer Salif Keïta, himself an albino, has led an international campaign against the trade and to change traditional attitudes towards people with albinism.