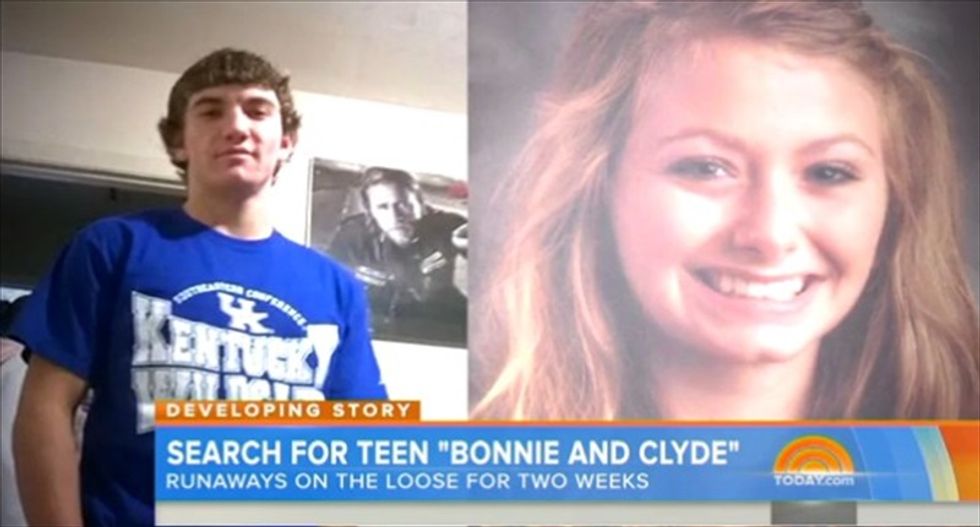 Teenage sweethearts from Kentucky suspected of carrying out a multi-state crime spree over the past two weeks after running away from home were captured in Florida on Sunday, Kentucky authorities said.

Dalton Hayes, 18, and Cheyenne Phillips, 13, were found by the U.S. Marshals Service and local law enforcement early Sunday in Panama City, Florida, sleeping in a stolen pickup truck. They were taken into custody without incident, the Grayson County Sheriff's Office said in a statement.

Hayes and Phillips are suspected of stealing three vehicles, two with firearms inside, using phony checks and destroying property since they disappeared around Jan. 3 from Grayson County in western Kentucky, authorities said.

Authorities have begun the process to extradite Hayes and Phillips back to Kentucky, where they could face multiple felony charges, the sheriff's office said.

Hayes and Phillips are not suspected of any violent crimes and no one was injured during the two-week hunt for the pair, the sheriff's office said.

The teens are suspected of stealing a car around Jan. 11 in Kentucky and driving it across a cattle farm, causing thousands of dollars in property damage, the sheriff's office said.

They are suspected of taking a red Toyota truck, which had a firearm inside, and fleeing about 600 miles to South Carolina. Surveillance video captured them at a Walmart store, where local police believe they used stolen checks, authorities said.

The red truck was found abandoned Wednesday in Henry County, Georgia, outside of Atlanta, and a silver 2001 Toyota Tundra pickup truck was reported stolen with two firearms inside within walking distance of that truck, local police said.

(Reporting by David Bailey in Minneapolis; Editing by Rosalind Russell)