The 'Diplomatic Conception': Cuban 5 prisoner and wife have a baby without conjugal visits 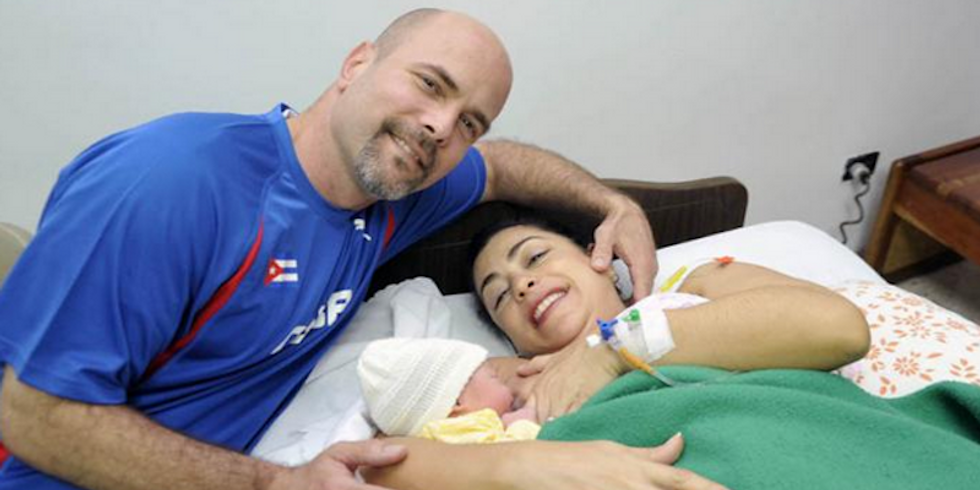 It's not quite as unbelievable as the Immaculate Conception, but it's pretty unthinkable, given the history of diplomatic "relations" between the U.S. and Cuba.

Tuesday, the wife of one of the Cuban Five gave birth to a baby girl, Gema Hernández Pérez. Gerardo Hernández was one of the three former Cuban intelligence agents, freed, after being in jail for 16 years, during a prisoner swap between Cuba and the U.S. last month, which also resulted in the release of the U.S. business man Alan Gross. But, obviously, Hernández was still in prison when his wife Adriana Pérez was impregnated. So, how did it happen? Conjugal visits, you say? Nope. Those weren't allowed. The milk man, you say? Nope. The baby is of Hernández genetic stock.

As Hernández explained, "I had to do it by ‘remote control’." OK. So, what does that mean?

Well, it turns out, in a process funded by the Cuban government, authorized by the U.S., and facilitated by Tim Rieser, an aid of Sen. Patrick Leahy (D-VT), Hernandez was allowed to send his frozen sperm to his wife in Panama, where she was artificially inseminated.

A spokesman for the US Department of Justice, Patrick Rodenbush, said, "We can confirm the United States facilitated Mrs Hernández’s request to have a baby with her husband. The request was passed along by Senator Leahy, who was seeking to improve the conditions for Mr Gross while he was imprisoned in Cuba."

Senator Leahy was pretty happy about the pregnancy:

We never said, "OK, we’ll do this, if you do that." We just did it as a human thing. I think it impressed the Cubans. When Tim Rieser went back down later, asked to improve the conditions of Alan Gross’s prison cell, where he’s staying, they made dramatic improvements. Didn’t release him, but made dramatic improvements. And then we got a letter from her, saying that she was pregnant, and thanking us so very much. And, I mean, I feel like the godfather or something in this. I’ve never met her husband, but I’ve seen the pictures since they reunited, the joy on his face, especially the joy on hers, and they’re going to have a little girl.

Happiest of all, of course, are Hernández and Pérez, especially since they thought Hernández, who received two life sentences, was expected to die in jail. Not only were they able to have a child, but Hernández was able to be there for the birth. According to the Cuban newspaper Granma, Hernandez said he was  “very happy, super excited … I never imagined such a happiness.”

Now, lest you fear that a dangerous terrorist has been able to return to Cuba where he will raise his spawn to grow and try to kill Americans, you should know that Hernández and the other four of the Cuban Five were "spying" on anti-Cuban terrorist organizations in the United States, which had killed. Their conviction was overturned, before being reinstated, and their freedom was championed by several human rights and legal organizations as well as eight Nobel laureates including Desmond Tutu, Wole Soyinka and Jose Saramago.