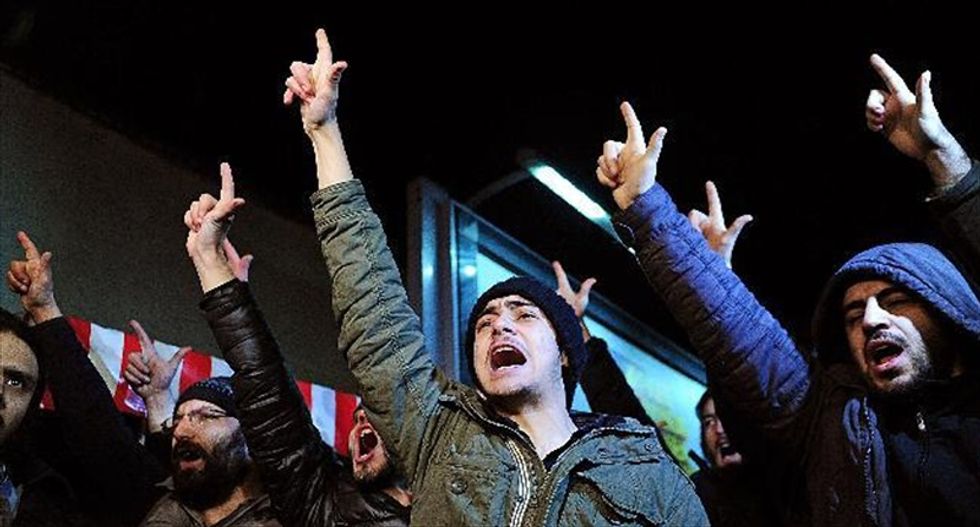 Muslim protestors shout slogans during a protest against Turkish daily newspaper Cumhuriyet on Jan. 14, 2015 in Istanbul. Photo by Ozan Kose for Agence France-Presse.

A Turkish court on Wednesday ordered a block on websites featuring the controversial front cover of the first issue of French satirical weekly Charlie Hebdo since the massacre at its offices, as anger grew in the Islamic world over the edition.

The court in the southeastern Turkish city of Diyarbakir, responding to a petition brought by a single lawyer, ordered the block on websites displaying the cover which shows the Muslim Prophet Mohammed, the state Anatolia news agency reported.

In the front-page cartoon the prophet sheds a tear and holds a sign with the viral slogan "Je suis Charlie" ("I am Charlie"), after the killing of 12 people last week in an attack by Islamist gunmen on Charlie Hebdo's offices.

But it stopped short of publishing the controversial cover in the four page pull-out issue, with the image appearing in smaller form to illustrate two columns by commentators.

Cairo's Al-Azhar university, Sunni Islam's most prestigious centre of learning, had warned that new Mohammed cartoons will only serve to "stir up hatred" while there was also an angry reaction from Iran and Islamic State (IS) jihadists.

The government in mainly Muslim Senegal also banned distribution of the editions of Charlie Hebdo and the French daily Liberation, which also put the cartoon of the Prophet Mohammed on its front page.

Few Turkish websites published the cover but among those who did was the opposition website T24.tr. Access to the picture was still unfiltered Wednesday evening despite the court ruling.

"Words, writing, cartoons and publications denigrating religious values and the prophet is regarded an insult to the followers of that faith," the court ruling said.

Cumhuriyet editor-in-chief Utku Cakirozer described the printing of the four-page pull-out as a display of solidarity with Charlie Hebdo, recalling that several reporters from his paper had been murdered in the past.

"We took care to show the maximum respect for religious sensibility and freedom of belief in our society, not just among Muslims, but Christians, Jews, and those who don't believe," he told a news conference in Istanbul.

The publication triggered a Turkish Twitter hashtag #UlkemdeCharlieHebdoDagitilamaz (Charlie Hebdo may not be distributed in my country).

The paper said police had conducted a check on the print run of the paper at the press during the night. But after the issue was referred to prosecutors, deliveries were allowed to go ahead.

Dozens of Muslims staged an angry protest against the paper late evening in Istanbul, brandishing slogans like "Our dear Prophet, don't be upset, Muslims are with you" and "Cumhuriyet will be brought to account".

Cumhuriyet, founded in 1924 at the behest of the founder of modern Turkey Mustafa Kemal Ataturk, considers itself to be a staunch upholder of the secular values he championed and which the opposition now fears Erdogan is eroding.

Many Muslims consider images of the prophet, not least ones satirising him, to be blasphemous under Islam.

The new issue has already caused controversy within the Islamic world, raising fears of a repeat of the violent 2006 protests over the cartoons of Mohammed printed in Danish daily Jyllands-Posten.

In the Philippines around 1,500 people packed the main square in the Muslim-majority city of Marawi, some raising their fists in the air as a Charlie Hebdo poster was burnt. Several hundred also protested in the streets of the Mauritanian capital.

Meanwhile Iran's foreign ministry spokeswoman Marzieh Afkham said the cartoon "provokes the emotions of Muslims and hurts their feelings around the world, and could fan the flames of a vicious circle of extremism."

While Turkey has condemned last week's deadly Islamist attacks in France that left a total of 17 people dead it has not shied away from warning Europe about a growing "Islamophobia" on the continent.

Without referring directly to Charlie Hebdo, Deputy Prime Minister Yalcin Akdogan on Wednesday denounced publications which he said were insulting the sacred values of Muslims by publishing images of Mohammed.

"We condemn provocations, attacks and defamation against the Muslims and Islamic symbols the same way as we denounced the Paris attacks," he wrote on Twitter.

WASHINGTON — In the post-mortem of the Georgia runoff, there were few Republicans willing to blame the loss on the MAGA takeover of the Republican Party, but many danced around it with some calling out "candidate recruitment" or finding polite ways of saying that Herschel Walker wasn't a good candidate.

Sen. Roy Blunt (R-MO) is on his way out of the office with nary a care about the political expediency of the chief of the Republican Party. He seemed more than happy to place the blame on Donald Trump for picking such a crap candidate.