U.S. worker recently freed from Cuba among White House guests for State of the Union 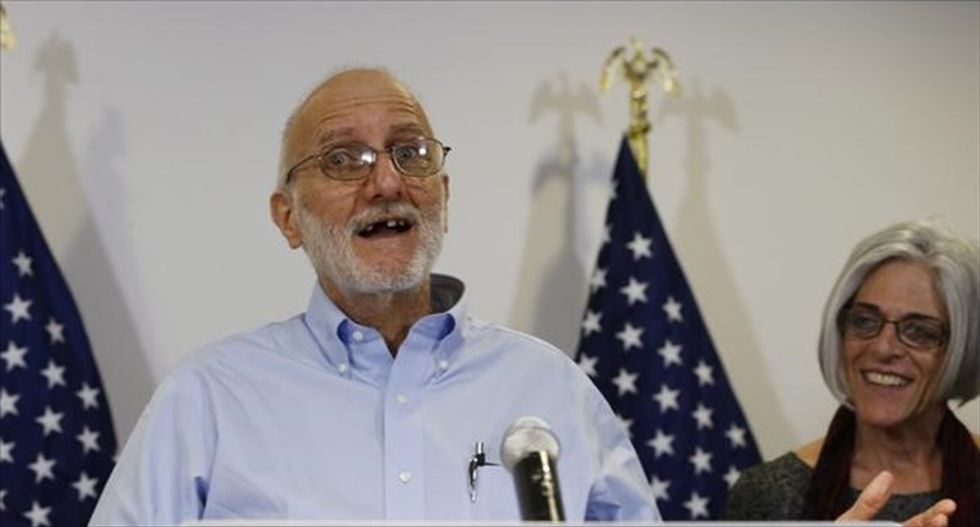 Alan Gross and his wife Judy face a news conference in Washington hours after his release from Cuba on Dec. 17, 2014. Photo by Kevin Lamarque for Reuters.

The U.S. aid worker whose release from a Cuban prison helped pave the way toward restoring diplomatic ties with the communist nation will be among the White House's top guests for Tuesday's State of the Union address.

Alan Gross and his wife Judy were reunited late last year, after Pope Francis helped play a major role in securing his freedom as part of a prisoner exchange.

Obama later credited the historic exchange as the catalyst that led the U.S. to chance its stance toward Cuba, breaking a more than 50-year impasse between the two nations.

The White House on Monday announced that Gross and his wife will be among the more than 20 other guests to sit with First Lady Michelle Obama, Jill Biden and presidential adviser Valerie Jarrett when the president gives his annual address at the U.S. Capitol Tuesday evening.

In addition to Gross, other guests on the First Lady's list include astronaut Scott Kelly, who will soon embark on a year-long mission to live and work at the International Space Station, and CVS Health Corp Chief Executive Larry Merlo, who made headlines in 2014 when his company became the first major pharmacy chain to stop selling tobacco in its stores.

The majority of the guest list, however, consists of many average Americans who may be struggling with employment, affordable education, illnesses or housing - areas that President Barack Obama will likely discuss in his speech as he lays out his policy objectives for 2015.

Some of the guests are current or former students at community colleges around the country, an area Obama is expected to discuss as part of his proposal to make community college free for some students.

President Obama and his wife are also inviting Americans who previously wrote to the White House about things going on in their lives.

One guest is 13-year-old Malik Bryant of Chicago's South Side, who wrote a letter to Santa Claus saying he just wanted to be "safe."

Another is a student who qualified for relief under Obama's immigration policy designed to help illegal immigrant children obtain a work permit and avoid deportation.

Meanwhile Monday, some Republicans announced they were bringing guests who represented visions at odds with Obama's policies.

Her father was killed in an car wreck that some believe was retaliation by the Cuban government because of his efforts to bring democracy to the country.