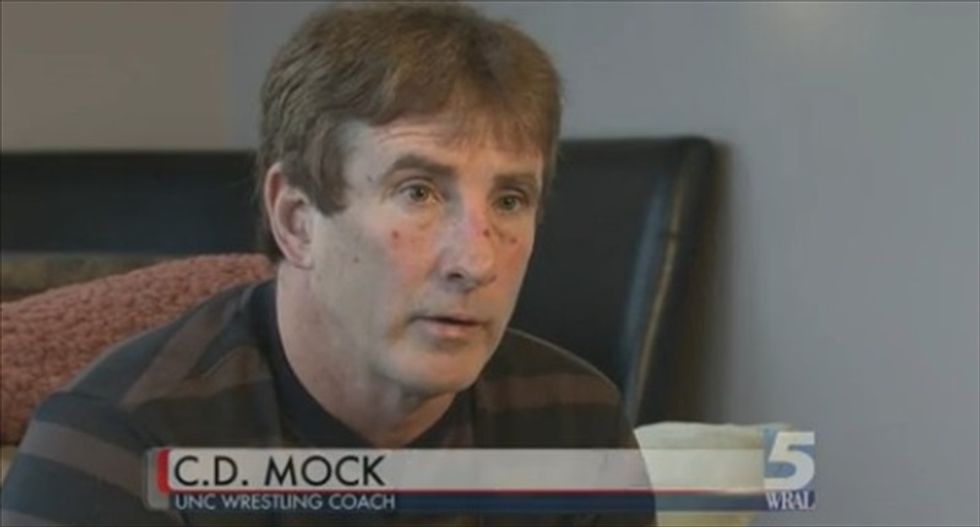 The head coach for the University of North Carolina's wrestling team's efforts to defend his son against rape allegations have veered into a series of attacks on feminists for allegedly encouraging false accusations, Jezebel reported.

"Feminist activist groups take the position that the answer to this problem is to lock up every male accused of sexual assault," C.D. Mock wrote in a blog he created to argue on behalf of his son. "They react this way because for years it was extremely difficult for a rape victim to get a fair shake in the legal system let alone at schools that brushed them under the carpet. My own opinion is we need to get some Christian values back into society but we all know that isn't going to happen in this day and age."

Mock's son, Corey Mock, was expelled from the University of Tennessee-Chattanooga in December 2013 after being accused of raping a transfer student during a late-night party. The alleged victim, who identified herself to Vice Sports as Molly Morris, said she suspected that Corey Mock drugged her drink before assaulting her.

A university investigation initially cleared Corey Mock, who was a nationally-ranked wrestler at the time of the encounter, before the decision was reversed and he was kicked out of school. He has appealed the decision. A local judge ruled late last week that Mock can return to school pending a final ruling on his appeal.

Before the judge's ruling, C.D. Mock accused Vice on his site of promoting "a man-hating feminist agenda" that pressures schools to sanction male students rather than risk losing federal funding for not properly responding to cases involving sexual violence.

C.D. Mock also rejected Morris' argument that she was drugged or otherwise unable to consent to sexual activity with his son after two drinks.

"The idea that a woman who is intoxicated has no control is ridiculous," he stated. "Hate to break it to you feminists out there but the whole idea on college campus' today is to drink alcohol in social environments to reduce inhibitions."

He also criticized the school's decision to revise its policy to require students to give verbal consent before having sex, a policy commonly known as "yes means yes."

"Let's all acknowledge this 'yes means yes' idea sucks," Mock wrote. "The idea that college kids are going to whip out cell phones and record their partner saying 'yes' just before sex is just stupid. It's only a matter of time before guys figure this out and just start arguing that 'the girl said yes', even if she didn't. Now what? Now we just assume all men are lying? It's a totally stupid idea and it will never last and until it changes many more of us will be the carnage of 'falsely accused.'

The coach's comments came under further criticism as his site gained attention.

"The message seemed to be that women were responsible for preventing their own rape, instead of saying that people shouldn't assault other people," Daily Tar Heel columnist Alice Wilder told WRAL-TV. "I was really surprised that someone that is employed here is that cavalier about it."

The elder Mock, who was interviewed for WRAL's story, denounced it on his site in a post on Tuesday, saying he would grant no further interviews.