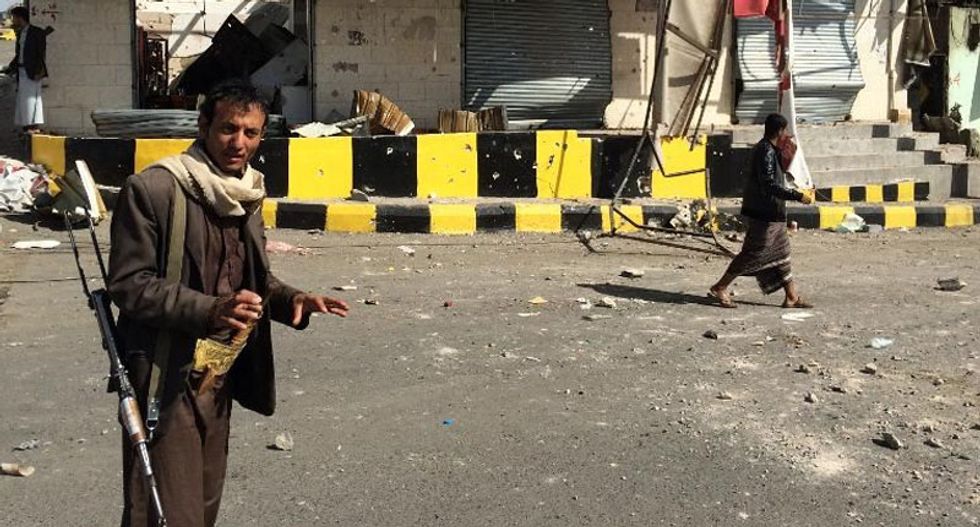 As the UN Security Council began an emergency meeting over the unrest, Secretary General Ban Ki-moon said he was "gravely concerned" and called for an immediate halt to the fighting.

The past two days have seen a dramatic escalation in violence in Sanaa, raising fears that Hadi's government, a key US ally in its fight against Al-Qaeda, will collapse and the country will descend into chaos.

Information Minister Nadia Sakkaf said the militiamen, known as Huthis, had launched an attack on Hadi's residence, after witnesses reported clashes had erupted at the building in western Sanaa.

He was earlier reported to have been in the residence meeting with his advisers and security officials.

"The Yemeni president is under attack by militiamen who want to overthrow the regime," Sakkaf said on Twitter.

Witnesses said the fighting outside the residence appeared to have subsided after two soldiers were killed.

A military official told AFP the militiamen had also seized the presidential palace in southern Sanaa, where Hadi's offices are located.

"The Huthi militiamen have entered the complex and are looting its arms depots," the official said.

Prominent Huthi member Ali al-Bukhaiti said on Facebook that the fighters "have taken control of the presidential complex".

In New York, Ban urged "all sides to immediately cease all hostilities, exercise maximum restraint, and take the necessary steps to restore full authority to the legitimate government institutions."

The fresh unrest shattered a ceasefire agreed after a bloody day on Monday that saw the Huthis, who overran Sanaa in September, tighten their grip on the capital.

Huthi fighters and government troops fought pitched battles near the presidential palace and in other parts of Sanaa, leaving at least nine people dead and 67 wounded.

The militia seized an army base overlooking the presidential palace, took control of state media and opened fire on a convoy carrying the prime minister from Hadi's residence.

Prime Minister Khalid Bahah escaped to his residence, where he has lived since taking office in October, and it was surrounded late on Monday by the Huthis.

Tensions have been running high in Sanaa since the Huthis on Saturday abducted Hadi's chief of staff, Ahmed Awad bin Mubarak, in an apparent move to extract changes to a draft constitution that he is overseeing.

Mubarak is in charge of a "national dialogue" set up after veteran strongman Ali Abdullah Saleh was forced from power in February 2012 following a year of bloody Arab Spring-inspired protests.

Saleh has been accused of backing the Huthis and a source in the presidential guard told AFP some Yemeni troops still loyal to the ex-leader had supported the militia in Monday's fighting.

The source, speaking on condition of anonymity, said groups of soldiers and fighters left the Sanaa home of Saleh's son Ahmed, Yemen's current ambassador in the United Arab Emirates, "to lend a hand to Huthi fighters".

Residents said some soldiers had also abandoned their positions on the hill overlooking the presidential palace without any resistance to the Huthis.

Before his kidnapping, Mubarak had been due to present a draft constitution dividing Yemen into a six-region federation, which the Huthis oppose.

The militants, who hail from Yemen's remote north and fought a decade-long war against the government, have rejected the decentralisation plan, claiming it divides the country into rich and poor regions.

Yemen has repeatedly accused Shiite-dominated Iran of backing the Huthis, who are also known as Ansarullah.

Since their takeover of the capital, the Huthis have pressed their advance into areas south of Sanaa, where they have met deadly resistance from Sunnis including Al-Qaeda loyalists.

Yemen's branch of the jihadist network, Al-Qaeda in the Arabian Peninsula, is considered its most dangerous and claimed responsibility for this month's attack in Paris on French satirical weekly Charlie Hebdo that left 12 dead.

Hadi's government has been a key ally of the United States, allowing Washington to carry out repeated drone attacks on Al-Qaeda militants in its territory.

The increasing unrest has raised concerns that strategically important Yemen -- which borders oil-rich Saudi Arabia and is on key Gulf shipping routes -- will become a failed state similar to Somalia.