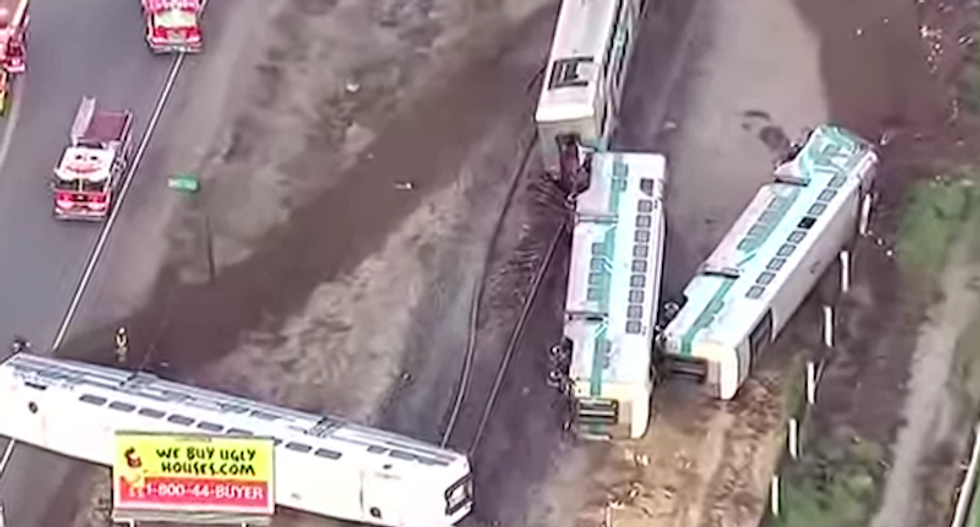 A Los Angeles-bound commuter train hit a truck on the tracks near a southern California railroad crossing before dawn on Tuesday, injuring 50 people, four of them critically.

The truck driver, who was not hurt, left the scene near Oxnard on foot and police found him talking on a cellphone in "some sort of distress" more than 1.6 miles (2.6 km) away, Assistant Police Chief Jason Benites said.

Jose Alejandro Sanchez-Ramirez, 54, was taken into custody on felony hit-and-run charges for leaving the scene, he said.

The force of the impact overturned three double-decker Metrolink rail cars and derailed two others, ripped the truck apart and left twisted wreckage smoldering for hours.

National Transportation Safety Board member Robert Sumwalt told reporters late on Tuesday that the truck appeared to have traveled some 80 feet (24 meters) down the track before hitting the train.

"It was not stuck, it was not bottomed out on the track or something like that," he said. Officials had said earlier that the truck was stuck on the rails.

Police said it appeared the driver of the heavy-duty Ford pickup, who was towing a trailer full of welding equipment, had taken a wrong turn in the pre-dawn darkness and ended up on the tracks as the train approached at 79 miles per hour.

Benites said the driver had undergone unspecified tests at a hospital and that investigators were looking into the possibility that drugs or alcohol were involved in the crash.

"I believe it is safe to say it was not a deliberate act," he said.

"I think we can safely say that the technology worked. It definitely minimized the impact," he said. "It would have been much worse without it."

Ventura County Emergency Medical Services administrator Steve Carroll said 30 of the injured people were treated at hospitals local to Oxnard, an affluent coastal city of some 200,000 about 45 miles northwest of Los Angeles.

Among the most seriously injured was the train's operator, who was in critical condition at the Ventura County Medical Center with extensive chest injuries affecting his heart and lungs, hospital spokeswoman Sheila Murphy said.

The operator, who has not been publicly identified, was able to communicate with doctors, she said.

Sumwalt said investigators would examine the train's recorders and seek to determine if crossing arms were functioning properly.

The incident took place where the Metrolink tracks cross busy Rice Avenue in Oxnard, a street used by a steady stream of big transport and farm trucks.

"It is a very dangerous crossing," said Rafael Lemus, who works down the street from the crash site. "The lights come on too late before the trains come. It is not safe."

The wreck caused major delays to Metrolink lines across Ventura County, and commuters had to use buses.

Amtrak, which suspended its passenger rail service between Los Angeles and San Luis Obispo, said it would resume limited operations on Wednesday.

Three weeks ago a Metro-North commuter train struck a car at a crossing outside New York City and derailed in an accident that killed six people.

In 2008, a crowded Metrolink commuter train plowed into a Union Pacific locomotive in Chatsworth, California, killing 25 people and injuring 135 in an accident officials blamed on the commuter train engineer's failure to stop at a red light.

And in 2005 a Metrolink train struck a sport utility vehicle parked on the tracks in the Los Angeles suburb of Glendale, killing 11 people and injuring 180.