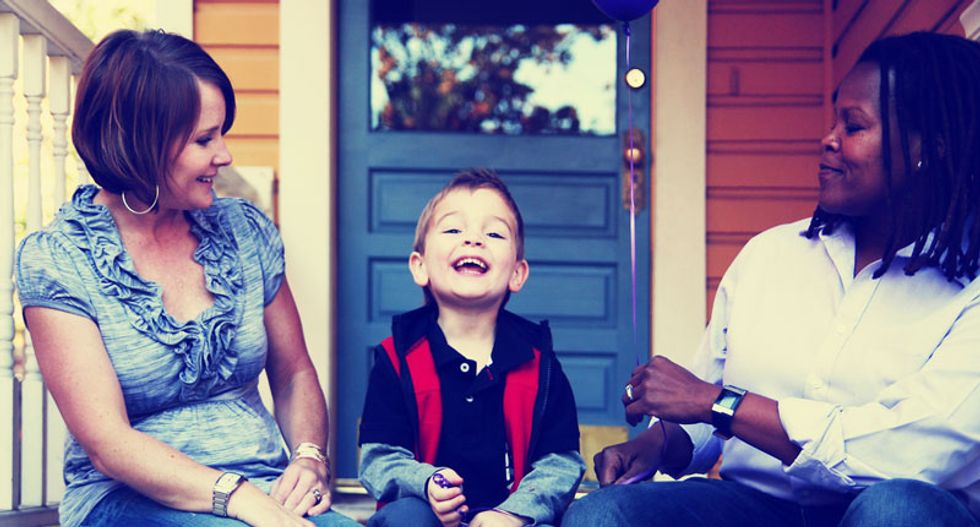 (Reuters) - An Alabama appeals court ruled on Friday that the state must recognize the out-of-state adoption of three children by the estranged wife of their birth mother, lawyers for the plaintiff said.

The decision comes as a handful of Alabama judges have refused to issue marriage licenses to same-sex couples in defiance of a federal ruling, and as another same-sex couple in Mobile has sued seeking similar adoption rights.

Alabama this month became the 37th state where gay marriage is legal after the U.S. Supreme Court refused to stay a federal ruling that struck down Alabama's ban on same-sex marriage. Despite that, Roy Moore, the conservative chief justice of the state's Supreme Court, has directed judges not to issue marriage licenses to same-sex couples.

The U.S. Supreme Court will by the end of June decide whether states can ban gay marriage.

Friday's ruling applies to a case involving an Alabama couple who married in Georgia. One of the women, both of whom are referred to in court documents by their initials, gave birth to three children via insemination, and the other legally adopted them in Georgia.

When their relationship ended, the biological mother kept her former spouse from seeing the children, and the latter sued for visitation rights in Alabama, where they both lived, lawyers for the plaintiff said.

"We are elated that our client and her children will not be kept apart, and that the Alabama Court of Appeals correctly applied black and white constitutional law requiring all states to recognize court orders from other states, including adoptions by same-sex parents,” said Cathy Sakimura, an attorney for the National Center for Lesbian Rights, which represented the plaintiff.

Separately, a plaintiff in the case in which a federal judge last month overturned Alabama's gay marriage ban is suing a local judge in Mobile who has refused to finalize her adoption of her wife's biological son until after the U.S. Supreme Court has ruled on gay marriage.

A hearing in that case has been scheduled for March 2.

The same local judge began issuing marriage licenses to same-sex couples only when he was ordered to do so by U.S. District Judge Callie Granade, after he had defied her initial ruling.