As police were arresting the suspect who allegedly killed his wife, Las Vegas man unloads on CNN 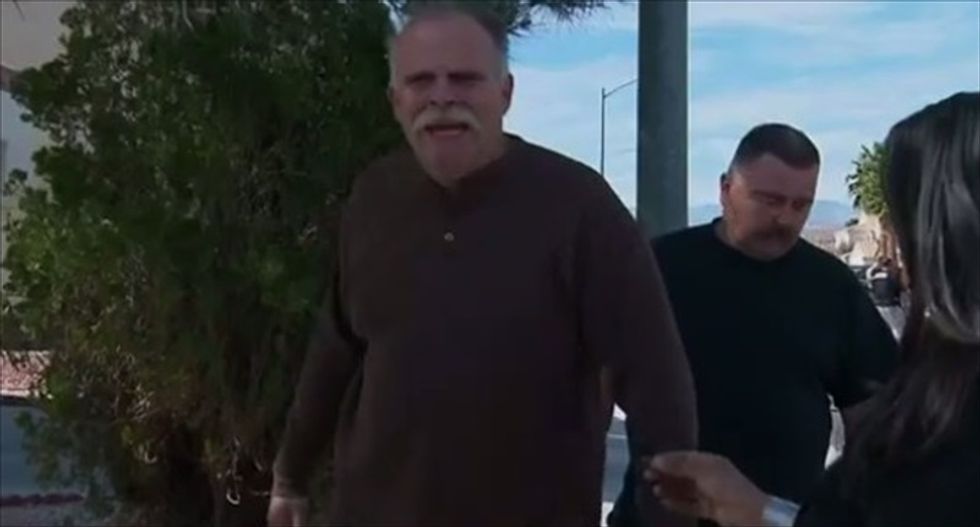 Robert Meyers yells at reporters near his Las Vegas home on Feb. 19, 2015. [YouTube]

A Las Vegas man ripped CNN at the scene of a police standoff for the way the media has portrayed his family -- even as a man suspected in killing his wife was being taken into custody.

The events that led up to the startling confrontation are complex, and multiple versions have roiled the local media.

According to ABC News, things started on Feb. 12 when Tammy Meyers, 44, was giving her 15-year-old daughter a driving lesson when another driver pulled up behind them aggressively and tried to pass them, prompting the girl to honk her horn at the other car.

Authorities have said that Tammy drove home after that encounter, picked up her 22-year-old son, Brandon Meyers, and then drove through the neighborhood looking for the aggressive driver who had passed her earlier. Brandon Meyers was armed with a 9mm pistol during the search.

They had returned home when that driver, allegedly 19-year-old Erich Milton Nowsch Jr., suddenly rolled up on the house, emerged from his car, and began firing his weapon, injuring Tammy Meyers, who died two days later. As Nowsch then drove away, Brandon fired three or four shots at his fleeing car.

On Thursday, police surrounded Nowsch's home and took him into custody, and the encounter was covered by press. And that's when Robert Meyers, Tammy's husband, showed up to yell at CNN and the other crews.

"Are you all happy?" he yelled.

In a series of text messages to CNN, Meyers says that his wife and son and what they did on February 12 has been misreported. He said that they had not gone looking for Nowsch, but instead were actually trying to move the car away from their home out of fear after their lives were threatened.

"My wife and son drove away from home, bad guys following. She lost them and upon coming home turned on street, bad guys are right in front," he said. "After that, bad guys open fire different location. My wife got home, told her son to take cover and after he saw his mom shot he opened fire three times maybe four."

ABC News also reported that the Meyers returned about $6,000 from an online fundraiser after complaints against them when police revealed their version of the shooting.

"No one gets it -- these people came to my home ... my son never shot until then," Robert Meyers said. "If it was the way media is pitching it, then why did son not shoot when they turned corner if he was looking to shoot [when] he had his chance?"

On Thursday, Meyers attempted to walk toward his home during the standoff nearby and was turned away by police before yelling at the reporters gathered outside.

"Are you all happy? You made my wife look like an animal, and my son," he said. "There's the animal, a block away. Are you happy?"

"Obviously very angry with what people have been saying about the Meyers family, blaming them for this tragedy," reporter Sara Sidner said off-camera as Meyers walked away from the gathering of news crews.

USA Today reported that, shortly after Meyers' encounter with the press, Nowsch was taken into custody and charged with attempted murder, murder, and discharging a firearm in a vehicle in connection with the shooting.

Watch the encounter, as posted online on Thursday, below.