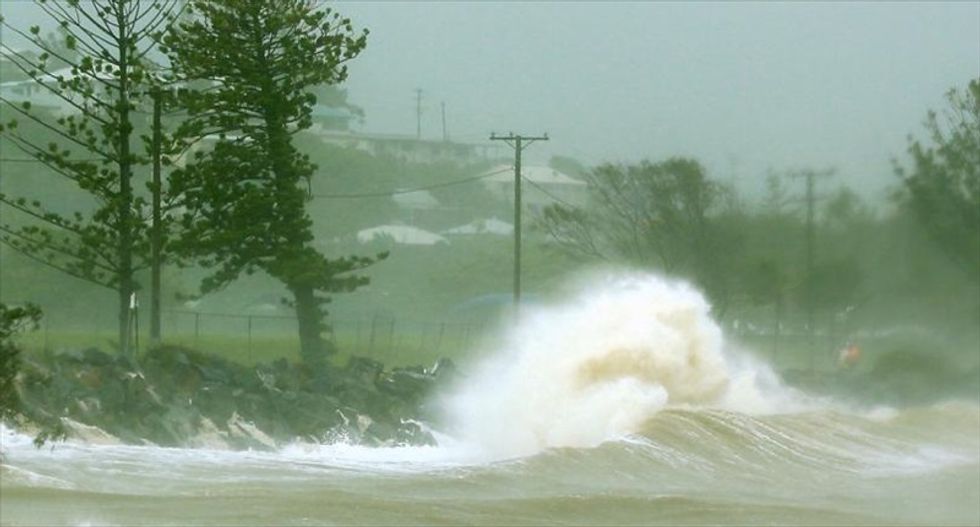 Waves crash into a breakwall after Tropical Cyclone Marcia made landfall in the coastal town of Yeppoon in north Queensland on Feb. 20, 2015. Photo by Shelly Allsop for Agence France-Presse.

A powerful cyclone roared ashore in a heavily populated area of Australia Friday with authorities warning of a "calamity" as howling winds and torrential rain saw residents hunkering down to wait out the terrifying conditions.

Tropical Cyclone Marcia slammed into the Queensland coast just after 2200 GMT Thursday having been upgraded to a category five, the most severe.

Hundreds of people were cowering in cyclone shelters although there were no immediate reports of significant damage.

The tempest made landfall on the Capricorn coast near Shoalwater Bay, north of Yeppoon, a town of 16,000 people some 670 kilometers (415 miles) north of Brisbane.

It is moving south towards Rockhampton, with the impact being felt over a wide area, and officials saying it could impact some 170,000 people in the region.

As far away as Brisbane, residents were sandbagging their homes and clearing yards of any objects that could be whipped away by the wind.

Massive seas, a deluge of rain, and gusts of up to 295 kilometers per hour (182 miles per hour) were being experienced with a storm surge predicted to raise sea levels three metres higher than normal.

"We've lost power and we've got horrendous winds at the moment," said a man identified as Ted, who called the Australian Broadcasting Corporation from his home in Byfield.

"We've got trees all around us and it sounds like jumbo jets flying all around the top of us. All the trees are starting to fall over. The house just shook from a big gust of wind."

"We've lost a lot of sand, erosion has been fairly heavy," she told the national broadcaster.

"I think we'll probably lose three cabins and maybe even some of the bistro area."

"This is going to be a calamity, no doubt about that," he said ahead of the storm making landfall.

"Our primary focus from this point on is the safety of all human life in that area."

"This is an extremely dangerous system," he said.

"There's likely to be significant damage to roofs, buildings, debris flying through the air, widespread power failures and really the potential for widespread destruction over the warning area."

- Standing by your side -

Queensland Premier Annastacia Palaszczuk said the full brunt of the storm would be felt around the Yeppoon area before it eases to a category three as it travels south.

More than 60 schools have been closed and businesses shuttered and a series of domestic flights were cancelled, mostly flying in and out of Gladstone, Rockhampton, Mackay and Bundaberg.

Asked what sort of damage was expected in Yeppoon, she said: "Well, we can't anticipate that, but we know it is going to be severe.

"We have a cyclone shelter already there in Yeppoon, over 600 people housed there. We also have evacuation centers up and running."

Palaszczuk, who was only been in the job officially since last Friday, earlier said "many thousands of Queenslanders are about to go through a harrowing and terrifying experience".

"We will be standing by your side. This a severe cyclone. I want everyone to take all the precautions that they possibly can take," she said, adding that all Queensland hospitals had activated emergency plans.

Queensland has been smashed by several major storms and cyclones over the past few years with Cyclone Oswald, also a category five, flooding parts of the state in 2013, racking up insurance claims of some Aus$977 million (US$765 million).

In a rare occurrence, a second big storm -- Tropical Cyclone Lam -- crossed the coast further north just hours earlier after intensifying to a category four overnight, although it has since been downgraded.

That area, around the Northern Territory Aboriginal communities of Milingimbi and Gapuwiyak, is far less populated.

Police said the remoteness of the region meant authorities were not yet able to fully assess damage in the area.