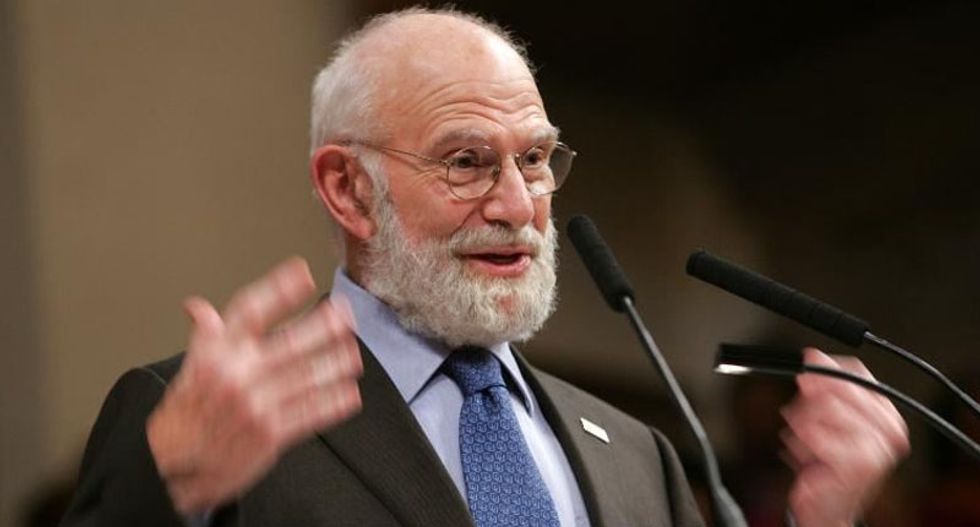 British neurologist and best-selling author Oliver Sacks speaks at the Music & the Brain presentation at the Abyssinian Church at the World Science Festival in New York City on May 31, 2008 (AFP)

Oliver Sacks, the British neurologist and best-selling author of numerous books including "Awakenings," said Thursday he has been diagnosed with terminal cancer.

The 81-year-old disclosed his condition in an essay in the New York Times' Opinion section.

"A month ago, I felt that I was in good health, even robust health," he wrote.

"But my luck has run out -- a few weeks ago I learned that I have multiple metastases in the liver."

He said that he was initially diagnosed and treated nine years ago for a rare kind of melanoma of the eye, which left him blind in one eye, and that he recently learned he was among the "unlucky two percent" in whom that particular type of cancer had spread.

"I feel grateful that I have been granted nine years of good health and productivity since the original diagnosis, but now I am face to face with dying," he wrote.

"It is up to me now to choose how to live out the months that remain to me. I have to live in the richest, deepest, most productive way I can."

Sacks authored the 1973 book "Awakenings," which detailed his real-life experience with patients who suffered from a condition known as encephalitis lethargica, and how they were able to exit -- however briefly -- from their catatonic states with the aid of a drug.

The story was adapted into a 1990 Oscar-nominated film of the same name starring Robin Williams and Robert DeNiro.

That year, the New York Times described Sacks as the "poet laureate of modern medicine." His works have been translated into 25 languages.

Sacks also wrote the critically acclaimed "The Man Who Mistook His Wife for a Hat," which delved into case histories of a variety of unusual neurologic conditions.

Other books of his have explored deafness, colorblindness and hallucinations.

"I have read and traveled and thought and written. I have had an intercourse with the world, the special intercourse of writers and readers," Sacks wrote in his essay.

He also noted he has published five books since turning 65, and has completed an autobiography to be published this spring.

"I have several other books nearly finished," he said.

With his remaining time on Earth, Sacks said he would no longer watch the evening news, or pay attention to arguments over politics or global warming.

"This is not indifference but detachment -- I still care deeply about the Middle East, about global warming, about growing inequality, but these are no longer my business; they belong to the future," he wrote.

He admitted to having some fear about dying, and discussed the sadness of seeing many friends and loved ones die before him.

"Over the last few days, I have been able to see my life as from a great altitude, as a sort of landscape, and with a deepening sense of the connection of all its parts. This does not mean I am finished with life," he wrote.

"On the contrary, I feel intensely alive, and I want and hope in the time that remains to deepen my friendships, to say farewell to those I love, to write more, to travel if I have the strength, to achieve new levels of understanding and insight."