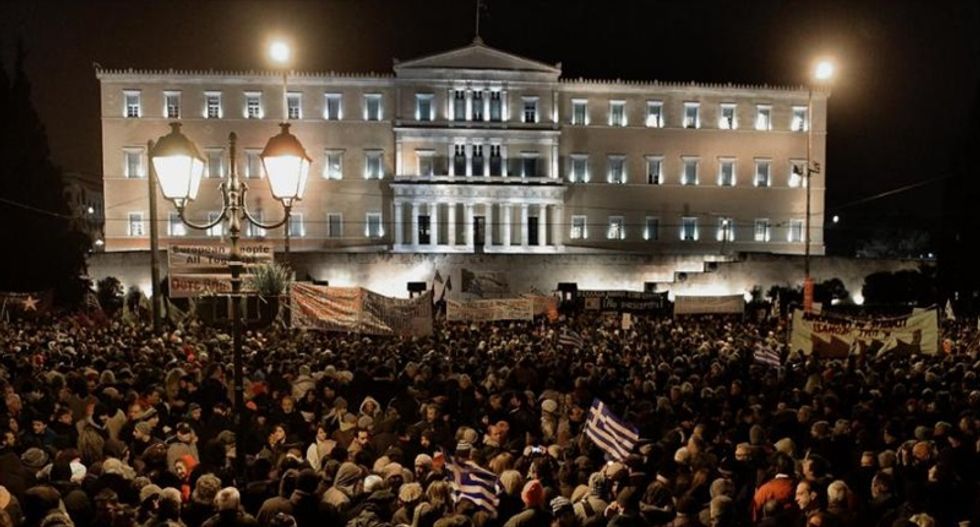 Residents gather onto Syntagma square in front of the parliament building to support the Greek government, on Feb. 11, 2015 in Athens. Photo by Aris Messinis for Agence France-Presse.

Greece's new anti-austerity government failed to reach a deal with its European partners Thursday on renegotiating its huge bailout, with talks now set to go down to the wire next week.

Finance minister Yanis Varoufakis set out Athens' proposals for a new debt program at an emergency meeting with his counterparts from the 19-country eurozone in Brussels.

As he made his case more than 15,000 people turned out on Athens streets Wednesday evening in a display of support for the government's program, according to police.

But Jeroen Dijsselbloem, head of the Eurogroup of eurozone ministers, said six hours of talks produced no agreement on an extension of Greece's 240 billion euro ($270 billion) EU-IMF bailout program.

Greece's bailout is due to expire at the end of February and failure to agree an extension would see Greece default on its giant debts, almost inevitably meaning that it would crash out of the euro.

"We had intense and constructive discussions but there was not enough progress at this point to reach joint conclusions," Dijsselbloem told a news conference after the talks.

"We will continue our talks on Monday and that's as far as I can go at this point."

The talks in Brussels on Monday would probably be the last chance before any new deal could be put to national parliaments for approval before the current bailout ends.

New Greek Prime Minister Alexis Tsipras, whose hard-left Syriza party stormed to victory in elections on January 25, has vowed to tear up the bailout program and end austerity measures imposed under it.

"The extension of the agreement has not been accepted," a Greek government source in Athens said after the talks, adding that negotiations would continue with the aim of "a mutually beneficial agreement" for Greece's economy.

But the new Greek government has faced fierce opposition from its European partners, especially the austerity-focused economic powerhouse Germany.

Tsipras is due in Brussels on Thursday for his first European summit, where he will encounter German Chancellor Angela Merkel, although sources said they had no direct talks scheduled.

The main task in Brussels for Varoufakis -- a former economics professor whose stylish tartan scarf and untucked shirt contrasted with the suits worn by his colleagues -- had been to lay out Greece's new debt plan.

"This was my first Eurogroup meeting, it was fascinating," Varoufakis told reporters.

"We had the opportunity to hear a lot of views and now we are proceeding to the next meeting which will be on Monday -- hoping that by the end of that one there's going to be a conclusion to the deliberations in a manner that is both optimal to Greece and our European partners."

The Greek proposal would see Athens stick to 70 percent of its bailout reform commitments but overhaul the remaining 30 percent. Greece also wants a debt swap that will free up funds for economic growth.

Crucially, the government wants a bridging loan until September to buy time to hammer out new reforms.

At the same time it insists on raising the minimum wage and ditching an unpopular property tax, reversing key reforms demanded by the EU and IMF of previous Greek governments.

It also wants to ditch inspections by the hated troika of creditors -- the European Commission, IMF and European Central Bank.

- Russia, China in the wings -

Tsipras announced plans on Wednesday to draw up a new programme of reforms with the OECD -- the economic club of rich nations that has criticised the EU's embrace of austerity.

Varoufakis meanwhile met with International Monetary Fund (IMF) head Christine Lagarde before he sat down with the ministers, hoping to win the backing of Greece's other major creditor from the bailouts that began in 2010.

European stocks pulled back on the continuing unease over Greece, with the Athens market slumping four percent, while US stocks were little changed as investors awaited the outcome of the Brussels talks.

But Greece has also ramped up threats to look to Russia or China for help, further raising the stakes for European unity as it wrestles with economic stagnation and the crisis in Ukraine.

Tsipras has been invited to Beijing to meet his Chinese counterpart Li Keqiang, a government source said Wednesday.

Russian Foreign Minister Sergei Lavrov meanwhile said during a visit to Moscow by Greek counterpart Nikos Kotzias that Moscow was ready to consider an appeal for aid by Athens.