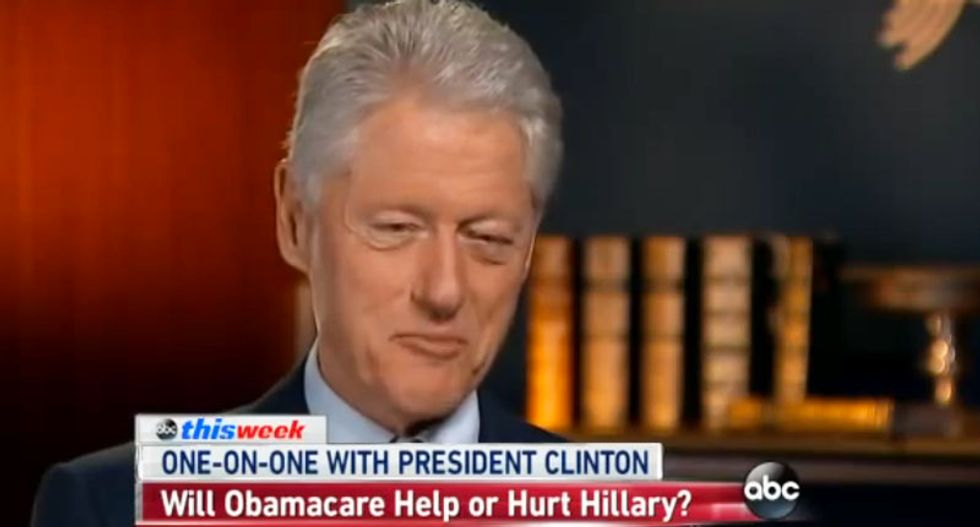 Appearing on ABC’s This Week with his former communications director, George Stephanopoulos, former President Bill Clinton expressed dismay with the Republican Party's attempts to destroy the Affordable Care Act, claiming that the the GOP is "sitting around just begging for America to fail."

Addressing a clip of  Sen. Lindsey Graham (R-SC) claiming he intends to change his references to "Obamacare" as "Hillarycare" if the national healthcare program collapses because he wants presumptive Democratic presidential nominee Hillary Clinton "to own it," the former president marveled at the GOP's obsession with wanting the program to fail.

“This bill [Obamacare] has already produced a lot of good results," Clinton explained. "Look, they are desperate for this bill to fail. Because, if it’s not a failure, everything they’ve been telling us since 1980, 'big government’s bad,' is wrong."

He continued, "They so badly want it to fail. Can you remember a time in your lifetime when a major political party was sitting around just begging for America to fail? I don’t know what’s going to happen. I would be shocked if it fails. I just think when all these dire predictions don’t come out, if they don’t, I believe that pretty soon, within the next several years, it will be like Medicare and Medicaid. It will be a normal part of our lives and people will be glad it’s there.”

Speaking of the 2008 campaign that saw Hillary Clinton lose the Democratic nomination to Barack Obama, Clinton said campaigns must be about having "a plan for the future," but cautioned that candidates need to define themselves to the voters but the opposition does it first.

"You have to have a strategy for presenting your true self to the voters in an environment where there are unprecedented opportunities for those who don't want you to win to paint a different picture of your true self," he explained.

Watch the video below, uploaded to YouTube by yazchattiest: