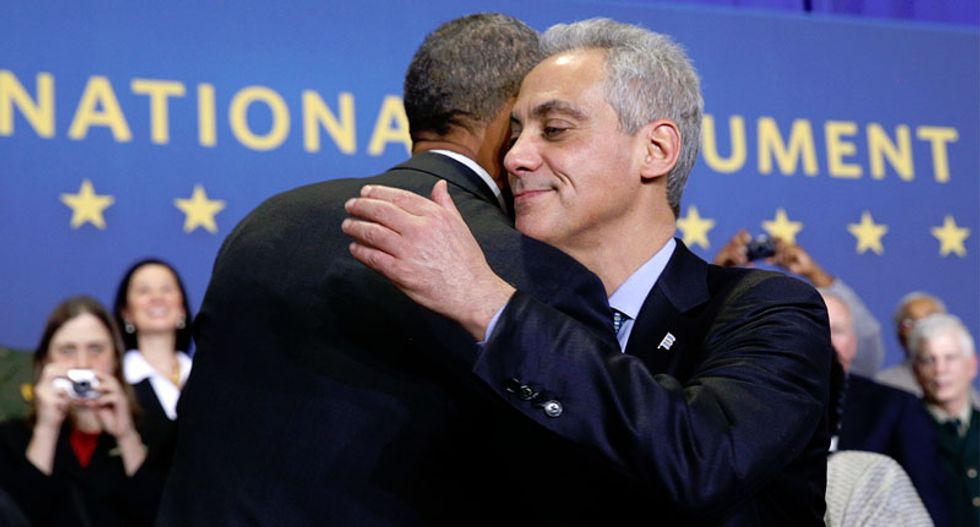 Chicago Mayor Rahm Emanuel will easily take first place in Tuesday's municipal election, but polls show he may miss the 50 percent mark needed to avoid a run-off in the race to lead the financially challenged, third-largest U.S. city.

Emanuel, 55, a former adviser to President Barack Obama seeking a second term as mayor, has already spent millions of dollars in the non-partisan race against four challengers, and a second round will mean six more weeks of expensive campaigning.

Emanuel is close to the mark, getting 48.3 percent of the vote in a recent Ogden & Fry poll. His nearest opponent is Cook County Commissioner Jesus "Chuy" Garcia at 26.5 percent, followed by businessman Willie Wilson with 15.2 percent.

"It could go either way," said Don Rose, a Chicago political consultant, on the run-off possibility. "It's a razor's edge."

Garcia, a progressive Democrat, would have a tough fight in a second round - he has a paltry campaign fund and would struggle to come anywhere near Emanuel's level of advertising.

Garcia has argued that Emanuel pays more attention to the city's upper class and downtown than the poor and the neighborhoods.

Emanuel's opponents have pounded him over closing dozens of public schools in poor areas, a continuing high crime rate, and regressive fines and fees, such as red-light camera tickets.

Kate Rooney, 30, who voted for Emanuel in 2011, picked Garcia in early voting this time. She said she wanted someone more liberal, especially since Illinois' new governor is Bruce Rauner, a budget-cutting Republican.

"I just don't trust Rahm," said Rooney. "I don’t feel like things have changed for the better."

But Emanuel, known for his sometimes abrasive style, has argued that he had to make tough choices to rein in the city's budget deficit, which is expected to grow to $1.2 billion by next year due to an increase in payments to public pensions.

Many trade unions have endorsed him, as have the city's major newspapers.

Emanuel has hugely outspent other candidates and funneled $7 million to TV ads, including one showing him getting a hug from Obama, according to the Chicago Tribune.

Garcia by contrast spent $60,000 in the fourth quarter and ended the period with $817,000 in his campaign fund. He just started to buy TV spots this month.

Chicagoans will also vote for city council members on Tuesday.

Donald Trump has made history again.

On Wednesday, the House of Representatives voted to impeach him a second time because of his role in inciting violence before the coup attempt last Wednesday at the U.S. Capitol. Trump is now the only president to have been impeached twice, and could easily have been impeached on other occasions for his many other crimes against democracy, the Constitution and the rule of law.