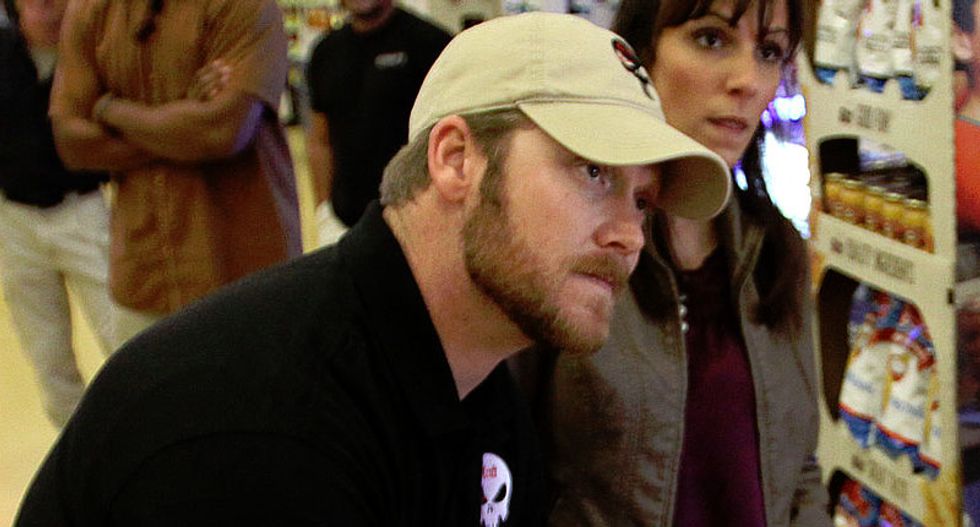 Shortly before being slain, Chris Kyle, the Navy SEAL whose autobiography was turned into the hit movie American Sniper, texted a friend next to him in a pickup truck that the man who moments later would shoot them both was "nuts," a defense lawyer said on Wednesday.

A Texas jury heard opening statements and the first witness in the trial of former U.S. Marine Eddie Ray Routh, 27. He is charged with murdering Kyle and Chad Littlefield, Kyle's friend and neighbor, in February 2013 at a shooting range about 70 miles (110 km) southwest of Fort Worth.

Routh was driven to the range by Kyle, who had been helping fellow veterans heal the mental scars stemming from combat.

As the three men sped over Texas country roads, Kyle, who was credited with the most kills of any U.S. sniper, sent a text to Littlefield that read: "This dude is straight up nuts," defense attorney Tim Moore told jurors.

Prosecutors told the jury of 10 women and two men in rural Erath County that Routh was aware of what he was doing and acted "knowingly and intentionally" when he gunned down Kyle and Littlefield.

Kyle, a ranch hand turned military man, has been lionized in his home state of Texas where many people see him as a model of dedication to country and servicemen. His story has gained renewed attention thanks to the Oscar-nominated movie directed by Clint Eastwood and starring Bradley Cooper.

Defense attorneys did not dispute that Routh shot the men but pressed their case that he should be found not guilty by reason of insanity. They said he was in a paranoid psychotic episode and did not know his actions were wrong when he shot the two men. They said Routh suffered from post-traumatic stress disorder, or PTSD, caused by overseas deployments.

Routh, dressed in a dark suit and sporting a crew cut, took notes at points through the trial.

Kyle's widow, Taya, the first witness called, said her husband was renowned for his skills as a sniper and serviceman.

“He was good at what he did," she said, choking back tears as she recounted life with him and learning of his death.

She said she knew something was amiss when she spoke by phone to Kyle at the shooting range, a scenic location he often visited to help fellow veterans trying to manage PTSD.

"I could tell something was up," she said, adding Kyle was quick on the phone, likely to avoid letting Routh know his irritation.

"I texted 'Are you OK? I am getting worried,'” she said. No response arrived.

A few hours later, a police officer came to her house to say that officers were searching for her husband's pickup truck. Shortly after that, she learned her husband was dead, she told the jury, trying to hold back tears.

Staff at the lodge that housed the shooting range and emergency medical technicians said Littlefield's body was found on a shooting platform, while Kyle was found a few yards away in the dirt. Both were soaked in blood and there were no signs of life.

"Chris was face down, nose in the dirt," one of the lodge staff said. The two were declared dead at the scene.

"They can really talk and commiserate and get some healing done," she said of the outings.

Erath County District Attorney Alan Nash said Routh shot the two men multiple times in the back and stole the truck and weapons, knowing it was wrong.

Nash said Routh served as a weapons tech in a safe zone in Iraq. The defense told the jury that Routh was severely affected mentally by his earthquake relief efforts with the Marines in Haiti in 2010.

The trial is expected to take about two weeks. If Routh is convicted, prosecutors said they would seek a life sentence.

(Reporting by Jon Herskovitz; Additional reporting by Lisa Maria Garza in Dallas; Editing by Will Dunham and Peter Cooney)