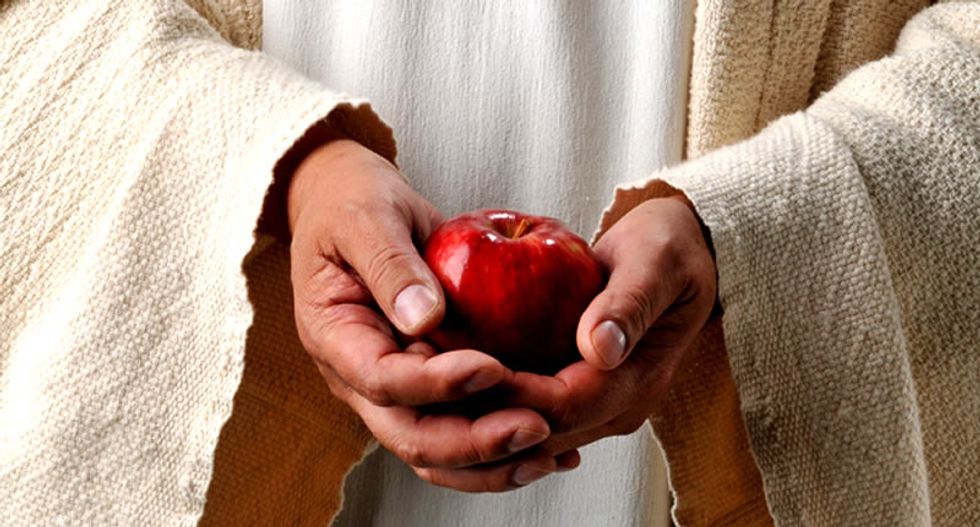 A student at an evangelical college had an apple thrown at him for asking a question about the school's position on homosexuality, Time's Elizabeth Dias reports.

The incident occurred during the "Town Hall Chapel" at Illinois' Wheaton College, a question-and-answer session with President Philip Ryken. The official position of the evangelical college -- its most famous alumnus is the Reverend Billy Graham -- is that marriage is a holy bond between one man and one woman, and it expects students and faculty to adhere to that standard.

Philip Fillion, a music major, does -- he is a married heterosexual. However, in a public note on his Facebook page, he asked President Ryken a question about the school's position.

"All students, via the Community Covenant, and all faculty, via the Statement of Faith, are required to affirm a sexual ethic that denies everyone except celibates and married straight people a place in the kingdom of God," he began.

"This sexual ethic is not at all universal and depends on a reading of scripture that is incredibly narrow and ignores history, culture, and science," Fillion continued.

"Why is it the case that our college, in documents we all must agree to or be expelled, insists on formally condemning and denying equality to our gay and lesbian brothers and sisters, on spurious theological grounds, yet completely leaves behind baptism and Eucharist, which Jesus Christ himself instituted to grow and strengthen the Christian community?"

After reading his question off his Facebook page, he was walking back to his seat when another student threw an apple at him.

According to the note -- addressed to "Dear Enemy" -- the alleged apple-thrower posted on campus bulletin boards, he did so "as a warning against insulting the Spirit of grace."

"I will be the first to admit that I am a sinner," the note's author, Roland Hesse, wrote. "But my sin does not define me. Truth judges me. The righteousness of Jesus Christ defines us."

"In regards to 'casting a stone,'" he continued, "you would be mistaken to think that I threw the apple out of hatred. I have strong aim and could hit a head at fifteen meters if I wanted to. No, I threw it purposefully as a warning against insulting the Spirit of Grace."

A Wheaton College representative told Time that "President Ryken did not see the incident and did not fully understand what happened until after chapel ended."