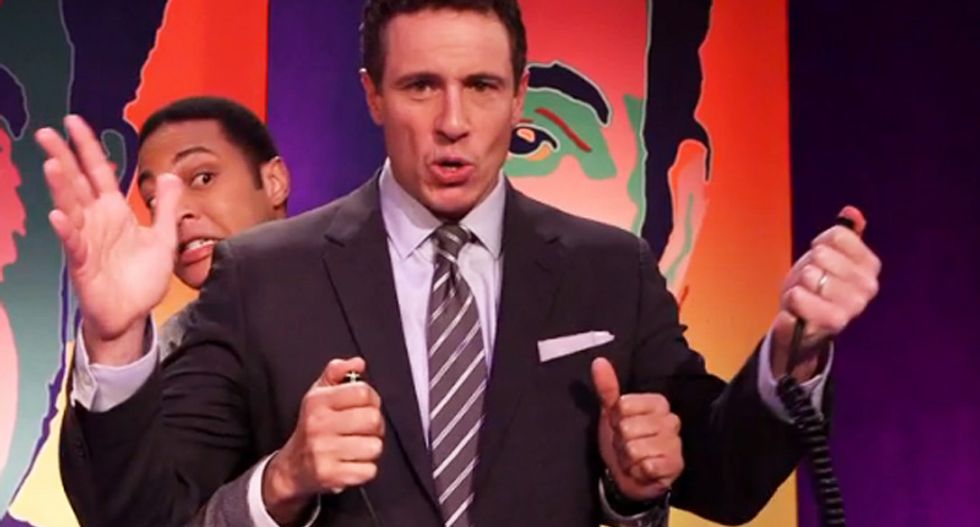 As part of CNN's quest to find all things that have gone missing -- airplanes and blonde women come to mind -- they have turned their gaze homeward and are looking for something very precious and valuable to them.

No, not their credibility, but nice guess.

I am, of course, speaking of viewers who have seemingly vanished without a trace as if into a black hole or something.

This, of course, is not a new development. CNN has been in a slide for a long time  because there are multiple cable news outfits competing for the all-important 'airport boarding area zombie busybox' market and 'channel my grandfather leaves on all day because he dozed off again -- but better check his pulse just in case' demographic.

And who better to stop the bleeding than president of CNN Worldwide, Jeff Zucker, who single-handedly destroyed NBC and was given about $40 million dollars by Comcast to go as far away as possible, making him the lovechild of magazine-wrecker Tina Brown and HP-demolisher Carly Fiorina.

CNN snapped up Zucker to do that 'voodoo that he do' for them because the network needed something young and fresh and happening like the Zucker-okayed 'Joey' at NBC which was groundbreaking in the sense of: 'bury it before it starts to stink even more.'

The problem Zucker discovered at CNN is quite simple: they are bad at news.

The CNN that once gave us riveting live coverage of Desert Storm way back when, is now the network of the "Blizzardmoble" and a seemingly addled Blitzer -- who is a far cry from the the Young Wolf who ducked explosions in one of our countless Middle Eastern bomb-them-into-freedom campaigns.

If you played the 'evil or stupid?' game with the cable networks it would look like this:

Zucker's master rebuilding plan seems to be to turn the once venerable news network ( no, really, it was -- wake up your grandfather if you can and ask him) into the joyous  home of relatable hey-we're-just-like-you happy-go-lucky news anchors. People you would totally have a beer with on Trivia Tuesday because they're  smart, but also wacky and zany when they're not putting on their in-character serious faces and telling us about death and horror and awfulness in countries that aren't awesome like the US. And really: we are awesome. I heard it on cable, so it must be true.

So we now can look forward to The CNN Quiz Show, hosted by Kathy Griffin's New Year's date, Anderson Cooper.

And who wouldn't want to see Jake Tapper and Alisyn Camerota do a gleeful but sloppy white person high-five? Or guy-who-was-hired-because-his-father-was-revered (Chris Cuomo) make a stab at a terrorist fist-bump with rape & orthodonture correspondent Don Lemon? Also, too, Erin Burnett and some white guy.

Seriously. Who is that guy?

Here, watch the preview below:

This obviously has some potential pitfalls attached to it. Like we could discover that some of them are, you know, attractive newsreaders with pleasant voices who are secretly morons who would get smoked on Teen Jeopardy.

And if you think I'm kidding: