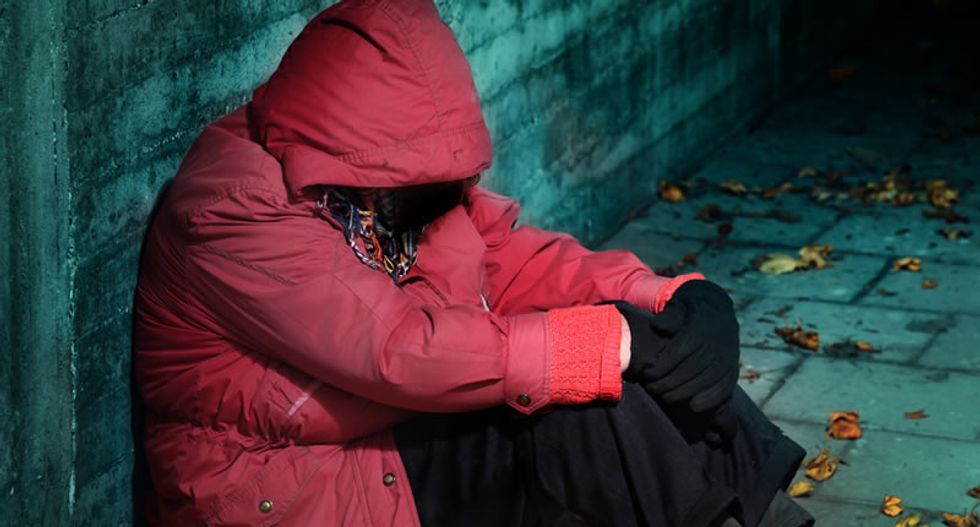 A Woman Sitting Against A Brick Building (Shutterstock)

A homeless Ohio woman who was forced to walk eight miles to prevent her rapist from walking free has been inundated with offers of material and financial support, The Columbs Dispatch's John Futty reports.

The woman was raped by Paul Hubert on March 12, 2014 while she was sleeping under a bridge. She claimed that Hubert struck her in the head repeatedly, and police eventually found DNA evidence linking him to the crime.

Hubert, however, claimed that he had paid the woman for sexual favors, and the only way the prosecution could dispute his claims would be to have her testify.

Although the prosecution provided her with a small fee for transportation, it wasn't enough, forcing her to panhandle for bus fare -- or, on at least two occasions, walk the 8-mile round trip to the courthouse.

According to Detective James Ashenhurst of the Columbus Police Department, Hubert "was counting on her not showing up. If it wasn’t for her cooperation, he would have walked."

The woman said that she believed she had no choice. "I didn’t want to see him do it to anyone else,” she said. “If he would do that to me, imagine what he might do to his next victim."

After her story received national media attention earlier this month, numerous people contacted both the courthouse and the Columbus Police Department asking how they could provide help. Det. Ashenhurst spent Wednesday searching for her, finally locating her among other homeless people in a parking lot.

He escorted her to a nearby McDonald's, where after eating a Big Mac, she agreed to speak to Dispatch reporter.

She admitted to being an alcoholic, and said that she thought that her addiction disqualified her from assistance programs -- but she also added that she's not sure if she's ready to sober up.

However, she said "I want to get off the streets. I'm tired of this. I’m tired of dumpster diving and wondering where I’m going to get my next meal from."

She then added, "in a way, I want to [get sober]. I’m tired of waking up with the shakes, choking, gagging. You don’t know some of the shakes I’ve had."

When Det. Ashenhurst read her some of the emails his department had received, she began to cry. "People do care," she said. "I want to thank them all. Thank you for being so compassionate to a person that is in my shoes."

The woman has been offered a place in the Maryhaven treatment center and an apartment at the nearby Commons at Chantry apartment complex, but she is unsure whether or not to enter the program.

Maryhaven's executive directer James Alexander told the Dispatch that "we cannot force anyone to use our services [but] when she is ready, it can happen."