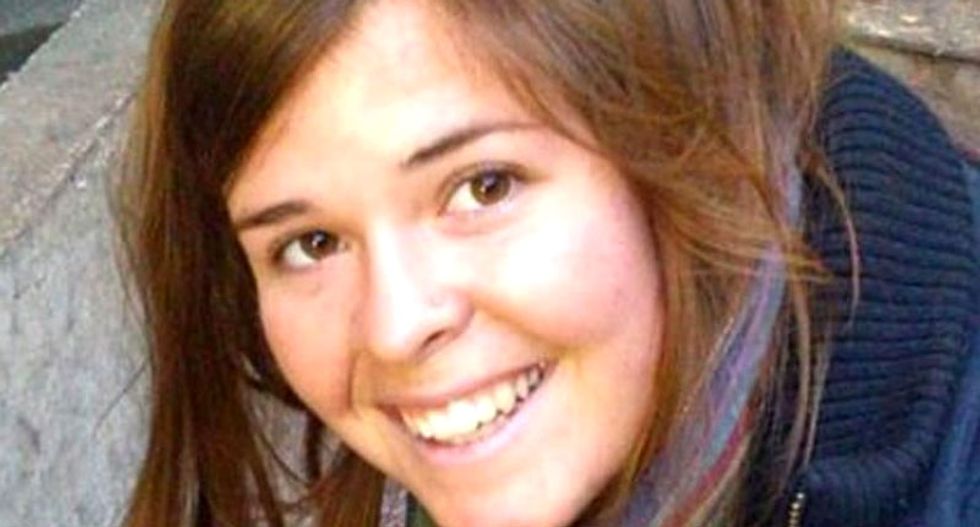 Kayla Jean Mueller was taken hostage in August 2013, while working as an aid worker in Aleppo (AFP Photo)

On Tuesday, the radical Islamic group the Islamic State announced that 26-year-old hostage Kayla Mueller was dead, reportedly in a Jordanian bombing raid.

As Talking Points Memo reported, while much of the world reacted with horror and grief at the death, many conservatives took to social media to celebrate the killing and call the young aid worker a terrorist sympathizer and "anti-Israel bitch" because of her work on behalf of the occupied people of Palestine.

In a piece titled "Kayla Mueller: Dead ISIS Hostage Was Jew-Hating, Anti-Israel Bitch," conservative blogger Debbie Schlussel wrote, "No tears for the newly-departed Kayla Mueller, the ISIS hostage whose parents confirmed today that she is dead."

"Mueller was a Jew-hating, anti-Israel piece of crap who worked with HAMAS and helped Palestinians harass Israeli soldiers and block them from doing their job of keeping Islamic terrorists out of Israel," Schlussel wrote.

"I have no sympathy for any of these 'American' (in name only!) hostages of ISIS," she went on. "And my attitude when I hear they’ve been snuffed out is, so sad, too bad."

One conservative website urged readers to pause before they mourn Mueller's death and ask whether her support of Palestine was ultimately what killed her.

"People should be asking is why this young American girl was in Syria in the first place," said Conservative-Headlines.com. "The fact is that Kayla Mueller was a Cultural Marxist who talked about her 'privilege.'”

On Twitter, some conservatives mocked Mueller for being "liberal."

Sad that Kayla Mueller was anti-Israel activist. If she understood both sides she might have avoided idealizing the enemy that killed her
— Joel Pollak (@Joel Pollak)1423615780.0

The website Shoebat.com's Lee Kaplan said, "(T)he press tries to paint Kayla as a selfless volunteer helping poor Arab refugees. She may have even helped some injured Arabs in refugee camps. But don’t be fooled where her sympathies laid; she was working to support the goals of Palestinian irredentist/terrorists and to interfere with the IDF on behalf of terrorist groups. As an ISM activist she was a tool for the worldwide jihad."