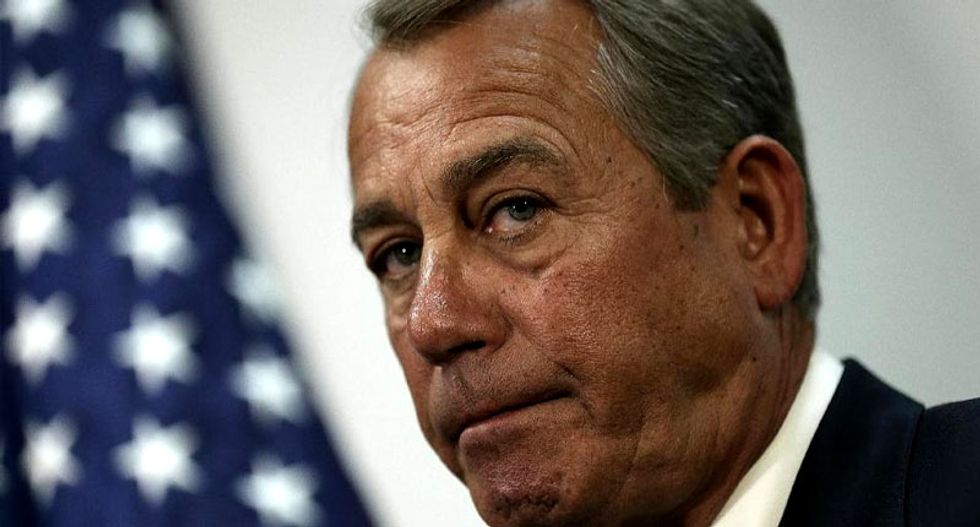 Conservative Republicans urged House of Representatives Speaker John Boehner not to capitulate in a fight with Democrats over President Barack Obama's immigration policy that threatens a partial Homeland Security shutdown later this week.

The conservative lawmakers, led by Representative Jeff Duncan, circulated a letter to Boehner and other House leaders telling them to hold the line in opposing Obama's executive actions shielding millions of undocumented immigrants from deportation, a Duncan aide said on Tuesday.

"Now is the time to stand firm against these unlawful executive actions," said the letter, signed by about 20 conservative Republicans so far.

The House last month attached provisions to block spending on Obama's immigration orders to a $39.7 billion bill to fund the Department of Homeland Security. The measure has stalled in the Senate, where Democrats have insisted on a "clean" security funding bill free of such restrictions.

If the dispute is not resolved by Friday at midnight, spending authority will be cut off for the agency, which spearheads domestic counterterrorism efforts and secures U.S. borders, airports and coastal waters.

If that happens, the department's essential protective staff would stay on the job, but there would be no money to pay them until new funding is approved.

The letter from conservatives told House leaders they should not view a recent Texas court decision temporarily blocking Obama's actions as a way out of the funding impasse, noting the court ruling could be overturned. Obama says his actions have legal precedent.

Boehner is expected to discuss the path forward on Wednesday with House Republicans, who return to Washington on Tuesday after a week-long holiday recess. Some Republican senators say a short-term funding extension for Homeland Security looks increasingly likely.

Among those signing the letter to Boehner were some of the most conservative members of Congress, including Representatives Steve King, Louis Gohmert, Jim Jordan, Matt Salmon and Mick Mulvaney. It was addressed to Boehner, Republican Majority Leader Kevin McCarthy and Majority Whip Steve Scalise.

Representative Steny Hoyer, the second-ranking House Democrat, told reporters on Tuesday he was "absolutely positive” that if a "clean" funding bill was put on the House floor, it would pass, likely with a combination of minority Democrats and Republicans.