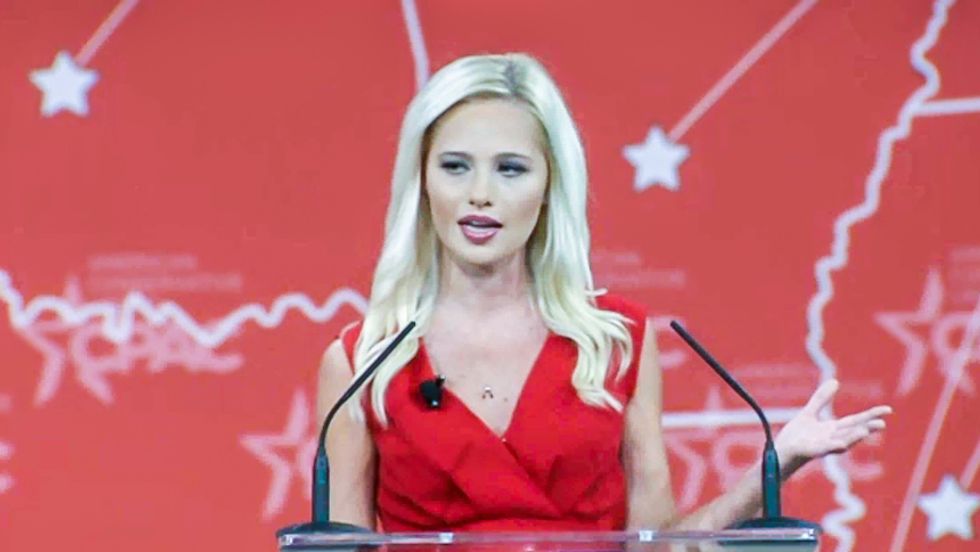 CPAC saved for Saturday morning one of its rising stars, 22-year-old South Dakota TV host Tomi Lahren, who spent part of her speech addressing complaints about the lack of diversity on America's right. Lahren acknowledged that most "Millennial" voters, who are between 18 and 33 years old, lean left politically and on social issues. But she wanted to reassure the folks at CPAC that not everyone in their 20s was a liberal Democrat in the making. But rather than describe what she said, it's probably best just to let her speak for herself. Here's what she said...

According to those on the outside we are the party of old, rich, white males. But I have a little bit of a problem with that, because I don't really fit into that narrow box.

And rich, which almost makes me laugh out loud. I grew up in South Dakota, so that's smack dab in the middle class in middle America.

And white? OK, you got me there.

But unlike my friends on the left, I'm not going to stand up here and apologize for being white, because I am what I am, and I'm sorry, you can keep your white guilt.

And lastly, male. Hm. The so-called 'War on Women' is somewhat problematic for someone like me, because last time I checked I don't hate myself and I'm not at war with myself. Ladies, can we agree on that? Anyone?

See, women like Sandra Fluke will have you believe the only way to be pro-woman is to lobby for free birth control. But, sorry, hun, I'm a Republican, and I can take care of myself. And besides that, I don't know about you, but I don't really want the government anywhere near my body or my health choices, because have any of you seen how Obamacare or 'healthcare dot dud' has been working out?

So, I think we've gone through this: Old, rich, white males. I want to remind you, let's look at the top three Democrats for 2016. You've got Hillary, Elizabeth Warren, Joe Biden? Old, rich, white, and if the pantsuit fits, male too?

I don't know, it's an interesting lineup, what do you guys think?