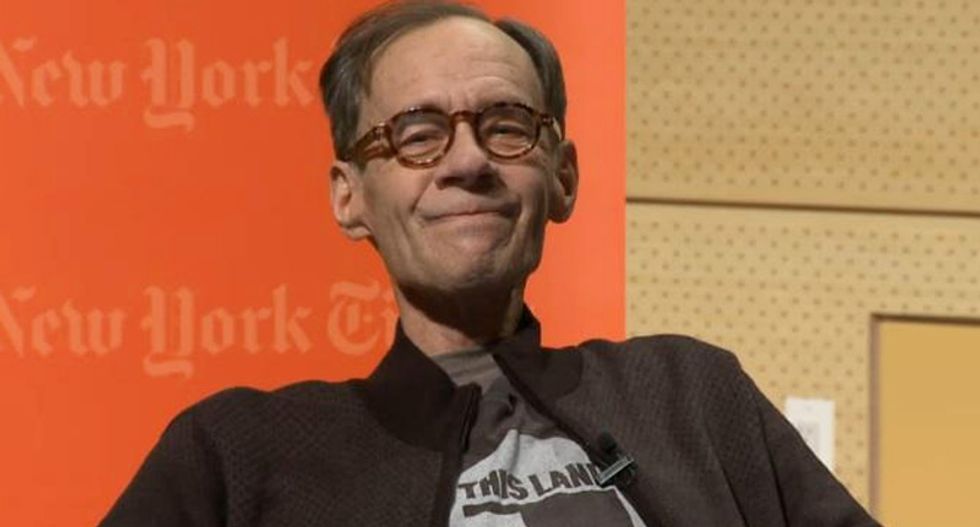 New York Times media columnist and journalist David Carr died suddenly Thursday night after being taken from the Times' newsroom to a hospital.

Since  my Twitter feed is heavy on journalists, I spent the evening reading an extraordinary outpouring of tributes to man who was universally admired as an editor and a writer, but more importantly loved for being the kind of person that he was. From what I can tell, Carr was the personification of the demanding yet supportive chain-smoking editor and mentor to several generations of writers who absolutely adored him above all for his humor and his humanity.

One of the finer tributes came from Dave Weigel who praised Carr for as being "someone who understood so delicately and elementally how people lived." Even if you had no passing familiarity with Carr, you should go read it.

On his Twitter timeline, Seth Mnookin will break your heart relating the story of meeting with Carr after he had dropped his youngest daughter off at college, before taking a walk with Mnookin and his five-year-old. According to Mnookin, Carr told him he was lucky his kids were so young, because, "The one thing I really know how to do is be a dad. And now all the girls are gone. So what now?"

Remembering leaving my daughter -- an only child -- behind at a college an ocean away years ago, I recall all too well that feeling.

Carr had a, well, let's call it an 'interesting life' before becoming a revered writer and journalist. As documented in his book, 'The Night of the Gun: A reporter investigates the darkest story of his life. His own' Carr was a crack addict when his youngest children were born; admitting that he never felt he deserved the blessings of life that he received after turning things around and becoming sober.

By Friday afternoon there will be enough remembrances on the Internet written about Carr to fill a book, but I'm going to pivot elsewhere since I have nothing to add there. As a reader, I only knew Carr as having been been an excellent and -- more importantly --  engaging writer, which tops in my book with so much available online to choose from and not enough time to read it all.

In stark contrast to Carr whose writing was steeped in intelligence, good humor, and humanity,  there is  the sad case of Charles C. Johnson, the prolific tweeter and maker-up-of-things on the Internet. I've made a concerted effort to avoid Johnson because, quite frankly, I find him an  empty vessel and worthless even as a topic of derision.

I recently made an exception, writing about Johnson when he got into a slap-fight with the equally loathsome and self-promoting Dana Loesch, only because it promised to be a flaming 12-car-pileup of Breitbart insider gossip and backbiting.  But, like most Johnson story 'pitches,' it ended up being a big nothing.

I also avoid Johnson because I think it's necessary to starve the beast; don't even give him the hate-clicks he covets. I figure let him spiral into the obscurity that he so richly deserves.

Johnson was particularly dickish about Carr on Thursday night, but we're not going to go there.

However, on the sad occasion of David Carr's death, I would be remiss if I didn't revisit an interaction that Carr had with Johnson on Twitter after Carr wrote a less than flattering portrait of Johnson back in December.

A miffed Johnson decided to seek divine Internet retribution on Carr by writing about his drug addiction -- regardless of the fact that Carr wrote a New York Times bestseller about just that topic.

As the kids say: derp.

Here is Johnson teeing one up for Carr, who responded by knocking it and the self-proclaimed "investigative journalist" who delivered it, over the fence and into the next county: