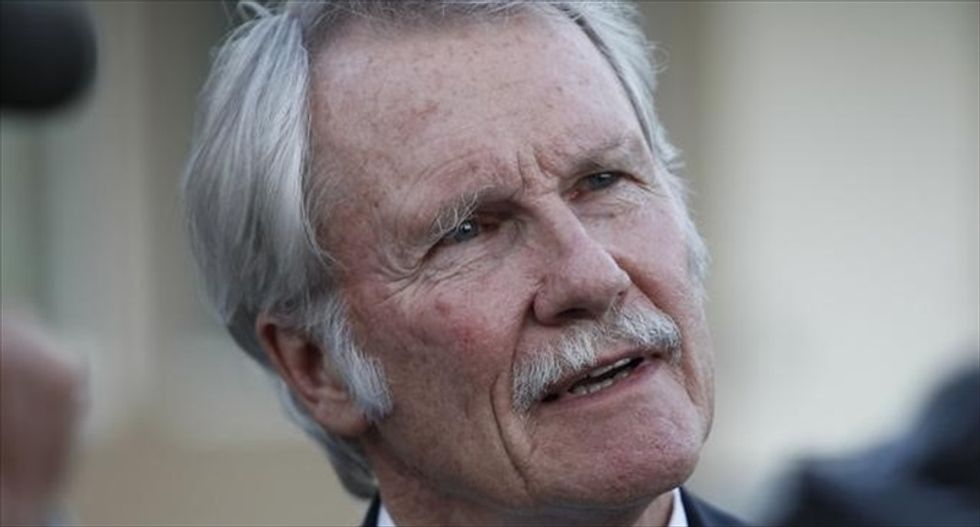 Oregon Governor John Kitzhaber attends a prayer vigil after a shooting at Reynolds High School in Troutdale, Oregon on June 10, 2014. Photo by Steve Dipaola for Reuters.

In a response to questions by Oregon media over whether he might step down amid a criminal probe over potential influence-peddling violations, embattled Governor John Kitzhaber said on Wednesday he had no intention of resigning.

Kitzhaber, a Democrat re-elected to an unprecedented fourth term in November, has been dogged for months by mounting allegations that fiancee Cylvia Hayes used her role in his office for personal gain. He has faced increased pressure to step down.

"I have no intention of resigning as Governor of the state of Oregon," Kitzhaber said in a statement on Wednesday afternoon. "I was elected to do a job for the people of this great state and I intend to continue to do so."

Hours earlier on Wednesday, Oregon Secretary of State Kate Brown, who would take over from Kitzhaber if he did step down, abruptly cut short her trip to the District of Columbia for a high-profile conference scheduled through Friday and flew home to the Pacific Northwest state. A spokesman, Tony Green, could not say why.

Kitzhaber himself canceled a planned weekend appearance to plant trees in a Portland suburb, according to a statement from the city of Tigard.

The hours before Kitzhaber responded to reporters' questions over his plans coupled with the event-cancellations prompted media speculation. Reporters camped out at Portland International Airport waiting for Brown to arrive and swarmed the capitol, in Salem, where whispers of a possible resignation, no matter how unfounded, spread like wildfire.

The state's flagship newspaper, the Oregonian, called for his resignation last week after endorsing his re-election bid, and he also faces recall petitions.

He previously said he would not step down and would cooperate with a criminal probe launched on Friday by Attorney General Ellen Rosenblum over a potential conflict of interest between Hayes' role in the governor's office and her private consulting business.

An earlier review by the state's ethics commission has been put on hold pending the outcome.

Media reports last week revealed that Hayes received $118,000 in previously undisclosed consulting fees in 2011 and 2012 from the Washington-based Clean Economy Development Center while advising the governor on energy policy.

He has said the couple did not see it as a potential conflict of interest and therefore did not feel it had to be reported.

He recently announced Hayes will no longer have a policy role in his office.