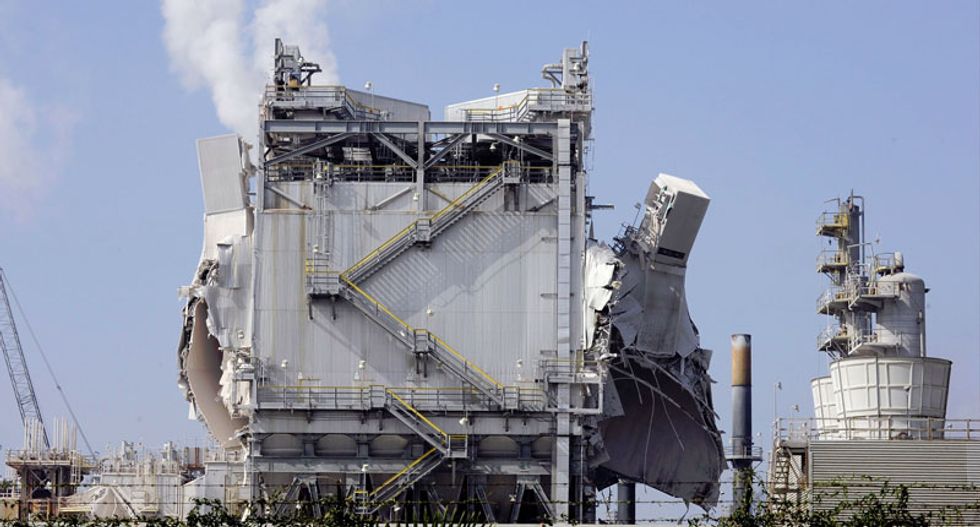 Refinery units are heavily damaged after an explosion at the Exxon-Mobil refinery in Torrance, California, February 18, 2015. REUTERS/Bob Riha Jr.

An explosion and fire ripped through a gasoline processing unit at an Exxon Mobil refinery in Torrance, California, near Los Angeles on Wednesday, slightly injuring three workers and shattering windows of surrounding buildings, authorities said.

The cause of the blast, shortly before 9 a.m. PST (11 a.m. ET), was under investigation, but there was no evidence of foul play, said Torrance Fire Captain Steve Deuel.

The injured workers suffered minor injuries and were treated at the scene by paramedics, Deuel said.

Torrance Mayor Patrick Furey told local television station KNBC in an interview that people who live near the refinery should take precautions.

"The most important thing is to shelter in place, stay indoors, no outdoor activity, turn the air conditioners off, keep the windows closed," Furey told the station.

Shares of Exxon Mobil's extended morning losses after the news before stabilizing. The shares were down 2 percent at $91 in afternoon trading on the New York Stock Exchange.

Deuel said a small ground fire following the explosion was quickly extinguished and that firefighters were working with refinery crews to contain a gasoline leak that resulted from the blast.

There was no evacuation of surrounding areas, but nearby schools were keeping students and staff indoors immediately after the blast as a precaution, Deuel said.

He said structural damage appeared to be confined to the processing unit that blew up, but the full extent of damage had yet to be ascertained.

"We're in the process of stabilizing the situation and there are no other issues happening," he told Reuters. Excess gasoline was being flared, or burned off, by the refinery, he added.

The explosion occurred near a fluid catalytic cracking unit at the refinery, according to David Campbell, the treasurer and secretary of the local chapter of the United Steelworkers, which represent operators at the plant.

Helicopter news footage on local television station KNBC showed a scene of twisted metal wreckage as firefighters poured streams of water on the refinery. A few vans were covered in ash and debris with their doors open.

Students at 14 schools near the refinery were ordered to shelter in place because of concerns over air quality, meaning students would not be allowed outside, Torrance Unified School District spokeswoman Tammy Khan told Reuters.

“We are taking every measure to make sure our students are safe,” Khan told a local media outlet.

The company said it was looking into the cause of the explosion, according to Gesuina Paras, a public and government affairs adviser at Exxon Mobil.

The incident came after the United Steelworkers walked out of 11 facilities, including nine refineries, after negotiations on a national contract stalled on Feb. 1. One of the central issues, according to the USW, is employee safety.