Fake kidnap of Missouri boy to teach him a lesson was 'born of intense and sincere love': lawyer 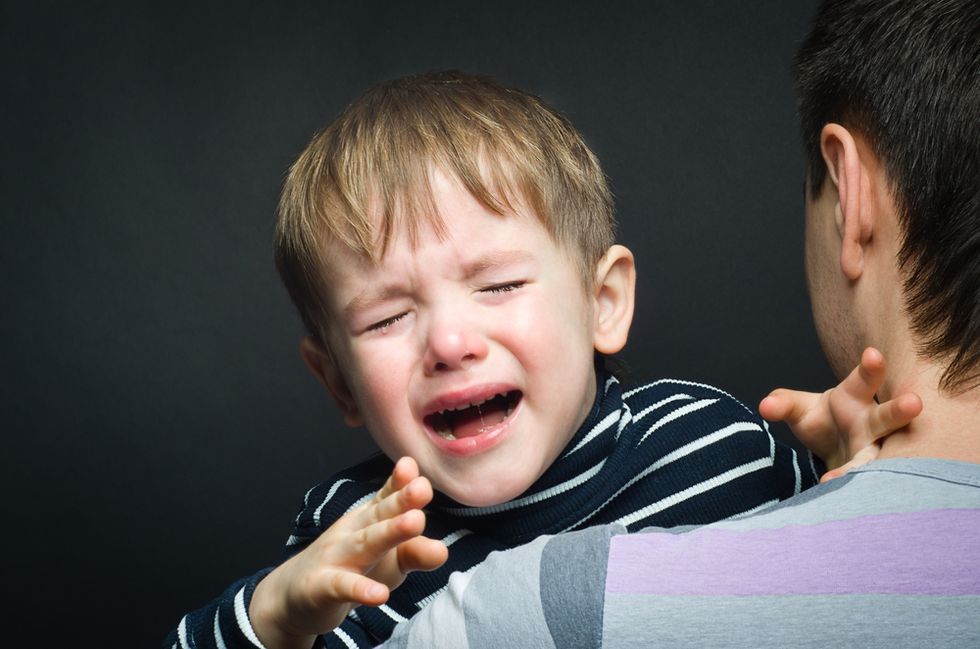 Portrait of a crying child in his father's arms (Shutterstock)

The lawyer representing the grandmother of the six-year-old Missouri boy whose family staged a horrific kidnapping to teach him a lesson about “stranger danger” has spoken about the family’s motivation for the crime.

Related: Missouri boy's family stages kidnapping to teach him the dangers of strangers

Charlie James, who also entered as counsel for the man who executed the kidnapping but said he would be withdrawing from that role, told the Guardian he had no problem agreeing with the rest of the world that the family “used extremely poor judgment in setting up the kidnapping”.

But, he said, their actions “were born out an intense and sincere love for the child and the desire to protect him from others by teaching him to protect himself”.

On 2 February, after he got off the school bus on his way home, a six-year-old boy was lured into a white pickup truck by Nathan Firoved, 23, of Troy, Missouri. According to court documents, as they drove Firoved told the child he would never see his family or “his mommy” again, and that he would be “nailed to the wall of a shed”.

When the victim – referred to as “JD” in court documents – would not stop crying, Firoved brandished a handgun and a packet of bullets, and told him he would be harmed if he didn’t stop. At one point, JD told investigators, he saw a police car – but was too scared to try to seek help.

The child’s mother, Elizabeth Hupp, had signed off on the plan - and was in regular contact through the whole process via cellphone with the kidnapper, who was a colleague of the child’s aunt.

“The intent here,” said James, “was to do something that would truly make the young child very leery about just talking to any strange man who happened to come along.”

All through the ordeal Firoved was sending Hupp, who was still at work, videos of her son, according to her interview with investigators. Hupp said she asked to stop receiving videos because she found their content “alarming”.

“Family members told investigators their primary intent was to educate the victim and felt they did nothing wrong,” the police said in a statement.

James said: “Many efforts had been made before to teach this child not to talk with strange men or go off with them. Nothing had worked. This action that brought about the present charges was the result of the [grand]mother, Rose Brewer, and her daughter having been scared out of their minds for the safety of the child. Their intent was certainly to frighten the child, but they did not see anything that occurred as ‘terrorizing’ the child.”

Firoved bound the boy’s hands and feet with plastic bags and covered his face with a jacket, so that he wouldn’t realise he was being brought to the basement of his own home. There, a woman removed his pants and told him he would be sold into “sex slavery”, according to court documents.

The woman was Denise Kroutil, the child’s aunt, who had asked Firoved to kidnap the child because he was “too nice” to people. She had sent a picture of JD to Fivored by text message, to help identify him.

Police said that after the ordeal in the basement the boy was brought upstairs, where family members lectured him about “stranger danger”.” The ordeal, according to police, lasted for four hours.

In an interview with police, Kroutil said the four had discussed “in detail” the circumstances surrounding the kidnapping, adding that they realised their actions would be “perceived as an actual kidnapping” if law enforcement became aware of them, but said that they planned to support Firoved in “explaining … the intent and course of action they had all agreed upon”.

The boy told his school teacher about the incident on Wednesday, and the school contacted child services under the state’s mandatory report laws. He has now been placed into protective custody with another family member, under supervision from the Missouri department of child services.

Lieutenant Andy Binder, public information officer for the Lincoln County sheriff’s office, told the Guardian that in 11 years of law enforcement experience he had never seen a case like it.

“This is completely unique,” he said. “Even the colleagues I work with haven’t heard of anything like this in the past.”

The case brought back uneasy memories for Binder, however – in 1978, as a child in Phoenix, Arizona, he was himself briefly abducted and held at knifepoint.

“It reminded me of the horror of what I went through,” he said. “Trying to translate that into a four-hour ordeal – and then the idea in the back of my head that this was orchestrated by my family – it would be catastrophic. It brought back some feelings; they were more of anger than of sorrow, just because I remember what I went through.”

“To put somebody through that at such a young age – it angered me.”

James, however, compared the family’s actions with a TV programme called “ Beyond Scared Straight ”.

“In that programme, with parental consent, the authorities take youngsters, some very young, to prisons and introduce them to the vilest dregs of society”, James told the Guardian.

“The difference is this: the former, the scared-straight programme, is sanctioned by state officials, who certainly have no love for the children they are dealing with, whereas in this case the ‘scare’ programme was carried out by the child’s family who love him dearly and of course do care what happens to him.

“Everything they said and did with that child, as with those parents who send their children to a ‘scared straight’ programme, was done in the hope of changing the child’s behaviour so as to lessen the chance that the child would be taken some day and never be seen again, or never be seen alive again.”