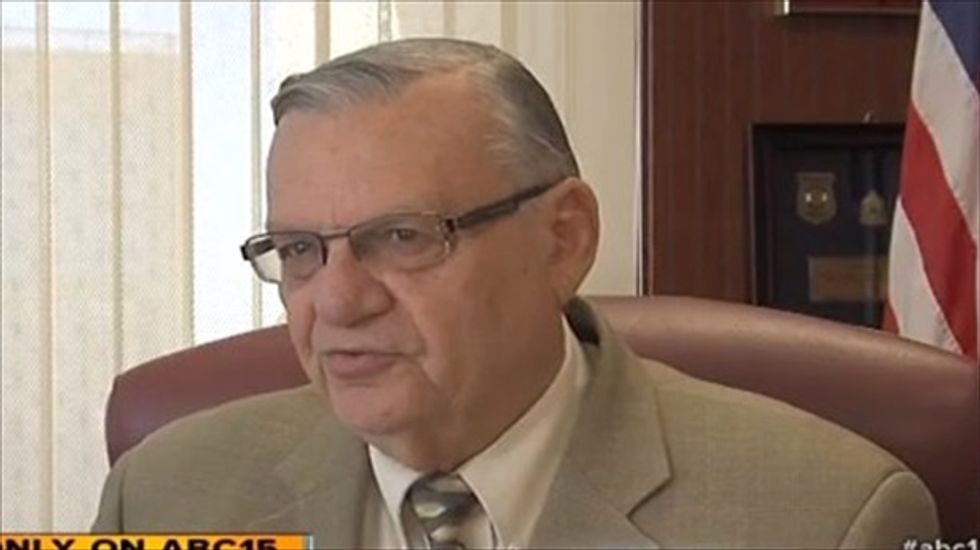 Controversial Arizona lawman Joe Arpaio and his top lieutenants will face a civil contempt-of-court hearing in April for repeatedly ignoring judicial orders arising from a 2007 racial-profiling case, a federal judge ruled on Thursday.

U.S. District Court Judge Murray Snow ordered the evidentiary hearing to be conducted after determining there was sufficient evidence to move ahead with the proceeding that could result in penalties against Arpaio, four other individuals, and the Maricopa County Sheriff's Office.

"After an appropriate hearing, the Court will determine whether these individuals have committed contempt of court and the sanctions for any such violations," Snow's order read.

Arpaio, 82, who bills himself as "America's Toughest Sheriff," could face fines or jail time along with other current and former officials cited in the ruling.

Snow, who had become increasingly frustrated with the sheriff and his office, set the hearing to take place April 21-24 in a federal courtroom in Phoenix.

A lawyer for Arpaio and the Maricopa County Sheriff's Office could not be immediately reached for comment.

The judge found in 2013 that Arpaio and his deputies racially profiled Latino drivers during traffic stops and unreasonably detained them, violating their constitutional rights, in a ruling that was a major blow to the six-term sheriff.

Snow installed a court monitor to oversee the operations of Arpaio's office and ordered that changes be made to help ensure there is no repeat of the offenses.

Arpaio, who has said he will run for a seventh term, has appealed the ruling and denied that his office was guilty of racial profiling.

In the latest ruling, Snow said attorneys for the Latino drivers had shown "sufficient evidence" to warrant the contempt hearing on a range of grounds, including failing to stop immigration enforcement operations as ordered by the court.

Also cited was an alleged failure by the sheriff's office to turn over evidence to the other side's lawyers during the trial.

Cecillia Wang, an attorney for the plaintiffs and director of the American Civil Liberties Union Immigrants' Rights Project, said there already is "abundant evidence" of Arpaio and his deputies violating the court's orders.

"No doubt we will see even more evidence develop during the evidentiary hearing in April," Wang said. "It is well past time for the sheriff's recalcitrance to end."