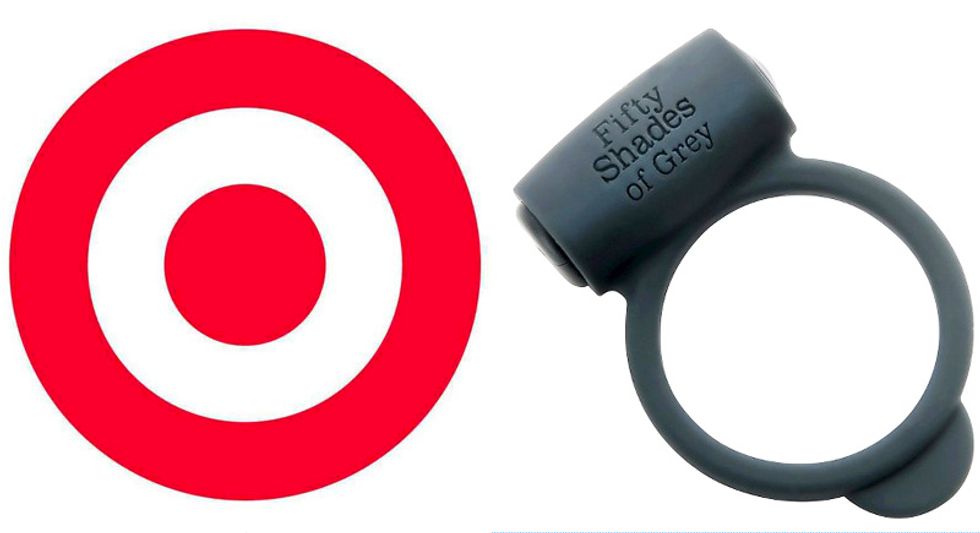 At my age, and considering what I wade through each day on The Internet, there isn't much that surprises me anymore. A Senator states that forcing restaurant employees to wash their hands after pooping is totalitarianism is kind of "meh, what else have you got?"

Bobby Jindal will be along in a minute and try to top it as he appeals to Lowest Common Denominator Americans so he can call "shotgun!" when the 2016 GOP presidential contenders load up the clown car.

However I have to admit that I was mildly surprised to see that the folks behind the upcoming lady-softsmut film, Fifty Shades of Grey have launched a merchandising campaign that goes beyond reissuing the three books with new covers.

In anticipation of such keen interest, mainstream retailers are stocking up on the pleasure industry’s blindfolds, whips, handcuffs and masks. Manufacturers have designed new packaging and products to fit the kinky tone and theme of the film, which is based on E. L. James’s story about a naïve young woman’s introduction to games of sexual bondage.

If you are not familiar with the book series, it sold over ONE HUNDRED MILLION COPIES making it almost as popular as the Bible, but with slightly less flagellation. When the books first became popular, it seemed to me that 3 out 4 moms I would see sitting on the beach reading were engrossed by one of the books, robotically popping little peeled baby carrots into their mouths like an old lady in a Reno casino feeding nickles into a slot machine. It was quite distracting to me due to the the panicky screams of their ignored children drowning in the ocean.

Hey, not my kids.

And why wouldn't they be absorbed by these softcore rom-dom classics offering breathless prose like this:

If you need to take a moment and clean yourself up with a moist towelette after those, I perfectly understand.

The film is being released the Friday before St. Valentine's Day -- allowing multiplexes time to install industrial-sized dehumidifiers and Scotchgard™ the seats -- and setting up a weekend of passion for suburban couples wishing to spice up their perfunctory strokey-lickey-pokey sex life with a little light bondage.

Remember kids: agree upon a 'safe word" in advance, and "ow," "what are you doing back there?" and "SportCenter is coming on" are not good choices.

And if you need some novelties to spice up the evening -- or weekend if you've purchased enough Nyquil to knock out the kids until they go back to school the following Monday morning -- you'll be happy to know that Target, which is Walmart for people won't go to Walmart, is there to lend a latex-gloved hand with Official Fifty Shades of Grey merchandise.

Even Target, one of the nation’s largest retailers, recently began selling an official “Fifty Shades of Grey” “vibrating love ring,” an item intended for wear by men, but not on the finger.

Trust me on that one.

Target is also offering "Fifty Shades of Grey Twin Blindfold" sets, although both sexual partners wearing blindfolds at the same time seems like it would make sex a tad more bumbling and fumbling than usual -- or maybe not; your groping may vary.

There is also officially-approved-by-author-EL James lube. Or as, Target puts it : "Ana, you're so wet," he murmurs against my body. "Oh my." - Christian Grey and Anastasia Steele.

And if that isn't enough to... okay, I'll say it, "Wet your whistle," there is always this:

Just wash it before you give it to the kids because: Ew.