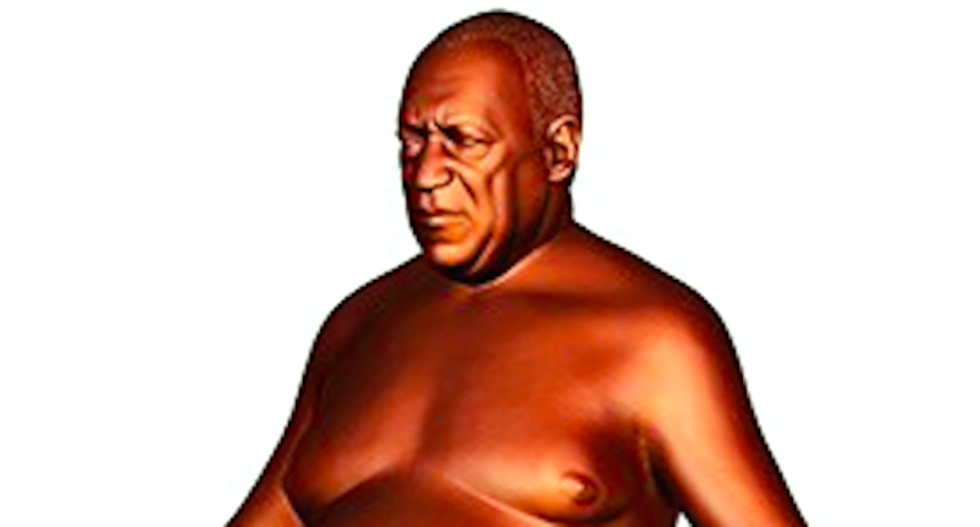 A teenage artist hopes to hand-build a bizarre bronze image of a nude Bill Cosby to highlight the sexual assault allegations against the comedian.

Edwards, from Turlock, California, hopes his sculpture will replace two others of Cosby on display at the Academy of Television Arts and Sciences Hall of Fame in Orlando, Florida, and North Hollywood, California.

The high school student is the son of sculptor Daniel Edwards, best known for his life-sized nude image of singer Britney Spears giving birth on a bearskin rug.

The proposed sculpture shows an obese Cosby standing nude with his arms extended and his genitals replaced with a bulbous Fat Albert, a cartoon character created and voiced by the comedian.

"I wanted to deal with this particular current event, because I was a big fan of Fat Albert when I was very young,” said Edwards, adding that he first asked his father if he had his own Cosby sculpture in the works.

“When he said no, I asked if I could work on this idea I had, and he was very encouraging about it,” the teen said. “He was happy with the results I came out with."

Edwards said the sculpture – which he intends as an accurate depiction of Cosby’s image now that the public has turned against him -- should take about six weeks to complete.

"I think that the TV Hall of Fame should most definitely replace their sculpture with this one," Edwards said. "I think that the real Bill Cosby should be on display, rather than the kind-looking Dr. Cliff Huxtable with a warm smile that people can see today. I want people to relate to my thoughts, and I think that by removing the current one, and replacing it with my interpretation, people can forget the old Bill Cosby, and remember him as the person he actually is."

Edwards is represented by Cory Allen, the gallery owner, but it's not clear whether the TV Hall of Fame would replace either statue.

“As a fan, I think I just felt compelled to depict two of Bill Cosby’s creations at odds with each other, because Bill Cosby seems to be at odds with what I always thought Dr. Huxtable stood for,” Edwards said.

See more of Edwards' artwork in this video posted online by August Edwards: