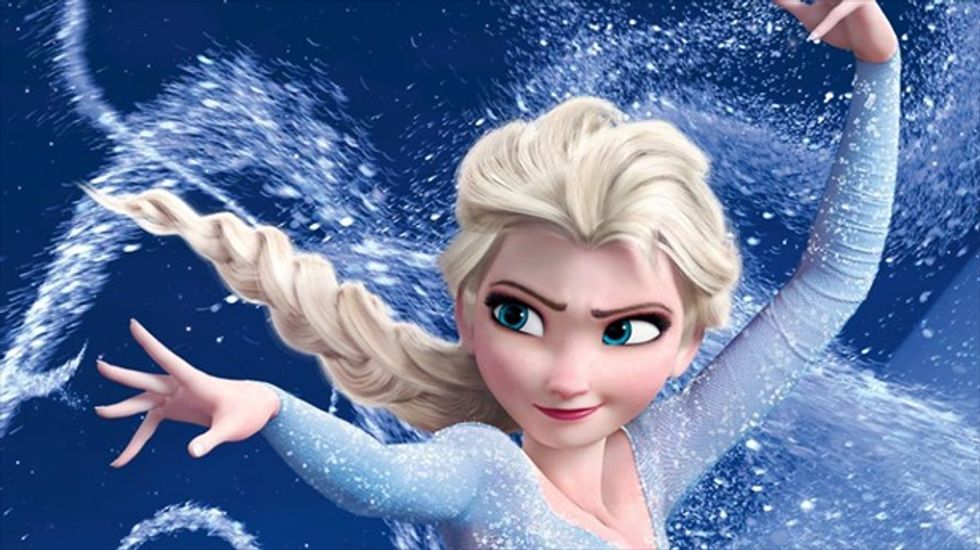 If you ever had any doubts that the concerns about "misandry" are not about actual man-hating, but an attempt to redefine female equality as anti-male, I present to you this Fox News segment that, while avoiding the silly word "misandry", basically pushes the message that all stories must have male heroes or else they are man-hating.

Oh sure, there's a weak-handed attempt to argue that there's some anti-male message in Frozen, but it's weak-handed because that might be the dumbest thing anyone has ever said about anything.  ""From what we've seen, it looks like Frozen depicts men as evil and cold and bumblers, that's what it looks like. What kind of message does that send?," Steve Doocy asks Penny Nance of Concerned Women for America, a group that would be better named Women Who Hate Women. He provided no examples of how Frozen specifically portrays men, as a group, as bad people.

"It's not just Disney; Hollywood in general has often sent a message that men are superfluous, that they're stupid, that they're in the way and if they contribute anything to the family, it's a paycheck. And that is not true, and it is not good social science," Nance agreed, again refusing to cite examples. Certainly she does not explain how Frozen argues that men are "superfluous".

Doocy got closer to the real complaint: ""It would be nice for Hollywood to have more male figures in those kind of movies as heroes."

That's right, folks. Men can be the heroes of 90% of movies, but anything less than 100% is misandry.

If you haven't seen Frozen, well, it's only like 90 minutes long, so go watch it. But it's made a fortune, so odds are you've seen Frozen. What you will find is that there is not a single whiff of the "men are bad" or "men are superfluous" message that Doocy and Nance claim to see there. Sure, one of the villains is a man. So is one of the heroes. And sure, some male characters are comic relief. But since when is it wrong to have a variety of male characters, some heroic and some villainous and some comic? It wasn't....until someone made a kid's movie that dared suggest that women might actually be interesting enough characters on their own to lead movies. There was no concern about the misandry of Star Wars or the misandry of Harry Potter, though both had male characters that are comic relief and male characters that are villains. All of a sudden, to avoid misandry, all male characters must be exactly the same: Square-jawed heroes who have no sense of humor. Fighting what, since men can't be villains anymore? I guess only women. That's the ticket!

Yeah, it makes no sense. But this clip is a perfect example of what's really going on when anti-feminists whine about "misandry": They are actually demanding male dominance. Frozen's attitude about men is not anti-male, but that they are human: Some are good, some are bad, there's a lot of diversity. The male hero, Kristoff, is quite competent and handsome, in fact. He's certainly not superfluous, as he is portrayed both as having a life of his own of value and as having value to Anna.

So clearly the actual offense of Frozen is that it dare posits that women may have stories to tell and not every story about a woman is actually about a man. It's interesting that the princess movies that are about women trying to find true love don't offend them---that's because those stories don't ruffle their belief that women exist for men. But what made Frozen different was it suggested that while romantic love is good and important, other relationships---often, relationships with other women, like your sister---also count. And, probably the scariest of all, it posited that your relationship with yourself matters, too, with Elsa's journey of accepting her own powers. That's a message I suspect that they would like to reserve solely for male audience members. Luke Skywalker learning his own strength? Bring it on! But a woman doing the same? MISANDRY.