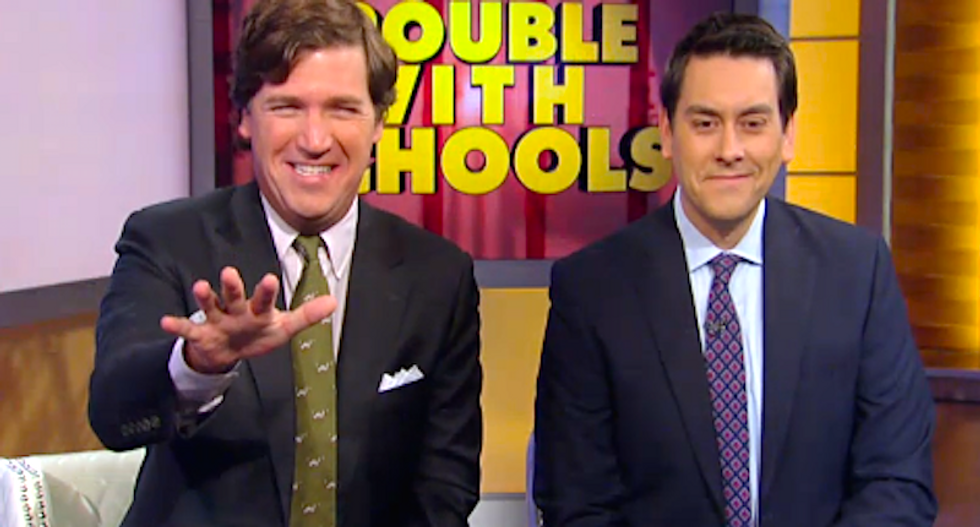 Officials at a North Carolina school are defending themselves after Fox News hosts claimed students were required to read politically incorrect books as part of Common Core standards.

"How’d you feel if your 9-year-old went to school and got lessons on the Black Panthers, police brutality, and amnesty for illegals,” said host Tucker Carlson on “Fox and Friends Weekend.”

The program reported that fourth-graders at Highcroft Drive Elementary School were required to read "Esperanza Rising," which deals with immigration, and "One Crazy Summer," which is about three sisters in the 1960s who attend a summer camp run by the militant civil rights group.

The hosts based their report on a series of blog posts on the “Stop Common Core NC” site, which is sponsored by the conservative Civitas Institute, that complained the material was not age-appropriate and offered a one-sided political narrative on controversial topics.

The institute said in a statement that classroom reading materials should “reflect the values and standards of the surrounding community” and demanded the school district create a “public, searchable list of all books and materials used in the classroom.”

A conservative education activist who appeared on the Fox News program described the assignments as the “Debbie Downer of homework,” suggesting the Roald Dahl novels “Charlie and the Chocolate Factory” or “James and the Giant Peach” instead.

“Kids in the fourth grade need to be taught things about creativity or that drive that love for reading,” said Caleb Bonham, editor-in-chief of Campus Reform. “The way to do that are more encouraging texts, not texts that are discussing police brutality and the evil racism that is America.”

However, school officials told WTVD-TV the blog posts misreported a number of facts about the assignment – including why it was assigned and to whom.

Principal Tanner Gamble said the widely acclaimed, award-winning books are not part of the Common Core curriculum, and they were assigned only to about 60 students as part of an enrichment activity.

The principal said parents were notified ahead of time and were permitted to choose alternative reading assignments for their children.

Gamble said he was disappointed that parents brought their concerns to the Civitas blog before notifying him, saying alternative arrangements would have been offered.