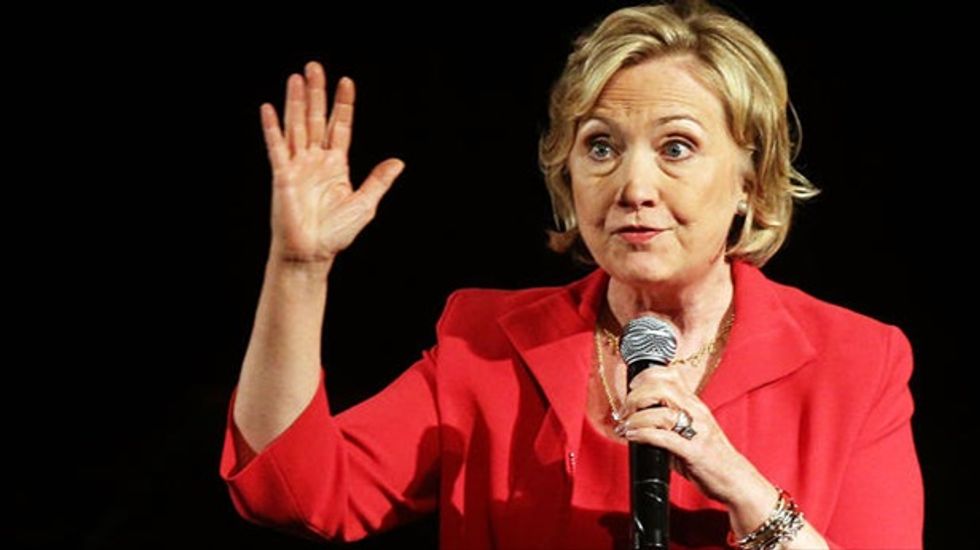 Hillary Clinton's connections to oil and gas interests has created a dilemma for some environmental groups, troubling activists for whom she would be the natural candidate to support for president.

The presumptive Democratic presidential candidate's environmental record has come under renewed scrutiny after the Wall Street Journal reported that the Bill, Hillary and Chelsea Clinton Foundation and the Clinton Global Initiative have accepted large donations from major energy companies Exxon Mobil and Chevron.

The groups also got money from foreign governments, including Saudi Arabia, the world's top oil exporter, and from an office of the Canadian government in charge of promoting the proposed Keystone XL oil pipeline, which would help transport crude oil from Canada to the Gulf of Mexico but is opposed by environmentalists.

"It's hard to believe that they don't think they are getting something for their contributions," said Ben Schreiber, head of climate and energy at Friends of the Earth, one of the largest environmental groups in the United States.

Clinton's spokesman referred requests for comment to the Clinton Foundation, which did not respond. The foundation has said it will reexamine its policy on accepting donations from foreign interests, if she runs.

The foundation's connections to the oil industry potentially complicate Clinton’s relationship with environmental groups, whose supporters form an important part of the Democratic base. Climate change is expected to be a big issue in the 2016 elections.

Any sign of ambivalence on climate change policies could hurt Clinton's support among progressive voters, said Jamie Henn, a spokesman for 350 Action, which claims a large network of environmental activists.

"This isn't an election where we can get some fancy rhetoric but no real commitments, said Henn, warning that 350 Action could target Clinton with rallies similar to the anti-Keystone protests it aimed at President Barack Obama if she fails to take a strong stand on climate.

Uncharacteristically, many green groups normally quick to attack politicians linked to oil and gas companies shied away from commenting on the Clinton Foundation’s relationship with these donors.

The Environmental Defense Action Fund had no comment because it does not have anyone with knowledge of the subject, a spokesman said. Another business friendly green group, the Natural Resources Defense Council Action Fund also declined, saying it would discuss the issues "when we have declared candidates." The World Wildlife Fund had no comment.

The reluctance to criticize Clinton reflects her mixed record on climate change. She has made two recent appearances at green-related events, addressing a League of Conservation Voters dinner in December, where she talked about the need to produce natural gas in a way that minimizes pollution. She also spoke at a green energy conference in September.

Her environmental record as secretary of state from 2009 to 2013 includes launching a global initiative to reduce emissions of soot and some greenhouse gases, though not targeting carbon dioxide, the main culprit in global warming.

But she was also an aggressive advocate, while secretary, for expanding the use of hydraulic fracturing, or fracking, to extract shale oil and gas in Eastern Europe, China and India under a program called the Global Shale Gas Initiative.

Many activists remain leery of her apparent support for building Keystone. In 2010, Clinton said she was "inclined" to approve the pipeline, which is still awaiting approval or rejection from the Obama administration.

Exxon has given about $2 million to the Clinton Global Initiative starting in 2009, while Chevron donated $250,000 in 2013 to the Clinton Foundation, the Wall Street Journal article said. The companies said their donations supported an array of global social programs, and the foundation said the funds support programs that help millions of people around the world.

Clinton's defenders in the environmental movement say U.S. strategic interests drove her support for the expansion of fracking into other countries.

"Introducing fracking to produce natural gas in Eastern Europe was an element of national security, the less dependence those nations have on Russian gas, the better off they are," said Daniel Weiss, the League of Conservation Voters' senior vice president for campaigns.

NextGen Climate, an advocacy group run by hedge fund manager-turned environmentalist Tom Steyer who has poured millions of dollars into Democratic party campaigns, said in a statement that Clinton had "made clear the primary importance of addressing this critical issue" of climate change.

Yet a recent NextGen blog accused oil companies of using their financial power to influence climate and energy policies in California, declaring: "We can't allow the fossil fuel industry to override what's best for our families, for our communities and for our economy."