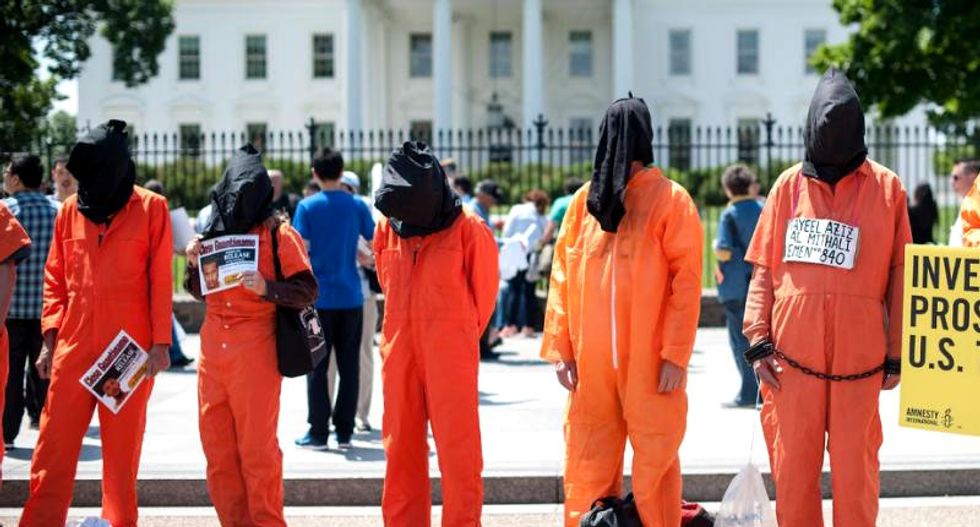 Protestors wearing orange prisoner jumpsuits call for the closure of the Guantanamo Bay detention facility in front of the White House in Washington on May 23, 2014 (AFP Photo/Nicholas Kamm)

A Chicago detective who led one of the most shocking acts of torture ever conducted at Guantánamo Bay was responsible for implementing a disturbingly similar, years-long regime of brutality to elicit murder confessions from minority Americans.

In a dark foreshadowing of the United States’ post-9/11 descent into torture, a Guardian investigation can reveal that Richard Zuley, a detective on Chicago’s north side from 1977 to 2007, repeatedly engaged in methods of interrogation resulting in at least one wrongful conviction and subsequent cases more recently thrown into doubt following allegations of abuse.

Zuley’s record suggests a continuum between police abuses in urban America and the wartime detention scandals that continue to do persistent damage to the reputation of the United States. Zuley’s tactics, which would be supercharged at Guantánamo when he took over the interrogation of a high-profile detainee as a US Navy reserve lieutenant, included:

• Shackling suspects to police-precinct walls through eyebolts for hours on end.

• Accusations of planting evidence when there was pressure for a high-profile murder conviction.

• Threats of harm to family members of those under interrogation used as leverage.

• Pressure on suspects to implicate themselves and others.

• Threats of being subject to the death penalty if suspects did not confess.

The Cook County state’s attorney office now has an examination open into a second conviction involving Zuley, filings in an Illinois court showed on Tuesday. (The Guardian is publishing the first part of its investigation on Wednesday.) While representatives of the state’s attorney’s office told the Guardian that the examination concerns only a single case, the office is seeking civilian complaint files regarding Zuley from a local independent police review authority.

Lathierial Boyd, convicted in 1990 of murder, accuses Zuley in a federal civil-rights lawsuit of planting evidence and withholding crucial details.

Boyd told the Guardian that Zuley had a racial animus as well. “No nigger is supposed to live like this,” he remembered Zuley telling him after the detective searched his expensive loft.

Other Chicago cases detailed by the Guardian, centering on three people interrogated by Zuley who are still in state prison, turned up evidence in police precinct houses of severe and internationally condemned tactics in Guantánamo Bay interrogation rooms.

Several of those techniques – prolonged shackling, threats about family, pressure to confess – used by Zuley bear similarities to those he enacted when he took over the interrogation of Mohamedou Ould Slahi at Guantánamo, described in official government reports and a best-selling memoirserialised last month by the Guardian as one of the most brutal in the history of the notorious US wartime prison.

After Zuley took over in July 2003, Slahi was subjected to even more extreme interrogation tactics: multiple death threats, extreme temperatures, sleep deprivation and a terrifying nighttime boat ride in which he was made to believe that worse was in store.

Most official accounts of Slahi’s torture have concealed or glossed over Zuley’s name.

A weeks-long Guardian investigation, unraveled from footnotes in Slahi’s memoir and involving thousands of police and court documents plus interviews with two dozen veterans of both Guantánamo Bay and Chicago criminal justice, complicates that history.

As Slahi did, inmates said they confessed untruthfully to try and stop the treatment by Zuley.

“Basically, they just tortured me, mentally, and somewhat physically, with the cuffs,” Benita Johnson, an inmate serving a 60-year murder sentence, told the Guardian from prison of the interrogation that led to her conviction.

Chicago has long had an institutional problem with police torture. An infamous former police commander, Jon Burge, used to administer electric shocks to Chicagoans taken into his station, and hit them over the head with telephone books. On Friday, Burge was released from home monitoring, the conclusion of a four and a half year federal sentenced – not for torture, but for perjury.

“There have been a number of really bad apples in the Chicago police department who unquestionably have railroaded unknown numbers of innocent people into prison,” said Rob Warden, the founder of Northwestern University’s Center on Wrongful Convictions. But Warden said he had “never heard of any case in which people graduated from Chicago to Guantánamo”.

Zuley, through a spokesperson, declined to cooperate with the Guardian’s investigation, despite multiple requests. Neither his attorney nor the Chicago police department responded to a detailed list of questions.

Mark Fallon, the former deputy commander of Guantánamo’s now-shuttered investigative task force for the military commissions, said Zuley’s interrogation of Slahi “was illegal, it was immoral, it was ineffective and it was unconstitutional.”

When Zuley took over the Slahi interrogation in 2003 – his name has gone widely unreported – he designed a plan so brutal it received personal sign-off from then-US defence secretary Donald Rumsfeld.

“The way that he approached interrogations at Guantánamo,” Fallon said, “if that’s any reflection of what he did in Chicago, it would not surprise me that he’s got a few issues going on right now.”