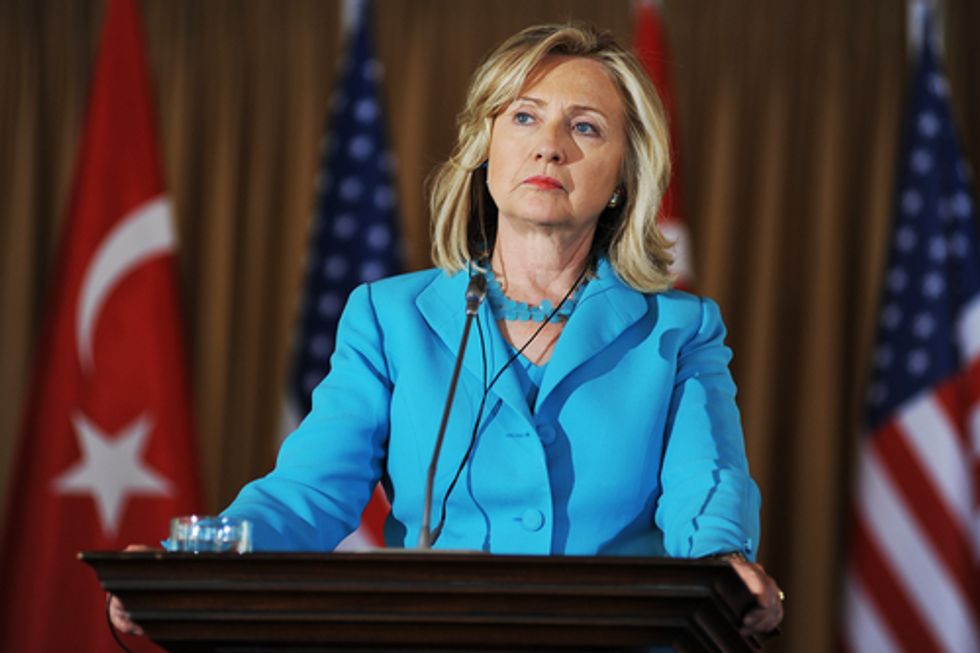 Hillary Clinton does not think your cheap sexism is amusing.

The next presidential election isn't for another 21 months, but of course, the potential candidates have started to rally support. And this is the point in the campaign season where Republicans can really fly that asshole flag high to rally the troops with very little concern about the public paying much attention, because there's just a low level of interest in these antics right now. Or, at least that's the explanation I'm settling on for this little stunt of Rand Paul's:

Yep, they set up a Pinterest page for Hillary Clinton. Because she's a woman and you know that women use that site, right? And women like Valentine's Day! Silly women, being all womanly and too busy thinking about hearts and flowers and tasteful living room arrangements to do important man stuff like being president.

I went to the page to screenshot and found it's already been taken down, which surprised me as most of the press attention to it has been fairly bland straight reporting or gleeful right wing gloating about how Rand Paul sure showed her. It had a lot of stuff about Benghazi on it---I don't think even the most avid followers of this wannabe scandal remember what exactly it's supposed to be about anymore---suggesting that is going to be the Republican narrative about Hillary Clinton: She's a lady and that means she's weak on foreign policy. It's sleazy as all fuck, but I'm not entirely surprised that's going to be the narrative, because what else do they really have? The irony is that it might end up backfiring. Most of the liberal opposition to Hillary Clinton is based around a fear that she's hawkish, and having conservatives go on and on and on about how dreadful they think it is that she doesn't go around starting wars for funsies might end up calming liberal fears and improving turnout for Clinton.

But man, mostly this is just egregiously sexist. There's nothing wrong with Pinterest---I have my own account and love it---but its association with femininity and domesticity makes it a pitch perfect weapon for provoking the anxieties of men who would be more comfortable with a woman decorating the White House than a woman sitting in the Oval Office. The fact that this was done on Valentine's Day, which is widely understood, especially in conservative circles, as some kind of "woman's" day, cinches it. This was an attempt to use her gender to hint that her role is more helpmeet than leader.

To my surprise, however, I didn't see anyone who covered this point out the obvious sexism of it. MSNBC focused on how it's meant to "bolster Paul’s brand as a tech-savvy Republican who can appeal to young voters", without noting that Pinterest is just as much associated with middle-aged moms and millennial voters. Jezebel was basically it, sarcastically noting, "It's the perfect gift because ladies love Pinterest, right?" I suspect if this happened closer to the election, however, it would cause fury across the land. So it was wisely timed, but still major asshole behavior.