Homeland Security unaware of any specific terrorist threats against US malls 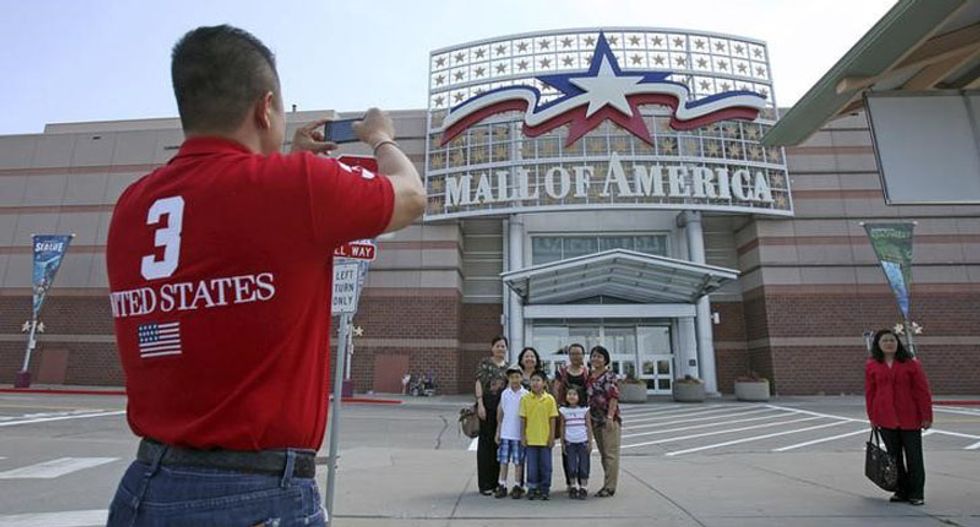 Visitors pose for a family photograph in front of an entrance to the Mall of America in Bloomington, Minnesota July 2, 2013. REUTERS/Eric Miller

WASHINGTON (Reuters) - The U.S. Homeland Security Department said on Sunday it was not aware of any specific plot against U.S. shopping malls, backing away from comments by the department's chief that he takes seriously a threat by Somali-based Islamist militants against the Mall of America in Minnesota and other shopping sites in the West.

Some U.S. and Canadian officials had earlier cast doubt on the credibility of the threat made in a video attributed to al Shabaab, which appeared to call for attacks on Western shopping areas, specifically mentioning Mall of America, the West Edmonton Mall in Canada, London's Oxford Street and sites in Paris.

Asked on the CNN program "State of the Union" on Sunday morning about the threat to Mall of America, Homeland Security Secretary Jeh Johnson said: "Anytime a terrorist organization calls for an attack on a specific place, we've got to take that seriously."

He advised people going to the Mall of America, which is one of the world's largest shopping areas, to be particularly careful.

"As a general matter, however, we are not aware of any specific, credible plot against the Mall of America or any other domestic commercial shopping center," she said in a statement.

One U.S. intelligence official said security officials are indeed worried about the risk of an attack on U.S. soil by a solitary militant, but al Shabaab as a group has not appeared to gain much traction with most Somalis in the West, including in Minneapolis.

"In balance, I don't think this video adds much on top of the ubiquitous 'lone offender' threat,” said the official, who spoke on condition of anonymity.

Staff Sergeant Brent Meyer of Canada's Royal Canadian Mounted Police said "there is no evidence at this time of any specific or imminent threat to Canadians." In Britain, a spokesman said London police were aware of the video and were assessing it.

Minnesota is home to a sizeable Somali-American population. U.S. law-enforcement officials have been concerned about the potential for radicalization among some of the community.

A Minnesota man was indicted last week on charges of conspiring to support Islamic State and lying to federal agents investigating recruitment by militant groups.

Prosecutors said dozens of people from the Minneapolis-St. Paul area, many of them Somali-Americans, have traveled or attempted to travel overseas to support militant groups such as Islamic State or al Shabaab since 2007.

"This latest statement from al Shabaab reflects the new phase we’ve evolved to in the global terrorist threat, in that you have groups such as al Shabaab and ISIL publicly calling for independent actors in their homelands to carry out attacks," Johnson told CNN, using an acronym for Islamic State.

Privately owned Mall of America, located in Bloomington, near Minneapolis, has about 40 million visitors a year, and contributes nearly $2 billion in annual economic activity to the state of Minnesota, according to its website. Major stores in the complex include retailers Aeropostale , H&M and Macy's .

The West Edmonton Mall in Alberta gets about 30.8 million visitors a year, according to its website. Oxford Street is one of London's busiest shopping areas, home to several large department stores.

Al Shabaab was behind a 2013 attack on the high-end Westgate shopping mall in Nairobi, Kenya that killed 67 people, raising fears about mall safety around the world.