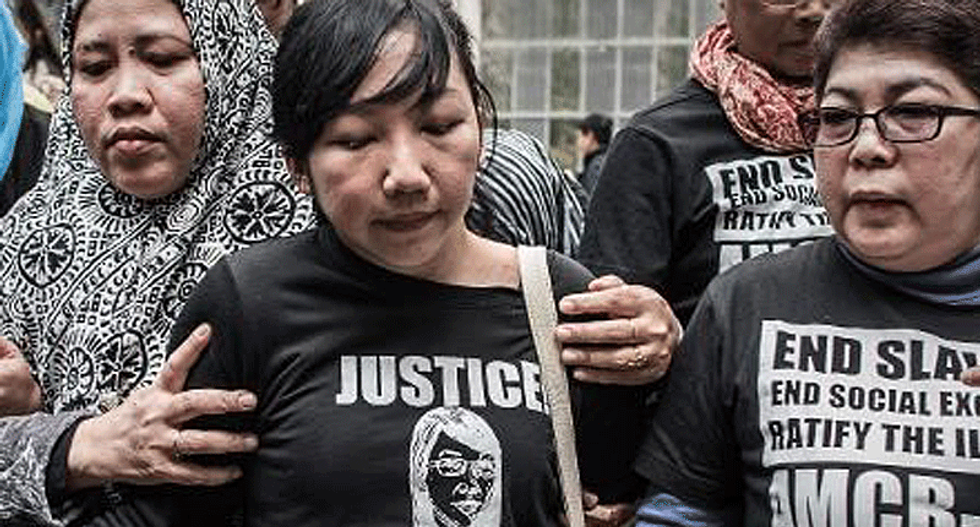 Indonesian former maid Erwiana Sulistyaningsih (C) leaves the court of justice in Hong Kong on February 10, 2015 after her employer was convicted of beating and starving her in a "torture" case that sparked international outrage (AFP)

A Hong Kong woman was jailed for six years on Friday for beating and starving her Indonesian maid and keeping her prisoner, as the judge called for action over laws which leave domestic workers exposed to abuse.

But while victim Erwiana Sulistyaningsih said she was happy and "appreciated" the judgement, she felt that six years was not long enough.

"I'm still not satisfied with six years' imprisonment, because of what she has done to me, and to my fellow domestic workers," Sulistyaningsih told reporters.

Law Wan-tung -- who had faced a maximum sentence of seven years -- "showed no compassion" to Sulistyaningsih and other domestic staff, said judge Amanda Woodcock in handing down the sentence.

Law saw her staff as "people that are beneath her" said Woodcock.

"It is regrettable that this conduct is not rare and sadly is often dealt with in the criminal courts," she added.

The judge called for an investigation by Hong Kong and Indonesian authorities into employment agencies that charge domestic workers huge fees which are then deducted from their salaries.

Of Sulistyaningsih's treatment she said: "She was given little rest, sleep and nutrition which left her a shadow of her former self."

Sulistyaningsih, 24, told a Hong Kong court in December how she lived on meagre rations of bread and rice, slept only four hours a day and was beaten so badly by her employer Law that she was knocked unconscious.

During the six-week trial, prosecutors said mother-of-two Law, 44, turned household items such as a mop, a ruler and a clothes hanger into "weapons" against her maids.

Law was convicted on 18 of 20 charges against her, including grievous bodily harm, assault, criminal intimidation and failure to pay wages.

Woodcock said that domestic staff are made vulnerable by a law which means they must live with their employer -- which activists have long campaigned to change.

"Such conduct could be prevented if domestic helpers were not forced to live in their employer's home," she added.

Woodcock highlighted the "significant fees" charged to domestic helpers by agencies in their home countries.

"There must be an element of exploitation here... the domestic helper becomes trapped when they are unhappy, but cannot leave or change employers because the debt needs to be paid off," she said.

Wearing a T-shirt emblazoned with her own face and the word "justice", Sulistyaningsih said she felt the six-year sentence "doesn't guarantee she (Law) will not hurt others".

But she praised Woodcock.

"I sincerely appreciate the judgement of the judge, who today exposed that slavery in Hong Kong really exists," Sulistyaningsih said via an interpreter.

"I hope that the Hong Kong government and Indonesia government will reform the regulations so other victims and cases not yet exposed can appear in the public."

Activists welcomed the judgement, but remained reserved over whether it would bring change.

"It could send a message to other employers who are doing similar things," said Aaron Ceradoy of Asia Pacific Mission for Migrants.

"Whether it will be effective remains to be seen."

Lawmaker Claudia Mo of the Civic Party said that Law had "brought shame to Hong Kong".

"It's a good starting point for the government to seriously think about how things could get better," she said.

But Mo questioned how domestic helpers could be accommodated outside their employers' homes because of lack of housing.

Pictures of Sulistyaningsih looking frail and emaciated, in a critical condition at an Indonesian hospital in January last year after she left Hong Kong, focused the spotlight on domestic helpers' rights.

The city is home to nearly 300,000 maids, mainly from Indonesia and the Philippines, and criticism from campaign groups over their treatment is growing.

Amnesty International in 2013 condemned the "slavery-like" conditions faced by thousands of Indonesian women who work as domestic staff and accused authorities of "inexcusable" inaction.