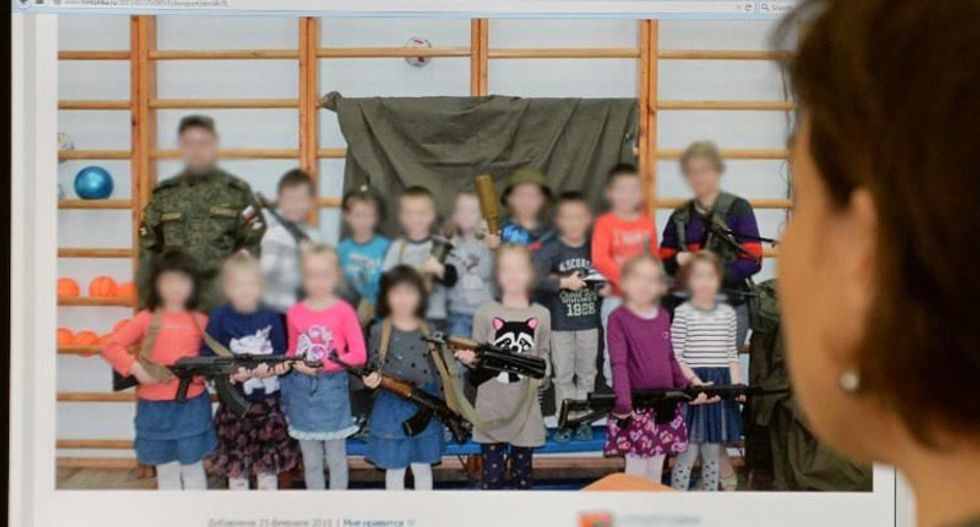 A woman in Moscow looks at a computer screen on February 26, 2015, displaying a photo showing young children posing with replica weapons at a kindergarten in Saint Petersburg (AFP photo)

Pictures of young Russian children posing with mock AK-47 rifles and other weapons at a kindergarten have provoked a storm of controversy, but some defended them as patriotic education.

Pictures making the rounds online show boys and girls around five or six years-old posing for cameras with mock-ups of AK-47 assault rifles, a sniper rifle and a grenade launcher in their hands.

Some children wear helmets or military berets, a man in fatigues standing next to them.

The controversial photos were taken last week during a "patriotic class" at a kindergarten in the second city of Saint Petersburg, said a member of a club who helped organise the event and provided the replica weapons.

He said the event was held ahead of the Defenders of the Fatherland, a Soviet-era holiday Russia marks on February 23, at the request of the kindergarten administration.

"It's silly to teach children patriotism using layman's terms. Telling without showing would not be right."

He defended the class and photo-shoot, saying children must grow up as patriots. But he said they were not taught how to use weapons.

"The sniper rifle was without a scope," he added.

The children's parents, one of whom is a member of the Red Star club, approved of the event, Dorozhinksy said.

But the pictures triggered a storm of controversy on Russian social networks.

"This is simply horrible and outrageous," commented Larisa Garmash.

The director of the Saint Petersburg kindergarten which apparently held the event, Margarita Ivanova, declined to comment when reached by AFP.

The director of another kindergarten in the city said the fact that children had been forced to pose with weapons was "unacceptable."

"This is not a patriotic upbringing," Irina Gosteva told AFP. "This has no place in a kindergarten."

Some observers warn of the creeping militarisation of Russian society amid raging tensions with the West over Ukraine where pro-Moscow separatists have been battling government forces since April.