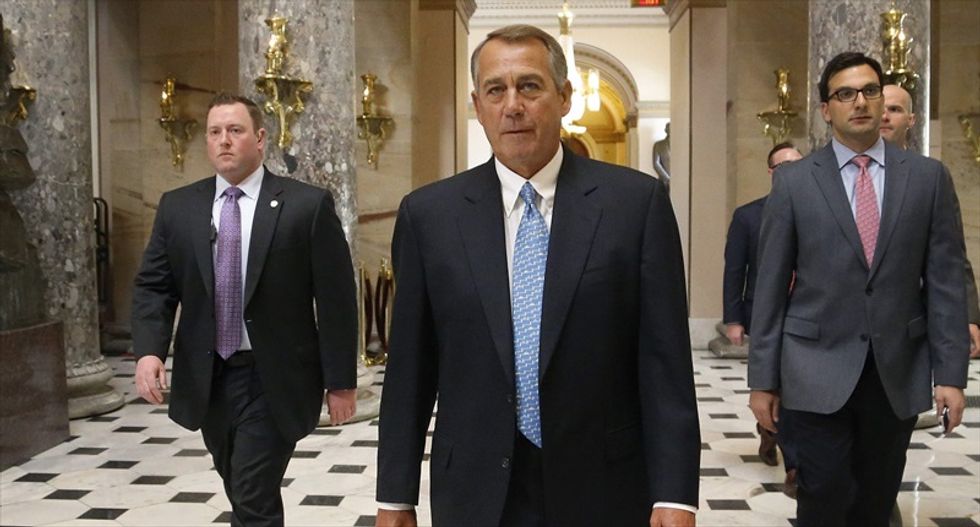 House Speaker John Boehner (R-OH) (2nd R) returns to his office after a visit to the House floor for procedural votes for legislation to fund the Department of Homeland Security at the Capitol in Washington on Feb. 27, 2015. Photo by Jonathan Ernst for Reuters.

The House of Representatives on Friday failed to approve a stopgap funding bill for the U.S. domestic security agency, increasing the threat of a partial agency shutdown at midnight.

With just hours left before spending authority expires for the Department of Homeland Security, a three-week spending bill was rejected in the House by a 224-203 vote, leaving lawmakers with few options ahead of the deadline.

Congressional leaders made no immediate comment about their next step in a political battle sparked by Republican efforts to block funding for Democratic President Barack Obama's executive orders on immigration by attaching provisions to the department spending bill.

If current funding is not extended by Friday at midnight, spending authority will be cut off for the agency that secures U.S. borders, airports and coastal waters. The agency would be forced to furlough about 30,000 employees, or about 15 percent of its workforce.

Nearly 200,000 workers, including airport and border security agents and Coast Guard personnel would stay on the job, but would not be paid until new funding is approved.

Created after the Sept. 11, 2001 attacks, the department is a super-agency that encompasses the Coast Guard, the Secret Service, the Transportation Security Administration and immigration, customs and emergency management authorities.

Following a different path on Friday, the Senate approved a full-year, $39.7-billion funding measure for Homeland Security that excludes the restrictions on Obama's immigration order that House Republicans had been demanding.

Last November, the president issued orders, without going through Congress, that lifted the threat of deportation for millions of undocumented residents. A federal judge put a temporary hold on the orders.

It was unclear if House Speaker John Boehner could take up the Senate bill, and if he did, he would risk angering House conservatives who have said passing any funding for the agency that does not include immigration restrictions amounts to surrender to Obama.

Obama and Homeland Security officials have warned that even a short, partial shutdown could hurt the agency, interrupt hiring and create more uncertainty for a department that spearheads domestic counter terrorism efforts.

House Republican leaders worked through the day to line up support for the short-term extension, despite Democratic demands for a full year of agency funding, and conservative insistence that any spending bill include the immigration restrictions.