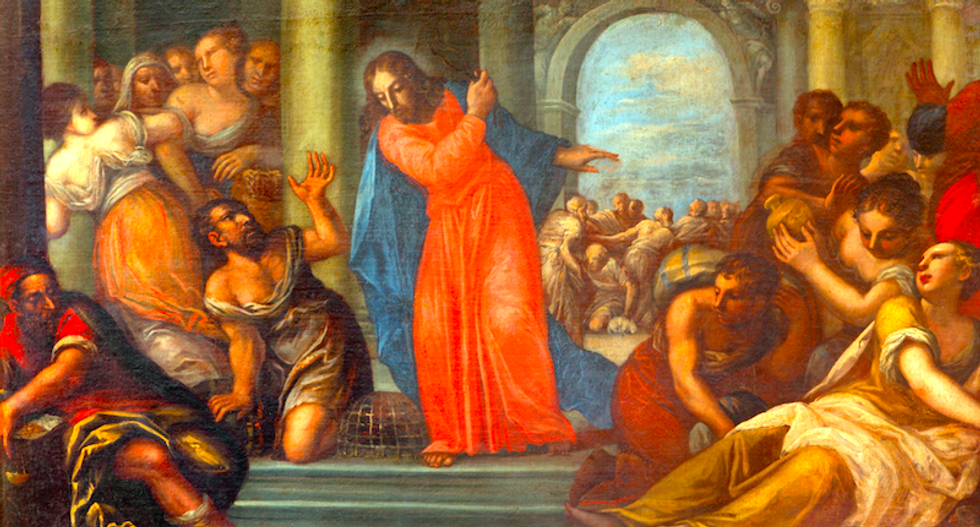 Jesus casts the moneychangers out of the Temple (Shutterstock)

Religious politicians have attempted to claim moral authority over their enemies at various points in U.S. history by enshrining the phrase, “In God we trust,” into law.

But not all religious authorities agree that the phrase should be used in political life, saying it excluded non-religious Americans, insulted Christ, and was essentially meaningless, reported The Oregonian.

"If you are a real believer, God is the creator, the redeemer, the one who makes things holy," said Martin Marty, emeritus professor at the University of Chicago Divinity School. "I'm going to reduce him to be a generic term? Doesn't work."

The phrase was first minted onto coins during the Civil War, and Congress declared it the national motto during the Cold War.

Religious conservatives are now trying to display the motto in more government spaces in reaction to what they see as an increasingly secularized political culture.

"The breakdown of the family is our biggest problem,” said Jacquie Sullivan, head of the nonprofit In God We Trust ~ America, Inc. “I think it's a parent's responsibility to take their children to church and read the Bible in the home. The family that stays together prays together."

Although most Americans still identify as Christian, religious conservatives feel marginalized in a culture where atheism is becoming less stigmatized, Steven Green, head of the Center for Religion, Law and Democracy at Willamette University.

“There are enough evidences of government hostility, media hostility and Hollywood hostility to fuel this movement,” Green said. “It's attractive to religious conservatives, this narrative that they have become oppressed.”

"Some of this is probably in reaction to Obama, because there has been this perceived notion that he is hostile to religion,” Green added.

The chairman of the Clark County, Washington, Board of Councilors said communities should embrace the motto to encourage national unity against Islamic militants.

“We are part of a nation, and that nation has a motto,” said David Madore, the county official. "It would be improper and unwise to deny or shun it. It is who we are and it is our roots.”

"It's not to Allah and its not to gods, it's not to anyone else,” he continued. “It is what it is and we are not here to change it. We are here to recognize it and cherish and value and respect our heritage."

Green said it’s “embarrassing” when conservative Christians claim they have no religious motivation to enshrine the phrase into law.

“Because they are people of faith, to say this isn't religious is really inconsistent,” he said.

Marty said the motto isn’t a beneficial way for Christians to share their faith and may even violate Christ’s teachings.

"Jesus is very explicit: when you pray, go in to your private room and pray in secret,” Marty said. “Beware of practicing your piousy before men.”

"When you try to brag about it and impose it on others, that's where the trouble comes in," he added. "As a principle, I think we're cheapening things. We're cheapening God and the integrity of the faith of people who really do believe."

US health authorities on Tuesday recommended pausing the Johnson & Johnson Covid shot over blood clot fears, with the company quickly announcing it would delay its European rollout, in a setback for global immunization campaigns.

Out of nearly seven million Americans who have so far received the single dose vaccine, six women between age 18 and 48 developed a rare type of clot in the brain along with low platelets, officials said.

Greenberg, who was a close friend of Gaetz's, reportedly received $900 from the Florida congressman via the money app Venmo. He then turned to pay three women $300 each, one of whom had just turned 18. According to the descriptions, the reasons for the money were "tuition" and "school."