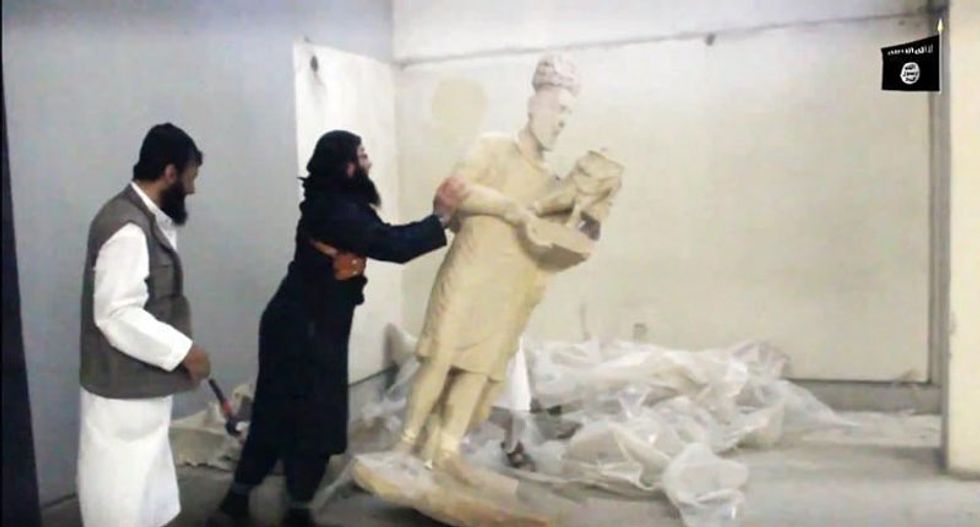 An IS militant is seen knocking over a statue inside the Iraq's Mosul museum, in a video released by the Islamic State (IS) group on February 25, 2015 (AFP)

The Islamic State group released a video Thursday in which militants in Iraq are seen destroying ancient artefacts that included idols, which are prohibited by the Muslim faith.

The five-minute video shows militants at the museum in Mosul knocking statues off their plinths and smashing them to pieces with sledgehammers.

In another scene, a jackhammer is used to deface a large Assyrian winged bull at an archeological site in the city, which the Sunni extremist group captured last summer.

"Muslims, these artefacts behind me are idols for people from ancient times who worshipped them instead of God," said a bearded militant speaking to the camera.

"The so-called Assyrians, Akkadians and other peoples had gods for the rain, for farming, for war... and they tried to get closer to them with offerings," he goes on.

"The prophet removed and buried the idols in Mecca with his blessed hands," he said, referring to the Muslim prophet Mohammed.

They include many pieces from the Assyrian and Parthian eras dating back several centuries before Christ.

Iraq's Assyrians are now a Christian minority who consider themselves to be the region's indigenous people.

Several Assyrian villages were seized by IS fighters in neighbouring Syria in recent days and at least 220 Assyrians kidnapped in the process.

The jihadists have controlled Mosul, Iraq's second city, since seizing it in a June offensive that saw them conquer large parts of the country.

They have systematically targeted minorities in and around Mosul and destroyed heritage sites, sparking global indignation.

A disturbing video has emerged on social media, showing a man who has been identified as a U.S. Army sergeant harassing and threatening a Black man who was walking through a South Carolina neighborhood.

The video, first uploaded to Shirell Johnson's Facebook page, shows a man identified by social media users as U.S. Army sergeant first class Jonathan Pentland walking alongside a young Black male only identified as Deandre, asking him what he's doing in the neighborhood and aggressively telling him to leave. At one point in the video, Pentland pushes Deandre.